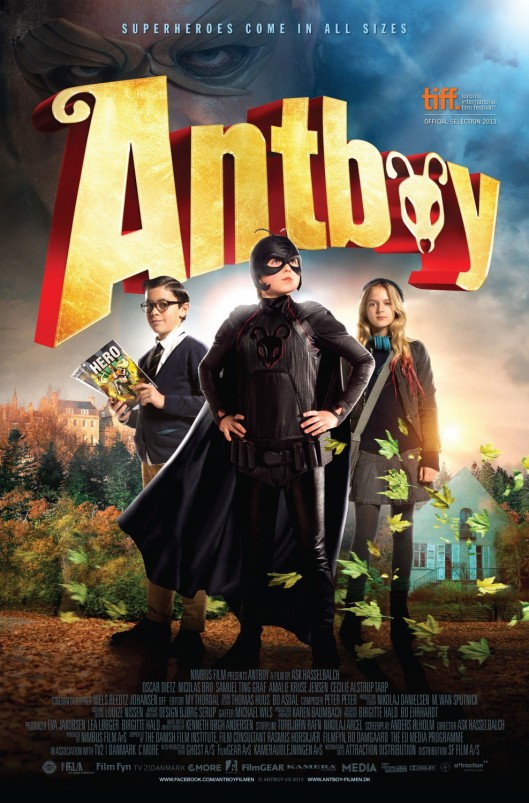 Based on the books by Kenneth Bøgh Andersen, Antboy is Denmark’s first superhero movie, a “small” tale about twelve year old Pelle who gets bitten by a radioactive ant.

Pelle is one of the ordinary kids, he doesn’t stand out in any way, he’s not particularly noticeable, and he has a crush on Amanda (Tarp), a girl in his class who, in classic fashion, doesn’t even know he exists.  One day after school he sees two bullies harassing comic book nerd Wilhem (Graf).  He intervenes, which saves Wilhelm, but leads to Pelle’s being chased by the bullies.  He evades them by hiding in the garden of an empty house.  Just as the coast is clear he is bitten by an ant.  Pelle passes out, and when he comes to, he goes home without a clue that everything has changed for him, and that he now has superpowers.

The next morning Pelle’s new powers begin to manifest themselves: his hand sticks to a milk carton, he has incredible strength, his sense of smell is heightened, and perhaps most worryingly of all, he discovers he can pee formic acid.  With Wilhelm noticing some of these things, it isn’t long before the two of them are finding out the extent of Pelle’s powers and deciding he needs a superhero costume to go with them.  And so, after dismissing Antman because Pelle isn’t married (or a man), Antboy is born, and he quickly becomes a hero in his local community, apprehending muggers and saving people from car crashes.

Which proves to be a good thing as soon there’s a super-villain on the loose, The Flea (Bro).  The Flea is the scientist who was responsible for creating the ant that bit Pelle, but who now has replicated the same formula but using – you’ve guessed it – a flea instead of an ant.  He kidnaps Amanda and it’s up to Antboy and Wilhelm, aided by Amanda’s sister Ida (Jensen), to rescue her and bring The Flea to justice. 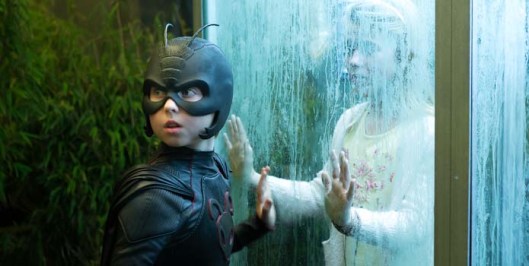 If you’re already thinking “blatant Spider-Man rip-off” then put it to the back of your mind and move on.  Antboy does take the basic template of the Spider-Man story but then riffs on it in its own, unique way.  For a start, and thanks to Pelle’s age, we’re spared the teenage angst that comes with Peter Parker’s story, and there’s none of that “with great power comes great responsibility” baggage either.  Instead, Pelle grows in confidence and enjoys being a superhero.  He retains his secret identity without putting others at risk all the time, and he develops a bit of a crush on Ida (there’s also time for a bit of payback on the two bullies).  It’s this guilt-free approach that helps make Antboy so enjoyable.

The casting is a plus as well.  Dietz has a cherubic face and surprisingly expressive eyes; when he has his Antboy mask on you can still see how he’s feeling.  He’s a very confident young actor and doesn’t appear daunted by the material in the least.  In fact, he makes it all look easy, and the movie, while never dull, always picks up a bit when he’s onscreen.  As his sidekick and chief costumier, Wilhelm, Graf sports big glasses and a grave manner throughout, and is more Alfred than Robin.  It’s a little bit worrying that Wilhelm is so handy with a sewing machine, and that he has one in his room, but it’s a nice touch nevertheless, and anyway, what superhero origin story doesn’t have the odd idiosyncrasy?  Bro, who looks too much like Timothy Spall at times, is a fun adversary and has pleasingly low-key reasons for his villainy (no destroying the world for him), and his costume is quite impressively detailed.  Jensen and Tarp are given little to do in comparison, but as the focus is quite rightly on the boys, this is unavoidable; the short running time doesn’t help either.

As directed by Hasselbalch, Antboy is a superior entry in the superhero arena, with deliberately simple and effective special effects, and a charming approach to what it would mean to a pre-teen if this were to really happen.  The script, by Anders Ølholm, is entertaining and precise, and the characters are clearly drawn and well fleshed out by the talented cast.  There are plenty of humorous moments, and the encounters between Antboy and The Flea are well-orchestrated.  With its slender running time, Antboy packs a lot in and leaves the viewer wanting more, so the expected sequel (due by the end of 2014) will come around with not a moment to spare.

Rating: 8/10 – an engaging treat for those superhero fans who might like to see a less darker, more simple movie than we’re being treated to at the moment; winning in all departments, Antboy shows how a lot of imagination can be achieved on a low budget.