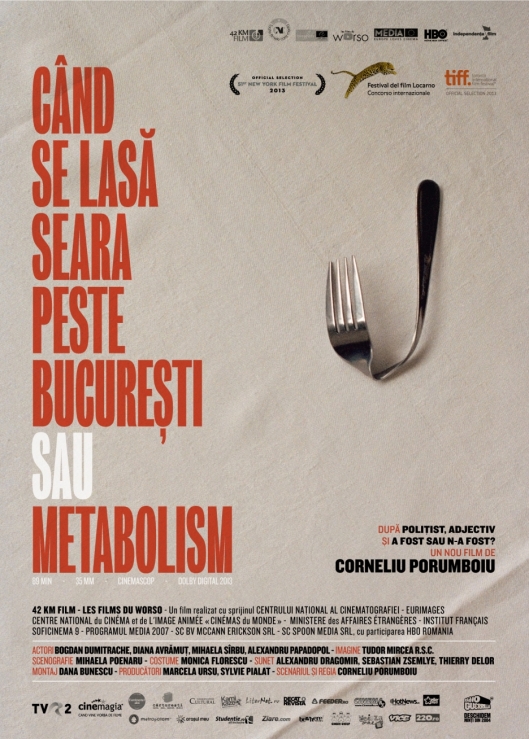 Paul (Dumitrache) is a writer/director making his latest movie. He hasn’t worked with his lead actress, Alina (Avramut) before, but he likes to challenge her over her interpretation and understanding of the script as well as her personal opinions on topics such as shooting on film as opposed to digitally. One day during the movie’s production, Paul fakes a stomach problem and lets his producer, Magda (Sirbu) know that he can’t work; instead he meets up with Alina. They rehearse a scene where Alina’s character gets out of the shower, and as she gets dressed, overhears a conversation involving the male lead character. She and Paul discuss the various reasons for her behaviour during the scene, and try and pin down the various actions that will be involved. Afterwards they have sex.

As the day progresses they have lunch at a Chinese restaurant, and much later, they run into Magda at a hotel where some of the cast are staying. Magda isn’t happy with the male lead’s behaviour from the night before, and she’s also unhappy with Paul because she doesn’t believe his assertion that he’s seen a doctor and had an endoscopy carried out. Afterwards, Paul and Alina continue to block out the shower/dressing scene, going over it time and again in their efforts to fine tune the motivation of Alina’s character. Later, they eat out at another restaurant, where they are joined briefly by Laurentiu (Papadopol), one of Paul’s fellow movie makers. He mentions that Alina has the look of Monica Vitti about her, but Alina doesn’t know who that is. Paul is surprised, and when they leave they talk about the differences between theatre – which is Alina’s professional background – and cinema.

The next morning they meet up before heading for the day’s shooting location. There, Paul gives Magda a copy of the endoscopy exam to watch with a doctor called to the set. Despite some irregularities, the doctor is satisfied, though Magda remains convinced Paul has falsified the recording, though she can’t figure out why. And in a conversation with a makeup lady, Alina reveals its her last day on the production.

The so-called Romanian New Wave has been responsible for a number of stark, minimalist movies in the last ten years, most of them poignant, subtle explorations of the effects of Communist rule on the lives of everyday people. Some movies, such as The Death of Mr. Lăzărescu (2005) and 4 Months, 3 Weeks and 2 Days (2007), have found an international audience and been critically applauded. And Porumboiu himself has been feted for his previous movies, including Police, Adjective (2009). Here, he adopts a rigid, formal approach to what is essentially a diffused romantic two-hander, as Paul attempts to both impress and manipulate Alina into giving the performance he’s looking for, and in the process, foster a relationship that, deep down, he knows will only be temporary.

Beneath his rigorous, intellectual demeanour however, Paul is a fraud: pompous, insecure, and insincere. He wants Alina to appear naked in his movie and uses the notion that she’ll be thankful fifty years on that she’ll have a permanent reminder of her youth and beauty. Alina turns the tables on him, though, and shoots down his argument by asking the simple question, what makes him think people will be watching his movies in fifty years’ time? It’s a lovely moment, Paul’s presumptuous ideas punctured without a trace of animosity, and showing just who has the upper hand in their relationship. As the movie progresses, and Paul’s continued attempts to gain some measure of control become less and less effective, Alina reveals more and more of the determination and poise that have been there all along, but which Paul has been too blinkered to notice. The moment when Alina reveals she’s never heard of Antonioni (let alone Monica Vitti) is a wonderful indication of how unconcerned she is by Paul’s cinematic posturing.

Both Avramut and Dumitrache excel in providing well-considered, measured performances, making even the blandest of Paul and Alina’s interactions more intriguing and suggestive than they appear on the surface. Avramut keeps Alina’s face in repose for most of the movie, deflecting Paul’s advances with cool detachment and engaging with him on her own terms. Dumitrache evinces disappointment and dismay, giving Paul the air of a man for whom this isn’t his first experience of being out-manoeuvred by his leading lady. Their relationship is one full of delicate cuts and thrusts, and Porumboiu directs their subtle feints and ripostes with a careful eye for the casual gains and losses inherent in such an unsatisfactory affair.

Unexpectedly absorbing as it is though, the movie does a visual aesthetic that could be off-putting to certain viewers. Porumboiu’s adoption of rigid camerawork and single shot set ups, while keeping things at a distance, actually works to force the audience to pay attention to what’s being said, and the way in which Paul and Alina move around each other, as if in a dance, reaps its own dividends. Particularly effective are the neutral backgrounds Porumboiu places his characters in front of, their non-committal colours and broad expanses reflecting the disinterest Alina and Paul really have in each other. It’s only when Paul and Magda run into each other in the hotel lobby that the environment changes, becoming more decorous and richly detailed. It’s a refreshing change for the viewer, but as Alina leaves them to it and Magda displays her anger, it becomes an indication that Paul’s personality needs an impersonal surrounding in order for him to feel comfortable, and to have a degree of control that reassures him (under Magda’s withering gaze Paul reacts like a chided schoolboy).

Rating: 8/10 – surprisingly emotional beneath its stringent visuals, Where the Evening Falls on Bucharest or Metabolism is deceptively simple and subtly rewarding; less a meditation on the nature of movie making (though with nods in that direction), and more an examination of two people using each other out of convenience, Porumboiu’s movie is an unexpected pleasure.