In Vengeance: A Love Story, Cage is Detective John Dromoor, a veteran Niagara Falls-based cop who meets a young woman, Teena (Hutchison), in a bar and takes a paternal liking to her. Teena is separated from her husband and has a young daughter, Bethie (Bateman). On their way home from a party at her husband’s, Teena and Bethie run into four men who proceed to drag them both into a nearby boathouse with the intention of raping Teena and, possibly, Bethie as well. Though Bethie manages to hide from them, it doesn’t stop her from being a witness to her mother being raped. The men leave Teena for dead, while Bethie comes out of hiding and gets help.

Dromoor is assigned to the case, but doesn’t recognise Teena when he arrives at the scene. But later, when her identity is revealed, Dromoor takes it upon himself to ensure that the four men are arrested and put in prison. Fate, however, has other plans: two of the men are brothers, and their mother (Tilton), protesting their innocence, hires a lawyer, Jay Kirkpatrick (Johnson), with a reputation for keeping violent criminals out of jail. When the trial begins and it begins to look as if Kirkpatrick’s winning streak will continue, Dromoor decides that, for justice to be truly served, he must go after the four men, and ensure they are punished.

Adapted from the novel, Rape: A Love Story by Joyce Carol Oates, the more commercially titled Vengeance: A Love Story sees Cage coast along in the role of Detective Dromoor, and look throughout as if the anti-depressants aren’t working. Maybe Cage is attempting to internalise his feelings but it’s hard to tell, as his expression rarely changes and he’s given the kind of dialogue that makes him sound like he’s half asleep. It’s also the kind of performance that could best be described as disconnected. Even when Dromoor’s playing judge, jury and executioner Cage still looks as if he wishes he were somewhere else.

For a while, Cage was set to direct, but scheduling conflicts saw him hand over the reins to Martin. As a director, Martin is a great stunt coordinator (his primary role within movies), and his previous experience has been in directing low budget horror movies. As a result, Vengeance: A Love Story, is a leaden effort that eschews any subtleties that might have been a part of the source material in favour of a by-the-numbers approach. It’s also tension-free, features a performance from Johnson that seems to be taking place in a vacuum, and makes its villains the kind of grinning idiots that should have gone out of movie fashion in the Eighties. All in all, it’s dispiriting stuff that reinforces the notion that, these days, Cage will commit to anything for a pay cheque.

Rating: 3/10 – not even an attempt at creating the moody, stifling atmosphere of a modern noir can help Vengeance: A Love Story gain any dramatic traction; a poorly realised adaptation of Oates’ novel and a blunt exercise in emotional distress, it’s a movie that’s best forgotten as soon as you’ve seen it.

In Arsenal, Cage is Eddie King, a low-life Southern mobster who snorts a lot of cocaine and gets involved with the lives of two brothers, JP (Grenier) and Mikey (Schaech). As kids, Mikey was always the one ot watch out for his younger brother, JP, but as adults the tables have turned. Mikey has been in trouble with the law, while JP has built up a local construction company; he’s also married with a young daughter. Mikey takes a loan of $10,000 from JP to help him start again, but Mikey’s idea is to use the money to buy cocaine and re-sell it at a profit. But Mikey’s home is raided, and the cocaine is stolen from him. He tracks down the two men who stole it, but is unable to get it back. Soon after, a chance encounter with Eddie King leads to Mikey being kidnapped by King and held to ransom.

Despite being told not to involve the police, JP enlists the help of old friend and local cop, Sal (Cusack). Between them the pair discover that King is the kidnapper they’re dealing with, though they have no immediate way of managing the situation other than to pay the ransom of $350,000. While JP gets the money together, Mikey makes an unsuccessful escape attempt, old alliances are put to the test, Eddie deals with some awkward family ties, and a clue leads to the location where Mikey is being held. Determined not to let his brother be killed, JP comes up with a plan to save Mikey and stop King once and for all. 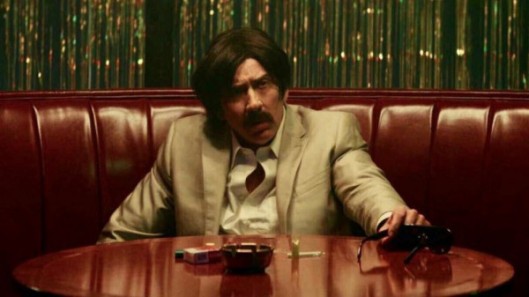 As opposed to his almost invisible performance in Vengeance: A Love Story, here Cage aims for the opposite end of the spectrum and gives his most over-the-top performance since Bad Lieutenant (2009). With an ill-fitting (and frankly ridiculous looking) wig, bulbous nose, and semi-laughable moustache (that’s rarely in the same place twice), Cage goes full throttle in his efforts to make his character appear dangerous and/or psychotic. He may have aimed for bravura at first, but it isn’t long before he’s shouting his lines at high volume and appearing to be on the verge of having a stroke. It’s a one-note performance that makes Eddie look and sound like the ultimate spoilt child, and in terms of the movie, it undermines his role as the central villain.

However, against the likes of Grenier and Schaech (who are supposed to be brothers, but who don’t look or sound alike, and have little on-screen chemistry together), Cage at least is making an effort. Grenier looks confused a lot, as if the rest of the cast is working from a script he hasn’t seen, while Schaech tries for muscle-bound yet deep-down sensitive and only succeeds in looking like he’s unsure of what’s being asked of him as an actor. Cusack wanders in and out of the narrative, mutters a few lines each time, then disappears until the next time the script needs him to tell Grenier just how bad things are getting. The movie lacks a sense of urgency once Mikey is kidnapped, its action scenes are perfunctory, and an extended prologue goes to great lengths to show the deep, caring relationship between JP and Mikey when a short dialogue scene could have done it in half the time. All in all, it’s dispiriting stuff that reinforces the notion that, these days, Cage will commit to anything for a pay cheque.

Rating: 3/10 – predictable on every level, Arsenal is a dull excuse for an action thriller, and directed in a manner that suggests Miller knew there was little chance of a decent movie emerging from out of the banal nature of Jason Mosberg’s screenplay; Cusack, wearing a bandanna and shuffling around a lot, seems to be acknowledging a debt to Steven Seagal, while any fun to be had is in seeing how many times the movie can set up a promising scene only for it to turn out to be just as bad as the rest.