Three years after saving hundreds of lives in the tsunami disaster that struck his home town of Geiranger, geologist Kristian Elkjord (Joner) is separated from his wife and family. While he still lives in Geiranger, they have moved to the capital, Oslo. The death of a colleague, Konrad (Frisch), in what is regarded as a rare seismic shift while working in a road tunnel, prompts Kristian to investigate further. Making contact with his former boss, Johannes (Amdam), Kristian’s suspicions that the seismic shift that killed Konrad could be an indicator of a bigger problem to come, is refuted. But when Kristian discovers that Konrad has been researching the possibility of another devastating earthquake similar to the one that struck Oslo in 1904, his suspicions appear to be well founded. With the help of Konrad’s daughter, Marit (Johansen), Kristian does his best to alert his family – wife Idun (Torp), teenage son Sondre (Oftebro), and young daughter Julia (Haagenrud-Sande) – but with all three of them in various parts of the city, getting to them in time and keeping them safe becomes even more perilous when Kristian’s fears become reality… 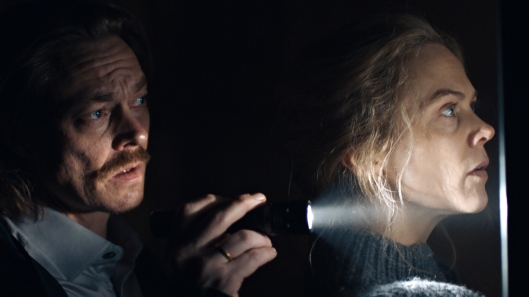 An unexpected but welcome sequel to The Wave (2015), The Quake is pretty much the same movie but on a grander, more devastating scale. There’s the usual long build up before the titular disaster happens, and there are the usual scenes where the hero tries to convince everyone around him that he’s not crazy or alarmist or both, and there are the standard, minor precursors to the main event to help build up the tension. It’s formulaic, and for the most part entirely predictable, but thanks to an astute script – courtesy of returning writers John Kåre Raake and Harald Rosenløw-Eeg – and Andersen’s confident handling of the material, this is that rare sequel that is as as good as the original. Having the same cast back to play the Elkjord family helps too, and the decision to have Kristian estranged from them due to his suffering from debilitating survivor’s guilt, gives many of the movie’s earliest scenes more of an emotional impact. So much so, that when it comes time for Kristian to take on the mantle of rescuer, the increasing peril everyone finds themselves in is all the more effective for the viewer in that there’s no guarantee they’ll all survive.

As with the scenario in The Wave, Raake and Rosenløw-Eeg have taken a real event in Norway’s history – the 1904 earthquake referred to hit 5.4 on the Richter Scale – and then explored the current research which advocates the strong possibility of another earthquake on the same scale happening at some unguessable point in the future. This plausibility adds to the credibility of the movie, and makes the actual earthquake depicted feel as if it could actually happen (there’s a restraint too in the amount of devastation that’s caused that also feels right). Joner and Torp reprise their roles with the same integrity and commitment they brought to The Wave, and there’s strong support from the rest of the cast, though Amdam is stuck playing the kind of blinkered character you hope will end up being taken out by a collapsing building. The cinematography is suitably bleak with a subdued colour palette and often gloomy lighting, but this is in keeping with the pessimistic nature of the material. The special effects are impressive without going over the top, and the various obstacles and problems that Kristian has to overcome to keep his family safe are well crafted and well thought out. The last thirty minutes are as tense and as nerve-wracking as anything else you’re likely to see in the disaster movie genre this year, but it does make you wonder, what next for the unfortunate Elkjords?

Rating: 8/10 – with a slow start that concentrates on its characters and promoting the inevitable danger they’ll face later on, The Quake offers a number of edge-of-the-seat moments in amongst all the mayhem, and it does so with a great deal of shrewdness and self-assurance; with a surfeit of suspense, and a handful of visceral shocks, this is an object lesson to how to make a disaster movie feel realistic, and how not to lose sight of the characters once it all goes spectacularly wrong.