Arriving three years after its title character’s debut, Machete Kills opens with Machete (Trejo) and Agent Sartana (Alba) intercepting a weapons deal between US soldiers and members of a Mexican drugs cartel.  When their plan goes awry and Sartana is killed, Machete finds himself approached by President Rathcock (Sheen) to return to Mexico and find and, if necessary kill, cartel boss Mendez (Bichir).  Mendez is threatening to launch a nuclear missile on Washington D.C.; if Machete stops him, all of Machete’s past sins will be forgotten and he will be granted immediate US citizenship.

In Mexico, Machete finds himself captured by Mendez, who reveals he’s being backed by a mystery American who’s provided him with the missile.  This turns out to be Voz (Gibson).  Machete escapes with Mendez in tow and they head for the border but not before Mendez has put out a bounty on both their heads to the tune of $20 million.  With pretty much all of Mexico after them – plus face-changing super assassin La Chameleon (Goggins, Gooding Jr, Gaga, Banderas) – and the added problem of keeping Mendez alive (his heartbeat is connected to the missile’s arming device; if he dies the missile will fire), Machete has to get Mendez over the border and to Voz’s hideout in order to stop the missile from being fired.  Voz, though, proves to be a megalomaniac who can see the future (oh, and he’s also built an “ark” in space – once the world is destroyed by the nuclear missiles he’s got primed to be launched, and the dust has cleared, he and his followers will return to Earth and start a new, better society; there, got all that?)  With the help of old friend Luz (Rodriguez), Machete attacks Voz’s HQ just as he’s having his launch party.  Will Machete save the day?  Will Voz’s evil plan be thwarted?  Will there be a higher death toll than most Arnold Schwarzenegger movies from the Eighties?  (If you’ve answered yes to all three, then give yourself a pat on the back.) 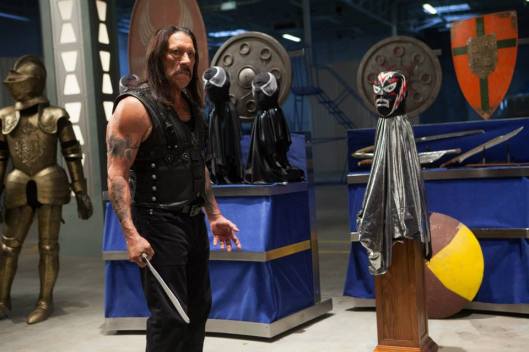 As deliberately and casually over the top as its predecessor, Machete Kills is a riotous mix of primary colours, ear-crunching sound effects, limb-slicing violence, boys-with-toys style hardware, visceral humour, cheesy dialogue, unsubtle in-jokes, scantily clad gun-toting females, and the repository of Mel Gibson’s worst ever screen performance.  Rodriguez’s kitchen sink approach to the material works well over all, and he certainly wins points for inventiveness, but after ninety minutes the lack of subtlety begins to wear very thin indeed.  Fortunately he’s helped out by a committed cast who all seem to relish the chance to kick back and go with the absurdity of it all.  Except for Gibson, who plays Voz as if he were a villain in a Bond movie: all urbane chat and modish amusement.  He’s about as convincing as cottage cheese on steak.  That said, Trejo is still an awkward watch, his acting chops as wayward as a leaf in the wind, but it’s all about his physical presence, and Rodriguez uses him cleverly throughout, making Machete almost a force of nature.

For fans of the character, Machete Kills will reinforce their love for the character, though newcomers may wonder what all the fuss is about.  Some of the early scenes lack pace, and Rodriguez stops one too many times to introduce new characters or reintroduce old ones.  The action scenes are fun on an arcade game level, and give rise to all manner of violent, gory deaths (if I mention the words “intestines” and “helicopter blades” you might get an idea of how inventive Rodriguez is in this department).  Pretty much every woman in the movie is required to wear figure hugging and/or flesh-revealing clothing, including Lady Gaga (unfortunately, it doesn’t work for her as much as it does for, say, Sofia Vergara); sexist it may be but it’s as nothing compared to the casual racism that runs like a disquieting undertone from beginning to end (is American citizenship really such a great prize for a Mexican?).  Of course, there is a degree of irony here too, but it’s not quite as prominent as, say, Vergara’s crotch gun.

Away from Trejo and Gibson, the performances are much better, with Bichir a highlight as the schizophrenic Mendez: one moment a raging psychopath who thinks nothing of having his ward Cereza (Hudgens) killed as an example, the next a compassionate rebel determined to bring down the cartels.  Bichir switches between the two personalities with ease, often in the same line of dialogue, and his performance bolsters the movie every time he’s on screen.  Rodriguez, Alba and Savini reprise their roles from Machete, and of the four actors portraying La Chameleon, it’s Gooding Jr who impresses most.

At the beginning of the movie there’s a trailer for a forthcoming Machete feature, Machete Kills Again… In Space.  It appears to be a joke trailer but by the movie’s end it’s more of an accurate prediction of where Machete is heading next.  If and when that movie appears, let’s hope there’s a sharper script and less erratic direction.  With most, if not all, of Rodriguez’s movies there’s a feeling that he’s trying to bombard the audience with all sorts of diversions and trickery so that we don’t see the holes and the flaws in the plot or the storyline.  It’s evident here, and while Machete Kills is entertaining on a superficial level, the fact that there is no depth to it at all doesn’t help things.

Rating: 7/10 – a mixed bag (as usual) from Rodriguez with some stand-out moments and a firm sense of how ridiculous it all is; a popcorn movie for those who like their popcorn drenched in blood and free from logic.