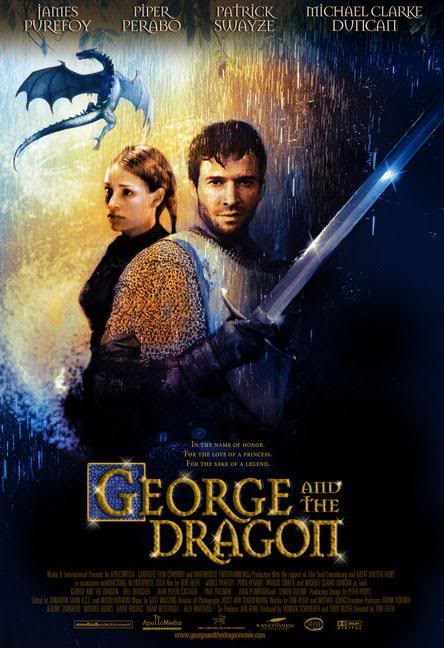 After fighting in the Holy Wars, knight George (Purefoy) returns home to seek a quiet life and settle down on a small parcel of land. To this end he seeks out King Edgar (Callow). But the King’s daughter, Princess Luna (Perabo) has been abducted, and in return for the land he wishes, George agrees to help search for the Princess alongside her betrothed, Garth (Swayze). While the rescue party, accompanied by faithful retainer Elmendorf (Treacher) and adventure-seeking youngster Wryn (Weeks), look for the Picts they suspect have taken Luna, the truth is far stranger. Luna is actually holed up in a cave looking after a dragon’s egg, having been abducted by the mother (who she calls Adelaide for some reason). Luna is determined that the egg will hatch and when she is rescued by George, she thwarts his repeated attempts to destroy it. An uneasy alliance is formed between them as George agrees to help Luna get the egg out of harm’s way long enough for the baby dragon (who she calls Smite for some reason) to hatch. As they travel they must contend with the machinations of Garth, several bands of Picts, and an approaching band of mercenaries led by the dastardly El Cabillo (an uncredited Val Kilmer) who have heard there is a reward for the Princess’s safe return. Cue sword fights, chases, a comic priest (Castaldi), an easily swayed Mother Superior (Plowright), and a brief appearance by Bill Oddie as an innkeeper, not to mention an adequately rendered dragon and its offspring.

Despite being a Euro-pudding of a movie – Germany, the UK and Luxembourg were all involved in the movie’s production – George and the Dragon is a light-hearted romp that doesn’t take itself too seriously, has a surfeit of knowing performances (Purefoy has the movie’s measure completely), a winning line in obvious, hokey pantomime humour (watch out for the woman fixing her thatched roof when George arrives at the village where his father (Freeman) lives), and a convincing medieval feel courtesy of the (largely) Scottish locations. Enjoying themselves as much as Purefoy, the rest of the cast give their all, and the script by director Reeve and Michael Burks is geared to provide each character with enough screen time to shine in their own right, as well as entertain the audience.

There’s nothing new here, obviously, but it doesn’t matter. It’s a simple tale simply told but with enough verve and skill to offset its modest budget. Reeve, better known as a producer, keeps the various plot strands and storylines clearly outlined, and frees his cast to inject the kind of earnest frivolity this kind of movie thrives on. The photography by Joost van Starrenburg shows off Scotland and Luxembourg’s scenery to great effect, and the physical and special effects are integrated seamlessly (well, except for the shot of the dragons splashing about in a lake).

On the minus side, Perabo’s allowed too many modern day inflections and references in her performance, and Swayze looks ill throughout; his wig doesn’t help either. And that’s about it. Nitpickers may find other things to complain about but that would be doing the movie a major disservice. It’s not the best movie ever made but George and the Dragon is fun, entertaining, and a more than pleasant way to spend ninety minutes.

Rating: 7/10 – an entirely enjoyable surprise of a movie that’s much better than it looks; for once, a “guilty pleasure” you can tell all your friends about.