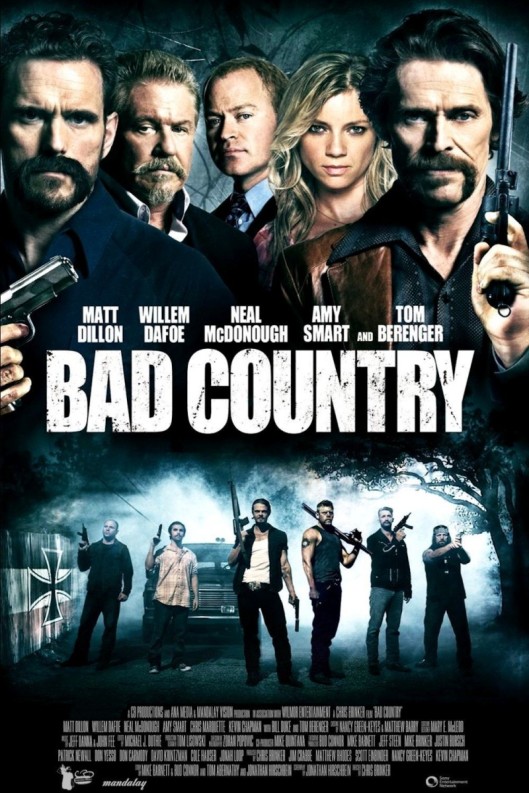 At times, Bad Country seems like an Eighties throwback, a Walking Tall-type movie that swaps Tennessee for Louisiana, and Buford Pusser for Willem Dafoe’s detective Bud Carter.  Its production design and filming style is reminiscent of other movies from that era, and while that’s no bad thing by itself, this grounding doesn’t add anything to the movie, or make it stand out.

With an opening statement that gives the impression the movie is based on a true story (but it’s not), Bad Country sees Carter bust a small-time gang of thieves.  Their arrest leads him to Jesse Weiland (Dillon).  Weiland is a safecracker-cum-enforcer for local syndicate kingpin Lutin Adams (Berenger); he also has a wife, Lynn (Smart) and baby son.  Adams is in Carter’s sights and he turns Jesse, aided by Jesse’s animosity towards Adams for having his brother killed, and his need to provide for Lynn and the baby (which will be difficult if he ends up in jail).  With the Feds, represented by rookie Fitch (Marquette), muscling in on Carter’s operation, the original plan is hijacked and things quickly go sour, with further loss of life on both sides.  When an attempt is made on Weiland’s life, he goes after Adams himself.

There’s little that’s fresh or new here, and the movie trundles along in fits and starts and never really springs to life.  The plot is perfunctory and often banal, while Chris Brinker’s direction is drab and uninvolving.  The cast do their best – Dafoe gives his usual impassioned performance, despite the material – but Smart and McDonough are given short shrift, while Dillon often seems on auto-pilot.  The Baton Rouge locations are well-used but not enough to make them a feature, and there’s one too many scenes that fade to black, as if those scenes should have continued a bit longer but the script didn’t know how to manage it.  There’s plenty of gunfire, and a final shootout that lacks energy and focus when it should be thrilling.

Rating: 5/10 – more ho-hum than humdinger, Bad Country plods along without ever really getting going; set against other, more recent crime thrillers, it lacks more than most, and the Eighties setting ends up being of no benefit at all.