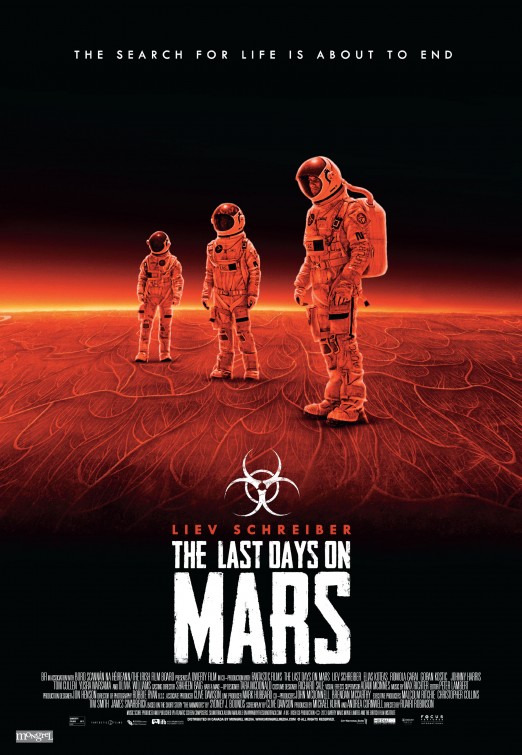 With less than twenty hours to go before their time on Mars is to end, a team of scientists winding up their six month stay as part of the Aurora 2 mission are thrown into peril when one of the team, Marko Petrovic (Kostic), with colleague Richard Harrington (Cullen), goes to check on a broken sensor rather than attend a last briefing. Marko has an ulterior motive for going, one that the rest of the team find out about while he journeys away from their command centre. It appears there is life on Mars, at a microbial level, but just as Marko discovers this the ground beneath him gives way and he plunges into a cavern. Harrington is unable to save or rescue him, but he does notify the rest of the team. Headed by senior officer Charles Brunel (Koteas), a rescue team consisting of Brunel, systems specialist Vincent Campbell (Schreiber), and scientist Kim Aldrich (Williams) attempts to rescue Marko’s body, and discover the whereabouts of medic Lauren Dalby (Warsama) who was left to watch over the site while rescue apparatus was obtained from the command centre.

However, Marko’s body and Dalby have disappeared, but Campbell sees the microbial organism (though he can’t describe it properly). As the rescue team heads back, two figures appear on the scanners, heading for the command centre. Harrington lets the first of them in, and it proves to be Marko… or at least, what remains of Marko. Affected by the microbial organism, Marko attacks Harrington and the remainder of the team before being joined by an equally altered Dalby. The rescue team returns and they and the rest of the (unaffected) crew trap Marko and Dalby in part of the command centre, but not before Brunel has been badly wounded. With their communications to Aurora base compromised, Campbell tries to reboot the system, but has to do so by himself, leaving the rest of the team to fend off Marko and Dalby’s attempts to get to them. When things go from bad to worse, Campbell, and scientists Rebecca Lane (Garai) and Robert Irwin (Harris), head for the Aurora rendezvous point in the hope that they can alert Aurora base and stop any of the infected team from being picked up. 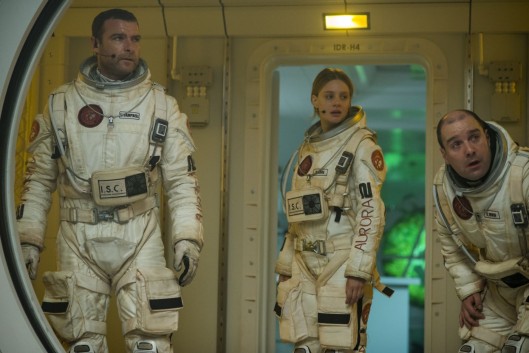 With Jordan standing in for Mars, the movie’s exteriors look suitably other-worldly, and the Martian Rovers the team uses to get around in are quite impressive, leaving the look and feel of the movie well-grounded and believable. For a relatively low-budget production, this UK/Irish co-production looks ten times better than it should – hats off to production designer Jon Henson – and the special effects are uniformly excellent.

But – and yes, this is a very predictable ‘but’ – the storyline doesn’t match the quality of the look of the movie. Adapted from the short story, The Animators, by Sydney J. Bounds, Clive Dawson’s script has its scientific team behave in ways that make you want to slap your forehead and cry, Really? From Marko’s initial lying about going to check on the sensor, to Harrington’s letting Marko in without any attempt at decontamination (shown quite clearly as protocol before then), to Irwin’s sudden decision to betray a teammate, while these things obviously advance the storyline, they make a nonsense of these people being (hopefully) highly trained and motivated, not to mention well chosen for the mission. And none of them spot that the microbial organism craves water – though why it should turn the crew into homicidal maniacs is another question entirely – and none of them think to arm themselves at any time despite the obvious threat.

There’s also some scientific anomalies that rankle as well, like the EVA suits that have a limitless supply of oxygen, and the likelihood of the microbial organism behaving as if it has a hive mind. There’s an attempt to kill it using antibiotics but this serves only to highlight the resemblances to both The Thing (1982) – testing the antibiotics on a restrained Brunel – and Alien (1979) – the last remaining threat to Campbell’s escape from Mars being expelled from an airlock. These moments only add to the disappointment that accrues as the movie progresses, and while Robinson maintains a good pace throughout and keeps a firm hand on proceedings, the movie often stumbles with the weight of its contrivances. The cast do their best – Schreiber and Koteas put in their usual committed performances – but are hampered by having to behave in such unconvincing ways.

Rating: 5/10 – hamstrung by playing to too many stock situations and character development, The Last Days on Mars starts off well but goes downhill quicker than Marko down a crater; great visuals compensate for the poor plot and storyline, but there’s still the small fact that the movie should more accurately be called The Last Hours on Mars.