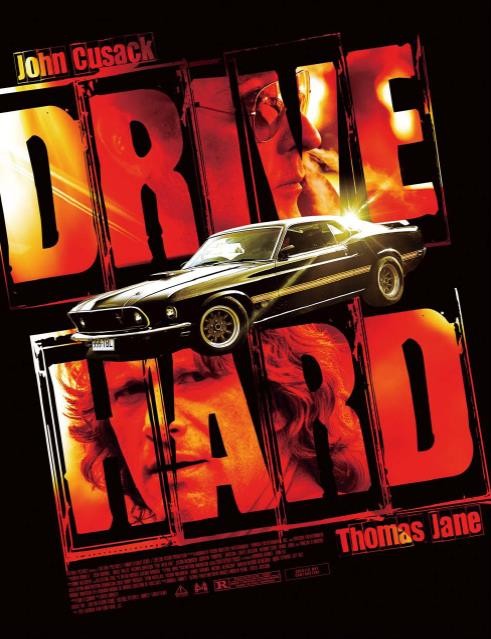 Former race car driver Peter Roberts (Jane) runs a driving school but continues to dream of race car glory.  His wife, Tessa (Spence) and daughter Rebecca are not entirely supportive of him, and he’s very much stuck in a rut.  When a driving lesson with visiting American, Keller (Cusack) begins uncomfortably – Keller seems to know an awful lot about Peter, his family, and his past – Peter decides to end the lesson.  Keller persuades him to make a stop at a bank; when Keller comes out it’s clear he’s just committed a robbery, and Peter is now his getaway driver.  They evade the police and swap Peter’s clunky driving school car for a souped-up GT before heading further up the coast to where Keller can leave the country.

Of course, Keller hasn’t just committed any old bank robbery, he’s stolen $9 million in bearer bonds from a bank that acts as a front for the crime syndicate that left him high and dry after a job he did for them (Keller is a thief and spent five years in jail).  With the bank’s “security” staff after them, as well as the local police (who are on the bank’s payroll), and the Federal police, Peter and Keller have to try and keep a low profile on their journey, something that proves easier said than done.  And as their relationship develops, Keller shows Peter that his life isn’t as rosy as he thinks it is.  It all leads to a showdown at a marina that sees Peter and Keller working together to get both of them out of danger. 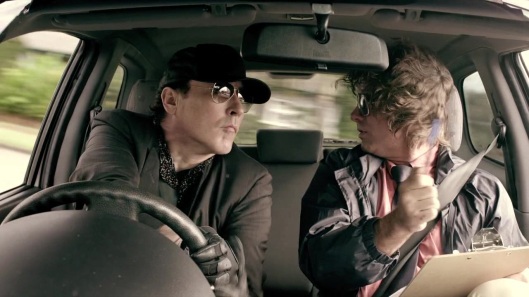 Drive Hard is best summed up in four words: it’s just plain awful.  This is movie-making of such depressing witlessness that it makes you wonder how on earth anyone could have thought they were doing a good enough job in the first place.  Watching actors of the calibre of Cusack and Jane trying to make any of it interesting or entertaining is like watching two ageing boxers trying to land punches but missing every time.  Jane is simply embarrassing; it’s like he’s decided that making his character seem credible just isn’t relevant or necessary.  It’s possibly the worst performance he’s ever given on screen.  And Cusack is only marginally better, again ditching a credible characterisation in favour of mangled line readings.  If there was ever a performance that shouted, “paying the mortgage here!” then this is the one.

At the reins, and failing to bring anything remotely interesting or new to proceedings is veteran director (and co-screenwriter) Trenchard-Smith, a cult figure quite well-regarded but on this outing, clearly going through the motions.  For a movie with a title like Drive Hard, it’s equally clear that the title came first, and the story and plot came along a very distant second and third.  Even the chase sequences – strictly speaking, one chase sequence split into two sections – are dull and uninspired, and you know things are bad when the budget isn’t big enough to come up with at least one decent collision or car wreck.  Otherwise there are plenty of shots of Peter and Keller driving through the (admittedly) beautiful Gold Coast countryside on their not very fast trip to the marina, and an encounter with a group of bikers that should provide some much-needed tension but which is resolved with a minimum of fuss and/or bother (basically these bikers are about as scary as a bunch of leather-clad Teletubbies).

There are other encounters along the way – a gas station attendant tries to steal the bonds but ends up like Marvin in Pulp Fiction (1994), an elderly woman at the site of a wedding reception goes gun crazy when she realises who Peter and Keller are – but these (very minor) highlights are still badly paced and edited.  The subplot involving the corrupt cops and the Feds is allowed to trundle on in such a contrived manner it makes its resolution all the more welcome, even if it is entirely implausible, and the main bad guy, Rossi (Morris) is so colourless he might as well be see-through.  Peter’s relationship with Tessa feels like it was adapted from an agony aunt column, and the solution to their problems proves to be unashamedly sexist.

The worst aspect of this absolute mess of a movie is without doubt the dialogue, with enough clunkers per minute to warrant some kind of award.  Cusack seems saddled with most of them, and his attempts to justify his actions are both lame and ludicrous at the same time.  Jane blusters his way through his lines with all the enthusiasm of someone who can’t wait to get them over and done with, and Rossi’s attempts to sound threatening are about as impressive as someone trying to intimidate a snail.  And as if things couldn’t get any worse, the end credits fail to list the young actress who plays Rebecca, but does list Cusack’s personal chef twice.

Rating: 3/10 – abysmal, and a low point for pretty much everyone concerned, Drive Hard disappoints on almost every level; leaden, tension-free and careless, this is filmmaking for the sake of it and as entertaining as watching your toenails grow.