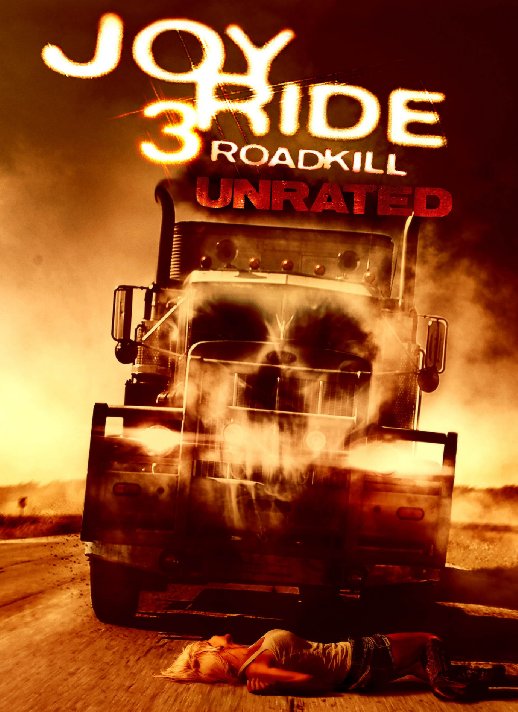 When a couple (Mitich, Brown) decide to lure someone to their motel room so they can rob them, they put a call out to any nearby truckers who might be listening on their CB radios.  What they don’t bank on is psycho trucker Rusty Nail (Kirzinger) answering their call.  Easily overpowering them, they find themselves chained to the axle of his rig and clinging to the bonnet; if they manage to stay on for a mile, not only will Rusty set them free, they’ll also be okay for coke.  Of course, Rusty has a trick up his sleeve, and the couple die.  When their bodies are discovered, the police put it down to some kind of animal attack, but newbie Officer Williams (Armstrong) isn’t so sure, especially when another officer talks about that particular stretch of highway being called Slaughter Alley, and the high number of deaths and disappearances that have taken place there over the years.

The movie switches focus then to a group of race car enthusiasts planning to take part in Canada’s Road Rally 1000.  Jordan (Hutch) is the lead driver, Mickey (Hollingsworth), the mechanic, Austin (Venuta) the owner of the race car and second driver, Bobby (Manley), Mickey’s assistant, while Austin and Mickey’s girlfriends, Jewel (Prout) and Alisa (Savasta) are also along for the ride.  Realising that by taking Route 17 – the aforementioned Slaughter Alley – will shave a day off their travelling time, the group take the road more dangerous, and even after they receive a warning from resident truck stop looney Barry (Ferry).  While Austin is driving the race car, he overtakes a truck, causing stones to fly up and hit the front of the vehicle.  The truck is Rusty Nail’s and he proceeds to chase them; they elude him however, and continue on to the border.

It’s not long, though, before Rusty catches up with them, and one by one the group fall foul of the angry trucker’s desire for revenge.  As the death toll rises, it’s left to the remaining two people in the group to face Rusty in a showdown at a scrap yard.

Following on from Joy Ride 2: Dead Ahead (2008), this latest instalment in the franchise is yet another excuse for gory killings and the liberal spraying of blood and grue.  Brought in to breathe new life into what wasn’t exactly a failing series of movies – do two movies constitute a series? – writer/director O’Brien brings the overwrought bag of tricks he used to successfully exterminate any fun to be had with the Wrong Turn franchise, and uses it to create a movie that resonates more as an offshoot of the Saw movies than as another chapter in the saga of everyone’s favourite road-based psycho (outside of the one in Duel (1971) that is).

With O’Brien behind the wheel (apologies for the pun), anyone who has seen Wrong Turn 5 (2012) will know that characterisation, consistency, credibility and creativity will all be abandoned in favour of Nail doing what he does best: maiming, torturing and killing various poor unfortunates; or basically, anyone who pisses him off (which it seems is just about everybody).  While the set piece killings are this movie’s entire raison d’être, it’s still a shame that the same amount of effort can’t go into developing some characters we can actually care about.  Not one character in the entire movie is worthy of our sympathy or regard, and so, all the viewer can do is struggle through the dreary scenes that pad out the movie between killings.  As each death occurs, it’s almost with a sense of relief that there’s one less individual each time who won’t be around to spout the inconsequential dialogue that O’Brien serves up as either gratuitous exposition or wretched conversation.

It all adds up to poor performances all round, with Hutch and Prout proving more difficult to watch than their co-stars, both actors seemingly unable to pitch an emotion in such a way that the audience will recognise it.  Kirzinger provides the series’ first physical incarnation of Rusty Nail, though O’Brien focuses more on his boots than his mostly obscured features, and “gifts” the stuntman-turned-actor with the kind of quip-filled dialogue that Robert Englund would have rejected/struggled with in his Freddy Krueger days.  That said, Kirzinger is an imposing figure, and is quietly menacing, which does add to the required effect.  Sadly, though, it’s not enough to save Joy Ride 3 from being as derivative and difficult to relate to as any other horror movie sequel.  The killings are as well-staged as you might expect (and certainly not shy about spreading as much gore around as possible), but Michael Marshall’s photography is serviceable and not particularly attention-grabbing.  There’s also some dubious editing, courtesy of Michael Trent, that cripples any tension that might have helped the movie seem a little more accomplished, and a few attempts at humour that fall as flat as a burst tyre.

Rating: 4/10 – disposable and relentlessly disappointing, Joy Ride 3 proves an even worse addition to the franchise than its predecessor; gorehounds will probably enjoy it, but this is a horror movie that runs out of gas in the first five minutes.