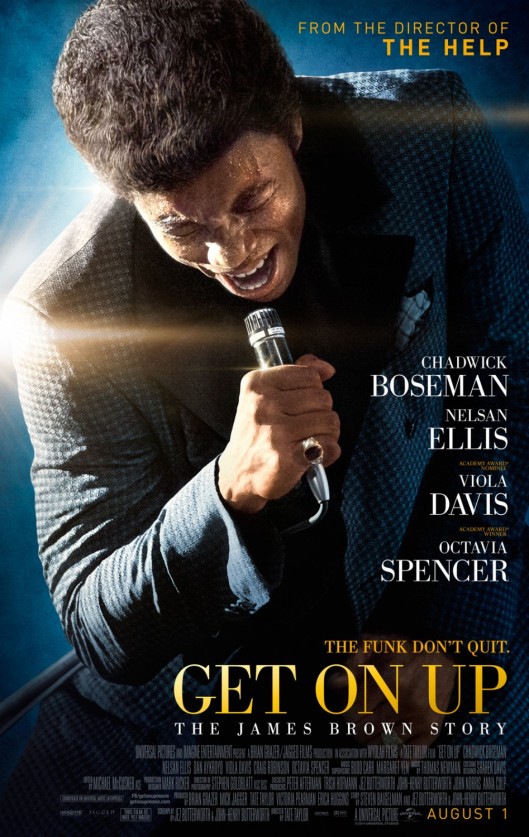 Get on Up recounts the life and career of James Brown (Boseman), but does so in a painfully non-linear way that sometimes makes it difficult to work out just when a scene is meant to be taking place; often it’s only Brown’s hairstyle that gives the viewer a clue. Opening with a scene set in 1988 where Brown accidentally fired a shotgun in a business property he owned and which lead to his arrest (shown much later in the movie), the script by Jez and John-Henry Butterworth skips back and forth in Brown’s life, from his abandonment by his mother (Davis) and then also his father (James), to his early start in the music business as part of the Famous Flames alongside Bobby Byrd (Ellis). With still further flashbacks and changes in direction, his rise to fame is examined, as well as the lengths he went to to maintain that fame.

What arises from all this is the notion that Brown was an intensely driven man who expected unwavering loyalty from the people around him, and whose talent hid an angry narcissism. He regularly treats people with disdain, particularly supposed best friend Byrd, and seems only to have had a “relationship of equals” with his manager, Ben Bart (Ackroyd), while preferring to be called Mr Brown rather than James by everyone else. It’s a trait that’s returned to again and again throughout the movie, and seems to be the only aspect of Brown’s character and personality that Get on Up is concerned about. And with the continual chopping and changing of the narrative, we learn little else about the man, or what motivates him; this has the effect of leaving the viewer adrift for much of the running time, as the movie veers away from exploring his personality in greater depth or detail. 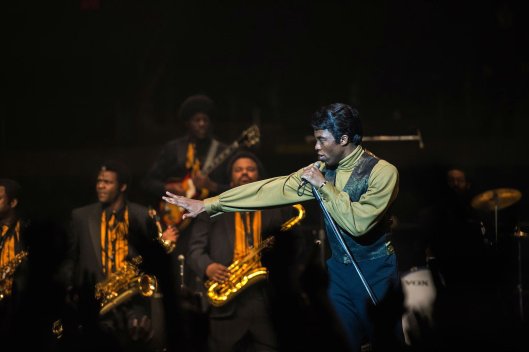 What does work, thankfully, is Boseman’s towering performance as Brown. The actor captures Brown’s sheer physicality and presence superbly, and although efforts to make him look like the singer in his later years don’t quite work, it’s still an amazing portrayal, fuelled by an energy that fizzes off the screen. On stage, recreating Brown’s movements, Boseman captures perfectly every crazy dance step and pirouette with ease. And he carries that intensity with him away from the stage or studio, giving as complete a performance as he can manage, even when the script isn’t completely supporting him. The same can be said for the likes of Davis, Ackroyd and Ellis, who all make more of their roles than you might expect.

Taylor focuses more on the musical numbers, recreating Brown’s live performances at every opportunity and using these sequences to inject some much needed zing into the movie, and to keep it from stalling. They are the best things in the movie, and the pace picks up every time one comes along. Otherwise, Taylor gives us a somewhat bland retelling of Brown’s life and one that, despite the lengthy running time, still feels rushed. The movie also has too many scenes lacking any resonance or connection to the other scenes around them (one moment of domestic abuse comes out of nowhere and feels included just for the sake of it). With this lack of focus, the movie proves only fitfully rewarding.

Rating: 6/10 – vibrant and alive when it “plays the hits!”, Get on Up falters when it tries to show Brown’s life away from the limelight; with Boseman’s astounding performance rescuing things time after time, it’s a movie that only does partial justice to the life and times of the self-proclaimed Godfather of Soul.