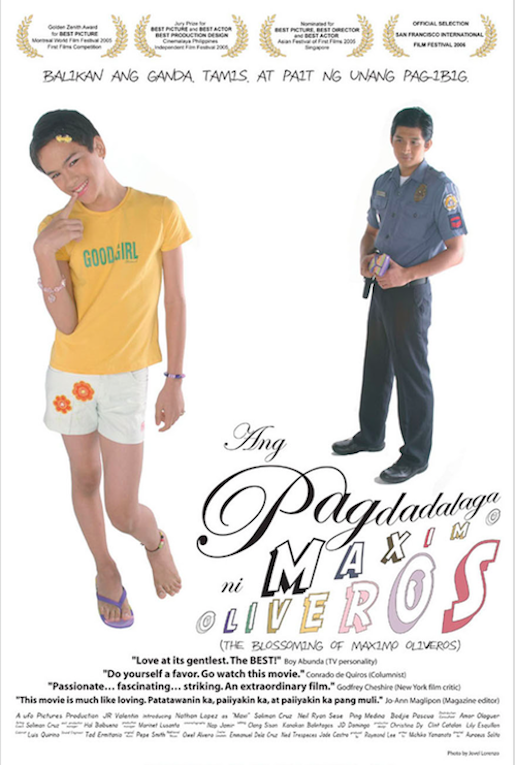 Twelve-year-old Maximo Oliveros (Lopez) lives with his father Paco (Cruz), and his two older brothers, Boy (Sese) and Bogs (Medina). In the absence of his mother who has passed away, Maximo cooks and cleans and generally takes care of everyone. But where his brothers and father are all tough, macho men, Maximo is the opposite: he’s effeminate, sashays when he walks, and he likes dressing up in women’s clothes and wearing make up. He has a few friends who have similar interests, and most of the time they watch romantic movies in a local DVD shop.

The arrival of a new police officer in the district, Victor Perez (Valentin), has Maximo wondering if what he’s seen in the movies could happen in real life. Despite the difference in their ages, Maximo develops a crush on Victor and determines to get to know him better. His attraction deepens when Victor interrupts two youths who assault Maximo and remove his clothes. Victor takes Maximo home, but earns Paco’s suspicion when he refuses to accept money as thanks. Later, the two youths are found naked and unconscious on a rubbish heap; one of them subsequently dies. At the same time, Maximo finds Boy cleaning blood from a T-shirt that belongs to Bogs.

With Victor proving to be a cop who doesn’t take bribes, Paco, who steals cell phones and sells them on, begins to become concerned over Maximo’s liking for him. Maximo cooks for him and begins to neglect his family. When Victor quizzes him over the murder of the youth, it leads to Paco, Boy and Bogs ambushing him one night and giving him a severe beating. Maximo finds him and taking him to Victor’s home, nurses him until he falls asleep. The next morning, Victor is hesitant towards Maximo, despite what he’s done, but they do share a wistful moment together that gives Maximo renewed hope that they will remain friends at least.

The arrival of a new police chief, Dominguez (Pascua), however, means promotion for Victor and a crackdown on local criminal activity. Maximo’s home is raided but the police don’t find anything. With Maximo still hoping that his relationship with Victor can be saved, Paco has other ideas: he decides he’s going to kill Victor, but when he confronts him, Paco comes face-to-face with an enemy from the past, an enemy as willing to step outside the law as Paco. 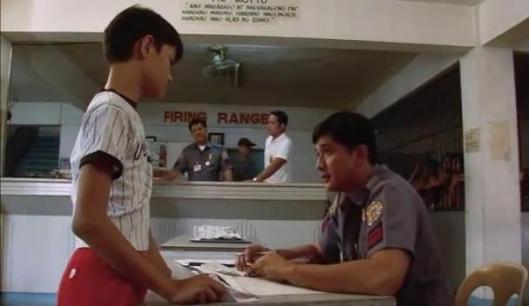 A movie that begins brightly, almost in a carefree manner before slowly darkening until tragedy is the order of the day, The Blossoming of Maximo Oliveros is a heartfelt, uplifting movie when it comes to Maximo’s lifestyle and subsequent infatuation with Victor, but plays it safe with its more dramatic, criminal elements.

When we first meet Maximo he’s on his way home and swinging his hips as if he’s parading along a catwalk rather than the grimy backstreets of Manila. He’s unashamed, confident, and more importantly, he’s not harassed in any way. In his local community, Maximo is well-known and much liked. His family treat him no differently than they would anyone else, and are openly affectionate toward him. In short, his obviously gay mannerisms and outlook aren’t a problem – until he meets Victor. The difference in age, the social divide created by Victor’s job and Paco’s “business”, the moral and spiritual implications (Victor is a practising Catholic), all conspire to keep Maximo and Victor apart, but it’s Maximo’s naïve yearning that gives him hope.

It’s Maximo’s continued hope in spite of everything that the script by Michiko Yamamoto plays with most effectively. It’s a delicate balancing act, but Yamamoto, aided by intuitive direction from Solito and razor-sharp performances from Lopez and Valentin, succeeds in adequately capturing the heady infatuation of first love alongside that love’s inevitable disintegration. It’s handled with a great deal of charm and discretion and scenes that might have bordered on being uncomfortable aren’t allowed to become so thanks to the script’s awareness of where the boundaries are. Even when Maximo gives Victor a peck on the cheek it’s done with an emphasis on the sweetness of the gesture rather than anything more sexual.

With the Maximo’s one-sided “romance” so confidently dealt with, it’s a pleasure to see the Oliveros’ family dynamic treated with equal confidence, their close-knit inter-dependence one of the movie’s many plusses. The tenderness shown toward Maximo by his father and brothers is heartwarming and sincere, and even though their criminal activities threaten all their futures, including Maximo’s, the movie’s message is clear: this family will do whatever it can to stay together. Played with artless integrity by Cruz, Sese and Medina, this is a nuclear family (sans the mother) that has learned the hard way that family matters above all else. So when Maximo begins to place Victor ahead of his family, the threat to that solidarity is all the more disconcerting for them; it’s no wonder Paco makes the choice he does.

But while the rest of the cast play their roles with a strong sense of authenticity and purpose – with the exception of Valentin who retains a hulking presence but little else – the movie remains a showcase for the remarkable talent shown by Lopez. Making his feature debut, Lopez inhabits the role of Maximo with so much assurance and poise that it doesn’t seem as if he’s acting at all. From his first appearance making that catwalk strut to the scene where Victor tests his loyalty to his brothers, to the final scene where he employs an altogether different walk from that first one, Lopez’s performance is never less than authoritative and genuine. He’s not fazed by the emotional requirements of the script and handles each development in the story with an ease you can imagine some other actors would kill for.

But while the movie has several strong components going for it, one of them isn’t the descent into turgid melodrama it takes in the final half hour, as notions of honour and revenge take a back seat to the carefully constructed storyline that’s gone before. With no other possible ending for Maximo and Victor’s relationship than the one that occurs, the movie was always likely to end quietly, but Yamamoto’s script turns its focus away from its main protagonist and leaves him on the sidelines while his future is decided on without him. Somehow, given Maximo’s intelligence and acceptance of the world he lives in, it seems a shame to marginalise him in this way. And a quick mention for the music, mostly guitar-based, but which is, at times, incredibly intrusive.

Rating: 8/10 – a compelling drama about the consequences of one young boy’s first love, The Blossoming of Maximo Oliveros makes no judgment about his love, but does tread a very fine line in displaying it; with a mesmerising performance from Lopez it’s genuinely affecting and rewarding.