Quinn (Helberg) is a florist who’s also a bit of a hypochondriac. He’s also in a long-term relationship with Devon (Lynskey), his high school sweetheart. Encouraged by his optometrist father Terry (Molina), he decides to ask Devon to marry him. But when he announces his intentions to his assistant, Kelsey (Grace), it prompts her to reveal her feelings for him.  Confused by this revelation, Quinn seeks advice from his best friend, Jameson (Quinto), but it all leads to Quinn having second thoughts about matrimony. Devon takes it badly and leaves him. Believing that he needs to explore other relationships, he starts seeing Kelsey, but her behaviour becomes distressing to him and he distances himself from her.

Quinn’s attempts to regain Devon’s trust and forgiveness but it all falls flat. She moves to Paris, and when Quinn finds out – and despite the continued attentions of Kelsey – he decides to pluck up the courage and follow her there in an effort to win her back. When he does he finds Devon has forged a friendship with a Frenchman called Guillaume (Moss-Bacharach), and is planning to spend some time with his family. Quinn follows her there but his visit is a disaster and prompts him to return to the US and put his relationship with Devon behind him. But he learns that it’s not all over… 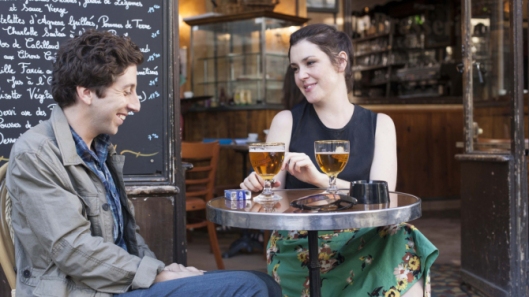 Best known for his role as Howard Wolowitz on The Big Bang Theory, Simon Helberg is to be congratulated for writing, co-directing and starring in a romantic comedy that a) sees him as an object of lust and b) has attracted a good cast. However, somewhere along the way, Simon Helberg the writer seriously undermined Simon Helberg the actor, and in doing so was in cahoots with Simon Helberg the co-director, for Quinn the character is one of the most irritating creations seen in recent years. Quinn is a nebbish, an ineffectual, stuttering idiot who isn’t so much easily led as emotionally vacant. His relationship with Devon is unconvincing – why would she love such a man when he’s so obviously gornisht helfn?

But even if Helberg the writer had given Helberg the actor a better role, he still would have let him down by failing to make his character funny or even halfway amusing. We’ll Never Have Paris is simply not funny – at all. Helberg’s script meanders from one poorly developed scene to the next, with spurious character motivations thrown in at random moments, and supposedly humorous situations allowed to peter out before they can achieve any relevance or resolution. Against this, Grace and Lynskey struggle to make anything of the material, with Lynskey particularly hamstrung by a role that requires her to be continually forgiving in the face of Quinn behaving (repeatedly) like an ass. Only Molina comes out of it all with any dignity intact, popping up at the beginning and again at the end in what is effectively a cameo role, his cheery demeanour and impish behaviour showing how it should be done.

Rating: 3/10 – dreadful, and lacking in anything remotely resembling dramatic or comedic acuity, We’ll Never Have Paris is sluggish, implausible stuff that is a struggle to sit through; Helberg isn’t the writer he thinks he is, and lets himself down too often for this to succeed, leaving the viewer with the feeling that they’ve sat through a movie that was filmed from a first draft.