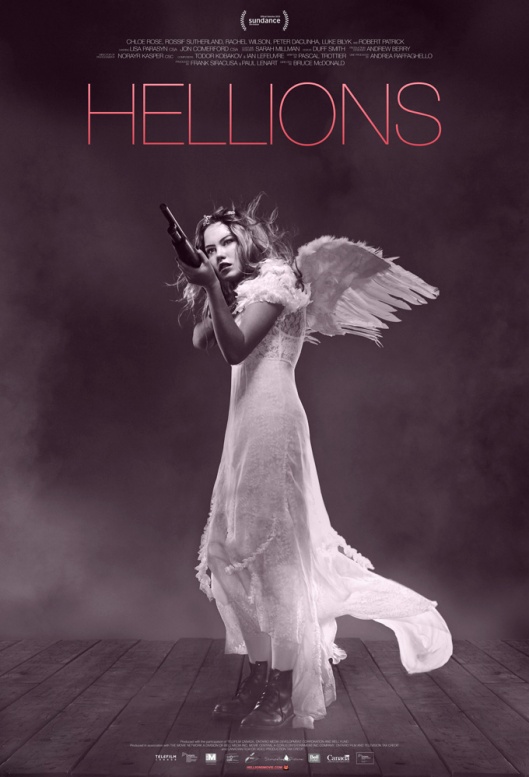 Dora Vogel (Rose), is a seventeen-year-old who lives with her mother, Kate (Wilson), and younger brother Remi (DaCunha). She has a boyfriend, Jace (Bilyk), who she’s intending to go to a Halloween dance with, but the news that she’s four weeks’ pregnant gives her pause. Afraid to tell her mother who has high hopes for her, Dora decides to stay at home and not go to the dance, but she doesn’t tell Jace. When her mother and brother go out trick or treating, Dora discovers that being home alone isn’t as comforting as she’d hoped, not least because of the oddly costumed child that calls at her door. Deciding she will go to the dance, she gets dressed up but now two children call, and this time one of them places their hand on her stomach leaving a bloody handprint. Shortly after, Dora begins to experience painful stomach cramps and calls her physician, Doctor Gabe Henry (Sutherland), to come over.

The cramps subside but when they do there’s a further knock at the door. Angry, Dora throws the remainder of the candy into the children’s sack – and sees something else there that shocks and petrifies her. She calls the police and while she’s on the line to the police dispatcher the house is seemingly possessed by a violent storm that sees various items hurled around by a powerful wind. The line goes dead and in time the storm subsides, but now Dora can see that there are more and more children outside, all wearing odd costumes. The arrival of an injured Doctor Henry sees the nature of what is now a siege intensify, and he and Dora lock themselves in the basement. But the children show tenancity and find their way in; Dora escapes through the laundry chute but the doctor isn’t so lucky. Dora tries to escape the house, and in the kitchen she comes face to face with one of the children. In her efforts to escape, Dora throws whatever comes to hand at the child, with no effect, until a salt shaker hits the child and the salt causes it to dissolve.

Now outside, Dora finds the sky transformed thanks to a bloody full moon that saturates everything in an eerie reddish-pink colour. She hides in an outhouse where the voice of one of the children speaks to her in her mind. It tells her they want her baby, the baby that is now growing at an advanced rate. Scared and horrified, Dora is found by Officer Corman (Patrick). They prepare to leave but hear Doctor Henry’s voice calling to them from the house. They go in, but Henry’s survival proves to be a cruel joke, but it’s one that allows Corman to realise what’s happening, and just how much danger Dora is in… 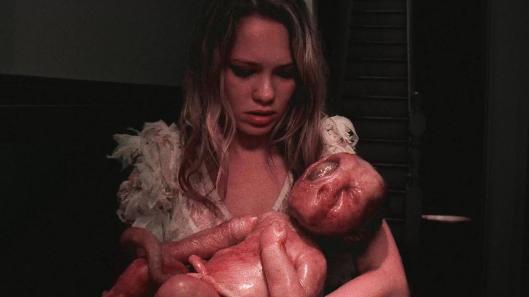 In 2008, Bruce McDonald gave us one of the most cleverly assembled zombie movies of the last ten years in the deliciously quirky Pontypool. Since then he’s laboured mostly in television, with the occasional feature thrown in (his last, The Husband (2013), is well worth checking out). Returing to the horror genre, McDonald has done his best to make a movie that combines a creepy, single-location setting with a broader supernatural raison d’etre (the children are demons looking to swell their ranks with Dora’s unborn child). In bringing Pascal Trottier’s script to life, however, McDonald is unable to overcome the deficiencies of the script, and as the movie breasts the hour mark and descends into fever dream territory, the tightness of the script up til that point drifts off into a soup of elliptical imagery and random occurrences that seem designed to pad out the remainder of the movie instead of bringing it to a satisfactory conclusion.

The set up is simple and effective, and the children – decked out in sackcloth hoods, unnerving masks, and surprisingly sinister metalware – are menacing, freakish and nightmarish to look at. Part of their effectiveness lies in their costumes, corrupted versions of children’s characters such as Raggedy Ann and Pinocchio; there’s nothing innocent about these kids, or what they want. McDonald highlights this horror at every opportunity, and even the kid wearing a tin bucket on his head (the leader, appropriately named Buckethead in the credits) is uncomfortably menacing. The children are the movie’s best asset, and whenever they appear the horror of Dora’s situation is more apparent and more terrifying.

What is less successful is the lame attempt to explain that this isn’t the first time they’ve done this, as Patrick’s dogged officer recalls the same thing happening to his wife, and the legacy of Carrie (1976) is resurrected in a superfluous final “scare” that fans of the genre will see coming a mile off. Elsewhere, Halloween is used as a backdrop for the supernatural shenanigans, but there’s no clear connection between the occasion and the children’s actions, and the field of exploding pumpkins is a triumph of unconvincing CGI. As a home invasion movie, Hellions is on firmer ground, and Rose’s performance is the glue that knits all the disparate elements together, from her shocked gaze at learning she’s pregnant, to her annoyance with the first child to knock (“Good luck with puberty”), to the moment when her realisation that salt can kill the children offers her a brief respite from being scared out of her wits.

Although the script’s unevenness hurts the movie overall, there’s more than enough to keep the viewer interested, even if it does go off the rails in the last twenty minutes. Dora is a sympathetic heroine, and it’s not hard to root for her, even if at one point she’s incapable of navigating her way through several hanging bedsheets. The various violent encounters are well handled, and the movie is refreshingly free of the post-modern irony and self-awareness that’s blighted so many horror movies in recent years. And the movie may be the first of its kind to make the colour pink seem ominous and sickly at the same time.

Rating: 6/10 – making a virtue of its restricted setting and an intelligent performance from Rose, Hellions is an above average horror/thriller that features some truly scary demon children and intuitive direction from McDonald; spoiled by a dilution of the threat towards the end, and a lack of focus the longer it goes on, it’s still a movie worth catching up with, and another example of what its director can do on a limited budget.