Already the highest grossing Chinese movie ever at the international box office – over half a billion dollars and counting – Stephen Chow’s Mermaid is a sweet-natured fantasy, with strong romantic overtones, and enough comic moments to make it one of the funniest movies of the year. It’s a movie that deserves its success, and despite a limited release in the US and most other territories back in February, should be seen by as many people as possible.

It’s a movie with an environmental message as well. Beginning with scenes that could put off some viewers, especially those who love animals, Chow’s latest sees playboy industrialist and developer Liu Xuan (Deng) acquire a wildlife reserve called Green Gulf with a view to using the area as a sea reclamation project. In partnership with Ruolan (Zhang Yuqi), Liu Xuan plans to use sonar devices to scare off the marine wildlife and use the project to make even more obscene amounts of money than he’s already got. What he doesn’t realise is that his plan will affect not only the local marine wildlife, but has already affected a group of mermaids (and an octopus) that live in the bowels of a shipwrecked tanker in the gulf. Aware of his plan, the merpeople have decided to send an emissary to get to know him and then kill him. 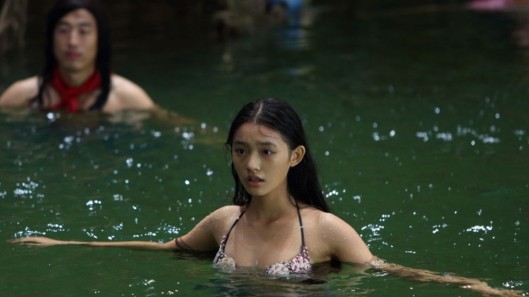 Their emissary is Sham (Lin), a young mermaid who has discovered a love of chicken, and music and dancing in her brief time out of water. She manages to meet Liu Xuan but he doesn’t pay her much attention, and it’s not until some time later that he calls her wanting to meet up. When he does and Sham finally gets to be alone with him, she finds herself beginning to like Liu Xuan, so much so that she’s unable to go through with the plan to kill him. The next day, Liu Xuan takes her out and asks her to marry him; he’s fallen in love with Sham’s appealing nature, and the fact that she’s not interested in his wealth. But when Sham says no, Liu Xuan goes to her home to get her to change her mind and finds himself captured by the merpeople, who tell him about the real effects that his sonar devices are having. Just as Octopus (Luo) is about to kill Liu Xuan, Sham helps him escape.

Coming to terms with the fact that the love of his life is half-human, half-fish, and that his sonar devices will cause her and the rest of the merpeople harm, Liu Xuan has the devices turned off. He tells Ruolan the reason why, and is shocked to learn that she has known about their existence all along – and wants to hunt them down. Outmanoeuvred by his business partner, Liu Xuan has no choice but to try and reach Sham and the merpeople, and warn them before it’s too late…

One thing to know in advance about Mermaid is that it’s a fairy tale, a fabulous concoction that features all the basic elements of a fairy tale, and which has the traditional fairy tale ending where good (in this case a reformed Liu Xuan) triumphs over evil (his money and power-obsessed partner, Ruolan). It’s a feelgood movie, entertaining and satisfying for the way in which it blends its environmental message into a narrative that is both fantastical and determinedly romantic, while also providing some huge laughs. Chow, whose previous credits include Shaolin Soccer (2001) and Kung Fu Hustle (2004), has fashioned the kind of family-friendly movie that can be enjoyed by all ages and he’s done so using a great deal of infectious charm.

It’s also unapologetically a Chinese movie, which means that some of the humour may seem a little juvenile, or off, at times – one scene, where Octopus has to submit to having his tenatacles turned into sushi is likely to have Western audiences questioning whether or not such submissive mutilation is truly a source for laughter – but if you go with it there’s lots to enjoy, a goofy, carefree sense of mischief that’s hard to ignore. The movie’s funniest scene comes after Liu Xuan escapes from the tanker and tries to report what’s happened to the local police. Mermaid is worth seeing purely for the various mermaid drawings one of the officers comes up with.

Set against this is the kind of heightened, bordering on ridiculously saccharine romance that only the Chinese can do so well, with Liu Xuan’s and Sham’s relationship encountering the type of unforeseen obstacles that would cause most couples to call it a day, but which here serve only to strengthen their feelings for each other. From the scene where they serenade each other with Liu Xuan’s favourite song, to the moment where Sham saves his life, their relationship is peppered with the type of challenges that only true love was designed to overcome. Both Deng and Lin have enormous fun with their roles, and this translates to the screen, making their scenes together a joy to watch (and even more so when you consider that Lin, who’d never acted before, won her role through taking part in a talent contest-cum-audition).

There are faults, however. Chow changes the tone too many times to make the movie feel like a cohesive whole, and viewers may find themselves confused by some of Chow’s decisions both as co-screenwriter (with seven others!) and director. And while the visual effects are by and large very successful indeed, some of them are decidedly second-rate as well, and often in a scene where they’ve already been hugely impressive. But these aren’t enough to detract from the overall enjoyment the movie provides, and the often childlike sense of wonder it manages to instill.

Rating: 8/10 – a wonderful surprise for anyone who takes the time to watch it, Mermaid has heart and soul and charm by the bucket load; with terrific performances from its two leads, and a knowing sense of its own absurdity, it’s a movie that rewards the viewer over and over again without even trying too hard.