Filmed in front of a live audience at the Murphy Theatre in Wilmington, Ohio, where the majority of people there have already indicated they will vote for Donald Trump in the upcoming US Presidential election on 8 November, Michael Moore in Trumpland is aptly named. (In an ironic twist on the value afforded free speech in America, Moore originally planned to perform his show at the Midland Theatre in Newark, Ohio, but the management nixed the idea.) Moore addresses the the relative virtues of both candidates, and asks the audience why it is that of the two, Hillary Clinton has been so stigmatised and attacked by her peers since her husband became President back in 1993.

In practice, Moore is reliably left-wing, but prefers to be thought of as a political activist, so this is an unsurprising move (and movie) from Moore. Releasing such a documentary with only weeks to go before the election, there’s little chance he’ll have any discernible effect on the way people vote come 8 November, but ever the optimist, Moore gives it his best shot. His audience, supposedly made up of confirmed Trump voters, seem more than willing to give Moore’s less than impassioned rhetoric a chance, and he regularly picks up laughs at both candidate’s expense (there’s even a moment where some audience members stand and applaud him). With the audience increasingly agreeing with him (especially the women), Moore basks in the rosy glow of the political commentator who appears deliberately partisan – at first – but who then reveals his own preference for President. 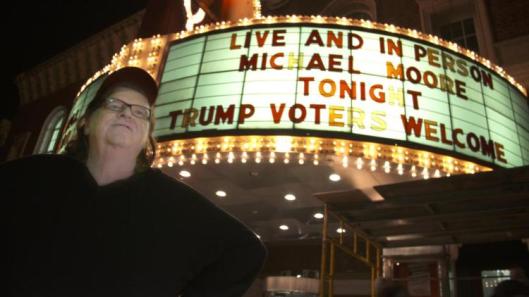 What Moore does that is clever is not to vilify Donald Trump outright. Instead he highlights some of Trump’s more extreme views by having his Mexican and Muslim audience members segregated at the back of the theatre. The Mexicans, and one Guatemalan woman, are kept behind a representation of the wall Trump wants to build along the US-Mexico border. The Muslims are kept watch over by a drone, which at least isn’t armed. It’s broad, uncomfortable humour that is maintained throughout the show, and by picking on these particular ethnic communities, Moore ends up being just as objectionable in his approach as Trump is with his. The wall and the drone remain in place (apparently) throughout; did Moore need to be this heavyhanded?

With the Mexicans and the Muslims sidelined because of Trump’s dislike for them, Moore sidesteps around Trump entirely and focuses on the decline of the white American male. He reveals his theory that men are becoming increasingly unnecessary in a world where there are more women than men and the birth rate amongst males is declining. Anxiety about the male role – “there are more women in law schools than men” – is at the heart of the typical Trump voter, posits Moore, and he makes a convincing argument, even if it does require a bit of a leap of understanding. It’s an extended sequence that has many women in the audience nodding their heads in acknowledgment, and several of the men looking stony-faced and unhappy at their perceived masculinity being lampooned in such a way.

He moves on to further highlight the demographic that is likely to vote for Trump based on promises he’s made: the poor, disadvantaged person who doesn’t have a job, maybe not even a home or a family, but who does have a vote, that one precious right that will mean they’ll vote for Trump because he’s promised to make things right for them, and he’s promised to go after the institutions that have contributed to so many people becoming dispossessed. As Moore puts it, “Trump’s election is going to be the biggest ‘Fuck you’ ever recorded in human history”. It’s a powerful moment, and the audience is deathly quiet, hanging on Moore’s every word, because he makes the one salient point that everyone seems to be overlooking: voting for Trump will be voting for the wrong reason, because Trump has no intention on following through on his promises.

Moore follows this up with a mock TV news report that shows what the US will be like once Trump is elected and moves into the White House. It’s a clumsy, awkward device, and it sits uneasily against the convincing, well thought out oratory of the previous minutes. It’s often the way with Moore: he makes a passionate plea for change or understanding or the use of common sense, and then he bludgeons everyone with the same point, almost as if he thinks he’s dealing with people who couldn’t possibly work it out for themselves (which is ironic, as that’s what he’s hoping for).

And then it’s Hillary’s turn, in the movie’s final section, and the one where Moore wears his heart, almost literally, on his sleeve. He likes Hillary, once called her a “hot, shit-kicking feminist babe”, and he bemoans the treatment she’s received over the years. This leads to Moore bringing in Pope Francis because he thinks they have a lot in common (and yes, this is a bit of a stretch), and he asks the audience to say nice things about her (even the Republicans and Trump voters). It’s a heartfelt but naïve approach, as Moore makes the most of Hillary’s virtues, and he explains why everyone has a chance to atone for the way she was treated in the past, and is still treated now.

By the end, Moore has made his position clear: vote for Hillary because it’s the right thing to do for the country, for America. The audience seems to agree with him because he gets a standing ovation. But throughout there have been shots of those audience members who clearly don’t agree with him, and who remain unmoved, even when he appears to be remarking on Trump’s good points. As a result it all smacks of too little, too late, and Moore himself lacks the anger and the disgust seen in previous documentaries. He’s impassioned at times, but this is less a rallying call than a plea to be nice to Hillary.

It’s hard to believe that Moore, despite his research and friendly approach, thinks that this will have any impact on the hearts and minds of American voters in a few weeks’ time. Liberals and democrats will vote for Hillary, right-wingers and Republicans (mostly) will vote for Trump. And there’ll be a sizeable portion of the electorate that won’t decide until the day itself. All this is normal, and all this is entirely predictable. It’s easy to see why Moore has released this movie, but as an intelligent, well-reasoned, though one-sided “debate” there are too many longeuers and references to issues away from the Presidential race to make Moore’s latest documentary as effective as he may have hoped. It’s good that he’s tried to “clear the air”, but in taking a less aggressive tone than usual, Moore has let both candidates off the hook for their past misdeeds, and in doing so, has made his show too much about him, and not enough about them.

Rating: 7/10 – with Moore displaying less outrage than on previous outings – only his disgust at the lack of healthcare reforms leading to 50,000 deaths a year really gets him angry – Michael Moore in TrumpLand ends up looking and sounding more tepid than vital; as a vehicle for raising political awareness it also falls short, and as an examination of the candidates’ campaigns it doesn’t even get started, but this is very much a love letter to Hillary above all else, a decision that both overwhelms and undermines the movie at the very same time.

NOTE: There’s no trailer available for Michael Moore in TrumpLand.