After the tragic death of their baby daughter, Dana (Beckinsale) and David (Raido), and their son, Lucas (Joiner), relocate to a rundown, rural dream home. Haunted by their daughter’s death, Dana soon begins to hear the sounds of a baby crying, and also the sound of dripping water. She traces the dripping water sounds to a leak from the roof, but still hears a baby crying and other noises; she also sees a strange dog outside. David is oblivious to all this, and doesn’t think it’s at all mysterious when Dana discovers a hidden room in the attic that isn’t on the plans. Investigating it further the next day, she finds herself locked in and threatened by a malevolent force. Hours pass, but when she finally manages to get out of the room, she learns that only minutes have passed, and not hours; and that David is worried she’s not taking her medication (to help her deal with her grief).

With the help of a local historian (DeRousse), Dana discovers that the house has a disappointments room, a room that would have been used to hide away a child born with a deformity or some such, and which would have been highly embarrassing to its (usually) upper class family. Dana’s research uncovers a previous owner, Judge Blacker (McRaney), whose daughter, Laura, was believed to have died in childbirth. But Dana suspects Laura was the inhabitant of the disappointments room, and that it’s her spirit that is haunting the house. With a local workman (Till) helping restore the house, and Dana becoming increasingly disturbed by the things she’s seeing, the truth behind the disappointments room slowly begins to unfold, and Dana begins to understand that there’s a far more malevolent force at work… 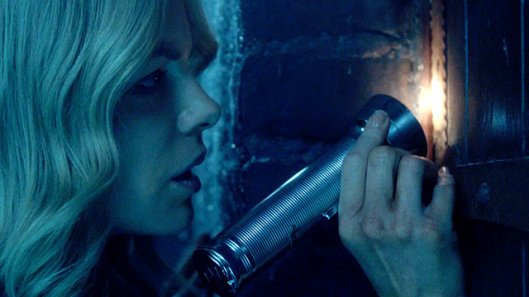 For a horror movie to have the word “disappointment” anywhere in its title is asking for trouble (or it’s being incredibly reckless). And The Disappointments Room, ah, doesn’t let us, or itself, down in that respect. It’s yet another haunted house movie where things happen for no reason at all, and scenes take place that are by-and-large independent of each other and only fit together if the viewer is lucky. The script – by director Caruso and Wentworth Miller – likes to play with visual motifs, like a child’s kite seen in historical photos floating above the house, even though it would have been proof of a child’s existence when there shouldn’t have been any; and it likes to have things happen outside the house when it’s clear that the ghost responsible for all the shenanigans doesn’t stray outside at all (so shouldn’t have that much influence).

Away from the kind of plot holes that you could fit an entire haunted house through twice over, the movie aims very low in its attempts to be scary or frightening, and falls back too often on the kind of traditional haunted house set ups that now invoke yawns rather than tension. Against such a plain, derivative backdrop, Beckinsale has no option but to put in a generic genre performance and walk away with as much dignity as she can manage. The rest of the cast lack for things to do, especially Raido, and Caruso’s directorial style largely involves ignoring how tedious and pedestrian the script is, and that the whole thing – though no more preposterous than usual – lacks energy and any kind of visual panache. It’s a glum, uninvolving movie to watch, and it isn’t helped by Brian Tyler’s overbearing, cliché-driven score.

Rating: 3/10 – bad horror movies are ten a penny these days – in fact, they’re ten a penny on most days – but The Disappointments Room is a particularly bad horror movie, one that can’t be bothered to be better than it is; hackneyed, with poor/lazy performances, and a terrible sense of its own effectiveness, it outstays its welcome within the first five minutes, and never once feels as if it’s about to surprise the viewer or give them something/someone to care about.

In 1969, a reporter, Larry Redmon (Whannell), goes on a killing spree in the town of Madison, Wisconsin. Fast forward forty-seven years and three university students – couple Elliot (Smith) and Sasha (Bonas), and best friend John (Laviscount) – rent an old house on the outskirts of town, and soon they’re having more than their fair share of weird experiences. After a housewarming party, a friend of Sasha’s, Kim (Kanell), performs a cleansing ceremony, but it doesn’t work. Soon she’s telling them that “something” is coming. Later, Elliot finds a sheet of paper with the words “Don’t think it” and “Don’t say it” written on it over and over again. These words are a caution relating to a supernatural entity known as the Bye Bye Man. If you say or think his name, he will come for you and he will make you do terrible things – like Larry Redmon did.

Soon the trio are seeing things and their own inner fears are being exploited. Elliot digs into the origins of the Bye Bye Man, while at the same time becoming ever more certain that Sasha and John are sleeping together. Sasha becomes increasingly ill, while John becomes more and more paranoid. When Kim is killed, the police become involved. And when Elliot tracks down Larry Redmon’s widow (Dunaway), he discovers a way to defeat the Bye Bye Man. But when he returns to the house, circumstances dictate that he might never get the opportunity to use his newfound knowledge, as the Bye Bye Man is there already…

A better tagline for The Bye Bye Man would be “Don’t try it, don’t see it”, as this adaptation of The Bridge to Body Island, a chapter from Robert Damon Schneck’s non-fiction book The President’s Vampire, is one of the most poorly written, directed, and acted horror movies of recent years. Aside from the bravura pre-credits sequence where Larry Redmon goes on the rampage, The Bye Bye Man struggles at almost every turn in its attempts at telling a cohesive, halfway credible story, and fails to deliver any tension, any shocks, any drama, or any let-up from the crushing banality of Jonathan Penner’s screenplay. It’s as if Penner has watched a dozen or so recent horror movies featuring supernatural creatures, taken the worst aspects of those movies’ scripts, and put them all together to make this movie look and sound as atrocious as possible.

Things are further compounded by Title’s haphazard, scattershot approach to the material, directing most scenes as if she had no idea what was going to happen next (which would be odd, as Penner is her husband). She’s also unable to elicit one decent performance from anyone in the whole movie; even the likes of Dunaway and Moss have no chance when faced with such terrible dialogue and even worse character motivation. Bonas favours one facial expression throughout (sleepy), Laviscount does angry young man whatever the scene, and Smith is so bad you hope the Bye Bye Man gets him first. Things are further hampered by James Kniest’s unimaginative framing and cinematography, and worst of all, Ken Blackwell’s laissez-faire editing, which takes the movie to new depths of awfulness.

Rating: 3/10 – sometimes you wonder how some horror movies get a general release and don’t go straight to video, and The Bye Bye Man is one such horror movie; a real stinker, it insults its audience at every turn, can’t even rustle up an origin story for its title character, tries for franchise levels of integrity that are never achieved, and should be used as an object lesson in how not to make a supernatural creature feature.