The awkwardly titled Viceroy’s House opens with a quote by Winston Churchill: “History is written by the victors.” Bearing in mind the story that follows, it’s hard to see why this particular quote has been chosen to open the movie. Perhaps director Gurinder Chadha is using it in an ironic fashion; any winners borne out of the terrible circumstances and outcomes surrounding the partition of India in 1947 may not have been aware of their having “won” anything at the time – even those who wanted the creation of Pakistan.

One thing that soon becomes apparent from watching the movie is that it’s going to be a politics-lite experience, with little depth beyond that given to an adaptation being shown on UK Sunday evening television. This means that some viewers, especially those with little awareness of the period when the British withdrew from India, and the terrible consequences that followed, will take much of what the movie tells them to heart. What should be made clear from the start is that Viceroy’s House is better viewed as an impression of those events than as a recreation.

The problem here is that one of the most traumatic upheavals of the 20th Century that involved a country and fifteen million of its inhabitants – those who were displaced – is given an unremarkable soap opera sheen that paints the British as saviours, and the Indian people as the authors of their own downfall. As an interpretation of what actually occurred on the Indian sub-continent, the movie takes several factual liberties with the events surrounding partition, and panders to the idea that the frustration experienced by Lord Louis Mountbatten (known more familiarly as “Dickie”) (Bonneville) is somehow more affecting and deserving of our sympathy than the political and social upheavals being experienced by India’s Hindu, Muslim and Sikh communities. As a dramatic approach to the material, it’s akin to asking an audience to be more sympathetic towards someone with a slight case of sunburn than someone who’s lost a limb.

The obvious comparison here is with the TV series Upstairs, Downstairs (or Downton Abbey for that matter, which also stars Bonneville). By attempting to focus on both the political machinations going on above stairs and the social upheavals occurring below stairs, Viceroy’s House tries to show the effect of partition on the British and the Indians alike. But the script – by Paul Mayeda Berges, Moira Buffini, and Chadha – takes an uncomfortable approach to the historical material, and tries to add a standard Romeo and Juliet-style romance to proceedings through the attraction between valet Jeet Kumar (Dayal) and lady’s attendant Aalia Noor (Qureshi). Alas, and despite the best efforts of Dayal and Qureshi, their romance is a tepid affair that occupies too much screen time, and lacks the kind of epic passion that could be seen as a compelling reflection of the violent passions of a country expressing itself through mounting conflict.

Other members of the Viceroy’s staff have arguments and cause problems from time to time, and Mountbatten is seen to berate them as if they were all naughty children. It’s a condescending attitude that extends to Mountbatten’s meetings with India’s leading politicians. Whether it’s Nehru (Ghani), Jinnah (Smith) or Ghandi (Dabi), the movie has “Dickie” treating them as if they should all just get along because he needs them to. And as a sop to the current need for strong female characters in pretty much every movie being made, Lady Edwina Mountbatten (Anderson) is portrayed as the “brains of the outfit”, while at the same time falling victim to the idea that their predicament is worse than that of the Indian people (“How can it be getting worse under us?”).

As the inevitability of partition looms ever nearer, and outbreaks of violence become the norm, Mountbatten is pushed into a corner and forced to accept that there can’t be a united India. With Pakistan now a certainty, he’s required to divide India into two, and enlists British lawyer Sir Cyril Radcliffe (Callow) to carry out the task. But it proves too difficult, until he’s advised by General Ismay (Gambon), Mountbatten’s advisor on all things Indian and political, that there is a solution. It’s here that the movie cements its appreciation and sympathy for the Viceroy by showing him as having been tricked by the British Government and set up for a fall if the violence continues and/or escalates out of control. It’s a moment that should elicit a good deal of compassion for “poor old” Mountbatten, but instead makes the viewer realise that Chadha feels more for him than she does for the Indian people. 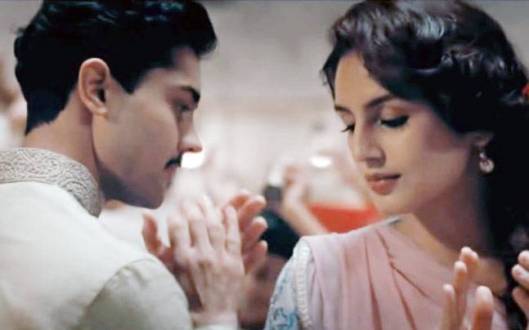 Much else in the movie is perfunctory stuff designed to move the story forward with the least amount of effort or acknowledgment as to how dry and uninvolving it all is. Chadha directs with a minimum of fuss or apparent enthusiasm, leaving some scenes feeling cursory and superficial. Against this, the cast can only do their best, though Anderson manages to imbue Lady Mountbatten with a supportive, agreeable nature that makes her feel like more of a fully rounded character than anyone else. Bonneville is a good choice for “Dickie” (though he doesn’t look anything like him), but even he’s held back by a script that paints Mountbatten, somewhat plainly, as a good man in a bad situation (though if you need someone to portray “pained frustration” then Bonneville’s your man).

For someone whose family were involved in the partition and the subsequent resettlement of so many people, Chadha doesn’t always seem interested in telling a coherent, responsible story. Muslims are unlikely to be happy about the way in which they are shown to be the main instigators of the violence depicted, while the religious enmities between Muslims and Hindus are reduced to petty squabbling, a direction that is extended to the encounters between Nehru and Jinnah – if you believe the movie, then neither man could be in the same room as the other without resorting to childish bickering. By reducing the key players’ importance in this way, and by playing up the ineffective nature of Mountbatten’s tenure as Viceroy, the movie ends up paying lip service to a terrible period in India’s history, a period that deserves a much more focused and intelligent approach than is featured here.

Rating: 4/10 – sporadically effective as a heritage picture, Viceroy’s House is let down by its one-sided consideration of British colonialism, and by its insistence on depicting Indians of the time as quarreling malcontents; nowhere is freedom from oppression expressed as forcibly as needed, and the movie’s tacit exoneration of Great Britain’s often brutal occupation makes for an uncomfortable viewing experience throughout.