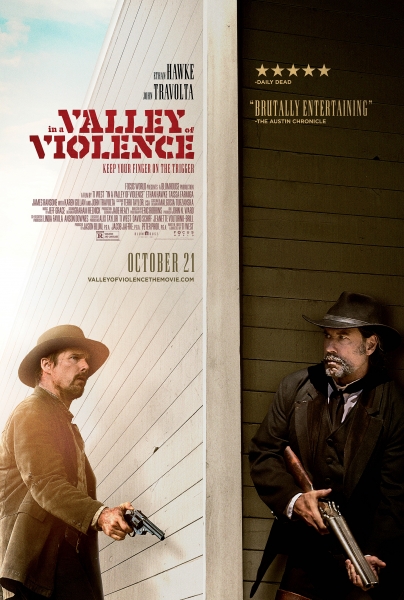 These days, Westerns come and go infrequently, but largely seem to be a cause for (minor) celebration. A genre that had its heyday in the Fifties and Sixties, the Western was a simple beast, telling classic tales of good versus evil (white hats versus black hats, cowboys versus Indians), until they got darker, more symbolic, and infused with heavy psychological importance. In the last twenty years, the Western has lain relatively dormant. But for some movie makers, the Western is a genre that’s ripe for re-evaluation and examination. Ti West, who has made his name on the back of a run of horror thrillers, is one such movie maker. And so, we have In a Valley of Violence, his “tribute” to the Western genre.

It begins with a recognisable Western encounter. A lone rider (Hawke) comes upon a priest (Gorman), who’s stranded thanks to a lame mule. He’s looking to get to the nearest town, Denton, but needs help. He pulls a gun on the lone rider, but it has no effect whatsoever; the man doesn’t appear worried in the slightest. The next thing the priest knows, the man’s dog has him by his gun arm, and the tables have been turned in an instant. The man doesn’t kill him, though. Instead, he takes the priest’s water and the bullets from his gun, and lets him live. He rides off, heading for Mexico, and at first, he’s intending to avoid Denton, but when he sees what kind of a detour he’d need to make to avoid it, he decides passing through is the better option. As long as he doesn’t draw any attention to himself…

Ten minutes in and already we’re in classic Western territory (almost as classic as its New Mexico setting). We’ve got the tactiturn, quick-witted loner (whose name we later discover is Paul), and we have a supporting character in the priest that you can be sure will make another appearance later on. And then there’s Denton, a town that, according to the priest, is “run by sinners”. As Paul heads into town, the viewer could almost be asking themselves, “What could possibly go wrong?” The answer is as obvious as the scar on the side of Paul’s face: everything.

And at first, it looks as if West is going to honour all the staples of a Western movie. The loner rides into town, and within minutes is being challenged by the town bully, a loudmouth by the name of Gilly Martin (Ransone). A showdown is on the cards, as Gilly goads the stranger in town into a gunfight. But here’s where West wrong foots the audience, and instead of a classic gunfight in the middle of the street, Gilly’s efforts to call out Paul meet with quiet dismissal. Until Gilly realises that Paul’s dog is across the street and makes a threatening move towards it. It’s too much for Paul: he comes out, water bowl for the dog in hand, throws it at Gilly, and when he catches it, Paul punches him once in the face and lays him out. Not a shot fired, not even a gun drawn out of a holster. The lead-up is stretched out, but the fight is short, and the outcome is funny as all hell. We’re in classic Western territory all right, but somewhere along the way, West has taken his audience down a different trail, and though quite a lot of what follows cleaves to the staples mentioned above, it’s clear that West is going to put his own spin on things.

But therein lies the problem with the movie as a whole: it’s a classic Western that’s been bent out of shape, and though it looks like a Western, and it sounds like a Western (even down to Jeff Grace’s Morricone-inspired score), it’s only a Western in terms of its starting-off point. Once Paul throws that bowl, we’re in a whole different kind of Western altogether, and a lot of it doesn’t fit together. There’s a lot of sly humour here, and while it would be unfair to pin the blame for the movie’s unevenness on the humour alone, it does contribute greatly to the sense that West, while he definitely wanted to make a Western, didn’t quite know what kind of Western he wanted to make. As a result, bullets do fly, and revenge is placed firmly on the table as a motivating force for the violence, but there are other elements – sibling rivalry, public confidence in the town marshal (Travolta), bravery and cowardice co-existing at the same time in most of the characters, lead-footed moments of irony – that are part of the material, and which serve to either slow down the movie, or make it seem ragged and unfocused.

The other problem is with the characters themselves, archetypes that are also twisted out of shape. At one pivotal point in the narrative, Paul is ambushed by Gilly and his men. West can’t decide from one moment to the next if Paul should be angry, upset, fearful for his life, pleading, or stubborn in the face of imminent death, and so has him be all of these things. Hawke’s a great actor, but even he can’t pull off all that. When we meet the marshal, we find he has a wooden leg and is of a temperament to let his son get a beating from a stranger (yes, Gilly is his son), and not pursue it because he knows what his son is like. The wooden leg proves to be incidental, while the decision to send Paul on his way, proves to be an awkward way of allowing the revenge angle to be introduced. Gilly himself is vainglorious and stupid, and vacillates between the two, sometimes in the same scene. As a result, Ransone has a hard time keeping him even remotely credible as a character. Farmiga is the sixteen-year-old whose husband has left her(!) and wants to leave town (but won’t do it unless a man takes her with him), while Gillan (as her sister) gets to screech a lot at Ransone, and generally behave like a spoilt brat. While many Westerns play up the stereotypes of the genre, usually it’s a welcome gambit – a movie shorthand, if you will – but here, the impression given is that West wasn’t too interested in having his characters interact or behave in a way that the audience could identify or sympathise with.

Visually, West does provide enough cues and familiar set ups to make his Western look and feel authentic, and the town of Denton is cleverly realised, from its boarded up church and empty saloon, to the absence of its townsfolk or any thriving businesses. It’s a ghost town in the making, and what better way to help it on its way than to bring in a lone stranger to kill most of the people who still remain there? Of course, being a Western there’s plenty of violence, and West doesn’t skimp on making it impactful and severe, with Fessenden and Ransone in particular suffering quite nastily at Hawke’s hands (and cutthroat razor, and boot). But again, there’s that humour to soften the blow, but it’s not as successful in that respect as West has probably intended. Instead the two elements sit together unhappily, with neither elevating the other.

Something of a vanity project for West, the movie does work for the most part, but there are too many occasions where the awkward mix of styles and elements derails the narrative, and brings everything up short. This leads to the movie having an awkward rhythm as well, with some scenes extended beyond their ability to be effective, or to advance the various storylines. Hawke is a great choice for the lead role, while Travolta appears to be having more fun than he’s had on a movie set in years. There’s enough to admire here without feeling that West has done his audience a disservice, but there’s also enough here to leave said audience also feeling that he hasn’t quite done enough for them either.

Rating: 6/10 – ambitious but ultimately disappointing given West’s track record so far, In a Valley of Violence never really reconciles itself as to what kind of Western it wants to be; Hawke and Travolta make for appealing adversaries, and there’s a sense that if West had adopted a more straightforward approach, this could have been the classic modern Western he was (perhaps) aiming for.