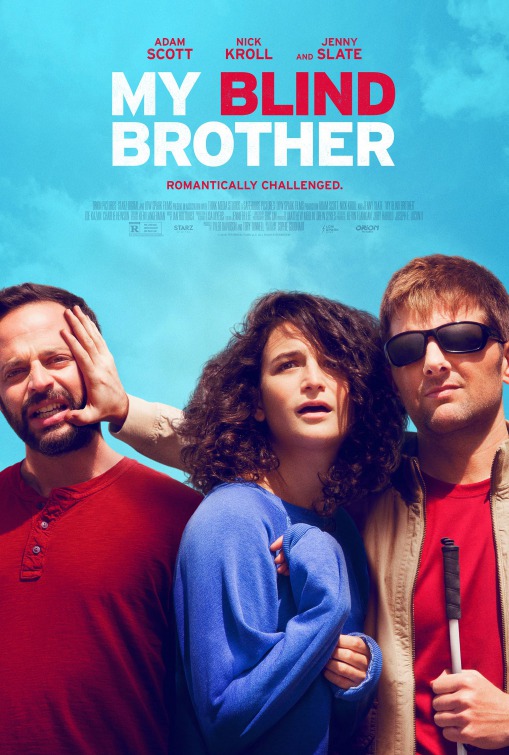 Robbie (Scott) is blind. His brother, Bill (Kroll), is not. Robbie is an athlete who regularly takes part in sponsored sporting events such as marathons in order to raise money for charity (and hey, if it gets him a little press or TV attention, that’s okay, isn’t it?). Bill is the manager of a small printing firm who regularly finds himself helping Robbie with his training, and taking part in each sponsored sporting event. Does he want to? Well, yes and no. Bill loves his brother, but deep down he wants to be free to live his own life and not defer so much of it to Robbie. This makes him feel guilty, which in turn pushes him to help his brother, which in turn makes him want to feel free to live his own life, which in turn makes him feel guilty, etc. etc.

It doesn’t help matters that Robbie is a bit of a jerk, one who never credits Bill for the help and support he provides, and who rarely acknowledges that he even needs any help in the first place. Living in Robbie’s shadow for so long – Robbie has been blind ever since a childhood accident – Bill has become aimless, self-deprecating, and bored. So when he meets Rose (Slate) at the wake for her boyfriend (who was knocked down and killed by a bus while having an argument with her), Bill’s emotional guilt over Robbie is matched by Rose’s feelings of guilt over her boyfriend. They find they have lots of things in common, and later on that same evening, they sleep together. 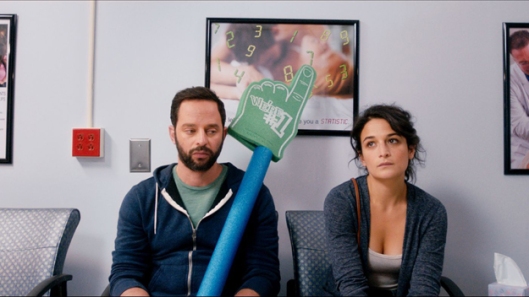 But in the morning, Rose has second thoughts about seeing Bill again, and tells him so. Upset and humiliated, Bill tries to forget about her, but he finds that he can’t. Meanwhile, Robbie announces his latest plan to swim across a local lake, but Bill stands his ground and refuses to take part. Robbie continues with the plan and finds a volunteer willing to help him train, and be in the boat that guides him across the lake. Of course, the volunteer is Rose, and when Bill finds out she’s helping his brother, he begins to take more of an active role in Robbie’s training. This leads to some unexpected complications (unexpected except in romantic comedies such as this one), as Bill realises he’s in love with Rose, Rose develops feelings for Robbie, and after not too long, Robbie takes it for granted that Rose and he are a couple. As the day of the swim approaches, the relationships of all three are tested, and certain revelations muddy the waters enough so that on the day, nothing goes quite as planned.

Early on in My Blind Brother, Bill reveals to Rose how much he doesn’t like Robbie, and that he sometimes wishes him harm. Later, we see him leave open a kitchen cupboard in order for Robbie to walk into it face first. It’s darker moments like these that make the movie a little more interesting than you’d expect given its low-budget indie roots and general indie demeanour. But My Blind Brother does its best not to be so predictable, and even though the outcome can be guessed before you even sit down to watch the movie, there’s still enough there in the run-up to keep audiences involved and amused. This is thanks mostly to Scott’s performance as Robbie, whose narcissistic, self-centred, arrogant tendencies mark him out as a rare creature of little depth or self-awareness. At a restaurant, he criticises another disabled man for being too noisy, and makes no apology for it. The message is clear: his disability is more “important” than anyone else’s. 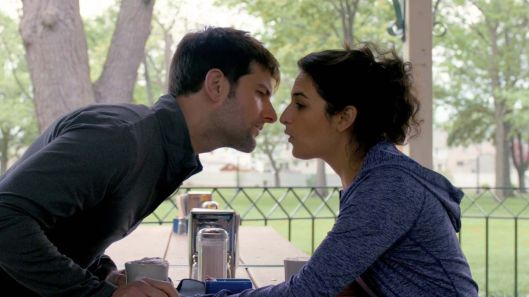 By making Robbie such a jerk, writer/director Goodhart – here expanding on her original 2003 short of the same name – allows the movie to retain a dramatic sensibility amidst the more standard rom-com tropes. As well, Bill is a bit of a maladjusted schlepp, the antithesis of Robbie’s hard-line positivity, a guy whose one ambition is to spend lots of time watching TV. When he discovers that this is one of Rose’s favourite pastimes, his face lights up with the unexpected joy of finding a kindred spirit. It’s no wonder he falls in love with her: she’s as unhappy as he is. But whereas Bill would be happy to wallow on his couch for the rest of his life, Rose at least wants to do something, even if she’s not sure what that something is. Thus her involvement with Robbie leads Bill to regain some of his self-respect, and shed the ennui that’s been holding him back.

These themes are spread throughout the script, and given equal screen time with the more comedic moments, such as the one pictured above, where Bill and Rose have been interrupted having sex by Robbie, and have to put their clothes back on without him realising what’s going on. Goodhart’s direction is so good in this scene. It’s not just the physical awkwardness of the moment, but the expressions on the faces of both Bill and Rose that makes the scene so funny. They barely have to say a word, and that’s what makes it so effective. Elsewhere there’s plenty of mileage to be made from Robbie’s overwhelming self-belief, whether he’s driving a car, jumping into a swimming pool, or patronising female reporters, and Bill’s perplexed looks when things don’t go his way. 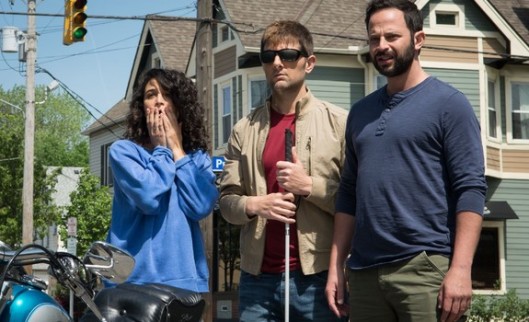 The romantic elements are handled well, and though viewers won’t find anything new on offer, it’s the quality of the performances and the sharpness of Goodhart’s script that makes up for any failings in the material. Scott’s portrayal of Robbie is often harsh and uncompromising; he’s like the pantomime villain everyone wants to boo and hiss. Kroll (the former Bobby Bottleservice) is lovable and sympathetic as Bill, and handles the darker aspects of his character with understated aplomb. Slate, an actress who impresses with each role she takes, and who was especially effective in Obvious Child (2014), brings an off-kilter sincerity to her role that helps define the character and her quirky understanding of personal responsibility. There are good supporting turns too from Kazan as Rose’s roommate, Francie, and Hewson as Bill’s blind, stoner friend, GT, while the script balances the light and shade of Robbie and Bill’s relationship with a good deal of appealing charm.

Watching My Blind Brother is one of those movie experiences where you think you know exactly what’s going to happen and how, but again, Goodhart’s script is much better than the basic storyline suggests, and though it ends exactly as it should, its caustic approach to the combative nature of Robbie and Bill’s relationship (exacerbated by Rose’s involvement with them both) elevates the material and aids the movie in avoiding being too lightweight or frivolous by comparison. If Robbie’s “advanced spatial awareness” means he moves around or picks things up a little too easily, then that’s a small quibble to make, but overall this is an enjoyable mix of the conventional and the unconventional that is well worth checking out.

Rating: 7/10 – a winning combination of comedy and drama that is easy to like and which is unafraid to try a slightly different approach to its basic rom-com storyline, My Blind Brother has an agreeableness to it that helps it stand out from the crowd; likely to be overlooked amongst all the other rom-coms that get released these days, it would be a shame if it failed completely to attract an audience, or missed out on the attention it deserves.