The tagline for King Arthur: Legend of the Sword is a simple yet effective one: “from nothing comes a king”. But to quote William Shakespeare (and with the most sincerest of apologies), a better tagline would be, “nothing will come of nothing”. In fact, there are several famous Shakespeare quotes that are apposite for Guy Ritchie’s latest outing, so in an effort to provide a unique review for a movie that offers nothing that is in the remotest sense “unique”, here are some of the Bard’s most well known pieces of dialogue, and their relevance to King Arthur: Legend of the Sword.

“Now is the winter of our discontent” (Richard III) – strictly speaking, it’s spring right now, but the sentiment remains the same whatever the season. Ritchie, along with co-screenwriters Joby Harold and Lionel Wigram (his producing partner), offers audiences a King Arthur re-style that lurches from one CGI-heavy action sequence to another, all of which are edited in such a way as to remove every last ounce of excitement from every single one of them. 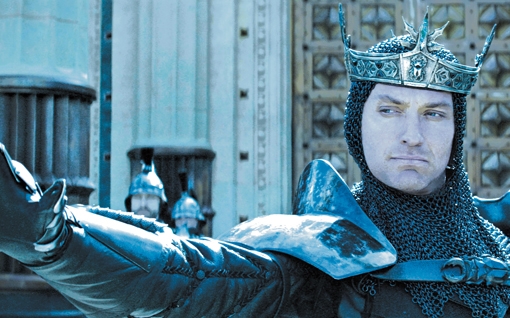 “Lord, what fools these mortals be!” (A Midsummer Night’s Dream) – it’s hard to work out just who fits this quote more, Warner Bros. for asking Ritchie to make this movie, or Ritchie for accepting the challenge. Perhaps it should be a joint award, as the end result stretches credibility at every turn, appears as if it was collated from a dozen different scripts, and ensures its cast of characters remain as one-dimensional as possible in order to match the quality of the narrative. This leads to Hunnam et al all struggling to give decent performances, and all looking uncomfortable throughout.

“We have seen better days” (Timon of Athens) – each year brings us a fantasy movie that attempts to bring us something out of the ordinary, something we haven’t seen before, and King Arthur: Legend of the Sword certainly has aspirations in that department, but instead it ends up looking and sounding like an uninspired retread/mash up of The Lord of the Rings (with bigger elephants), Game of Thrones (without the style), and weirdly, In the Name of the King: A Dungeon Siege Tale (2007) (skip the better days angle on this one). 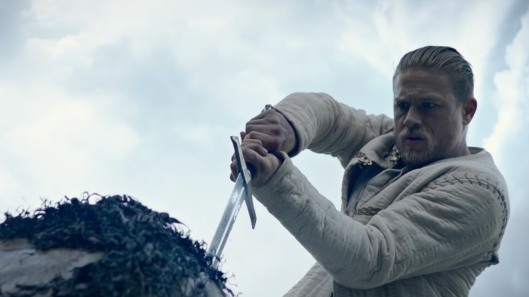 “Some are born great, some achieve greatness, and some have greatness thrust upon them” (Twelfth Night) – this is the central conceit that infuses the character of Arthur, but once again we have to put up with a character denying his destiny for half the movie before taking up the mantle that he’s been due all along, and then finally going out and kicking some ass. It’s a tired character arc that’s been done so often it’s lost any kind of dramatic weight, and now feels obligatory, as if every character faced with this kind of choice has to be humble and committed to self-denial. If the movie had really wanted to bring us something out of the ordinary, Arthur would have found out he was the rightful King, grabbed up Excalibur, left Londinium, and killed evil uncle Vortigern (Law) at the first opportunity (and shaved at least half an hour off the movie’s two hour running time).

“All that glisters is not gold” (The Merchant of Venice) – the presence of Ritchie behind the camera, and with such a talented cast in front of it, just goes to show that you can’t judge a movie by its intentions. If you saw the first trailer and thought, “Hmm, this looks great!” then a) the makers of that particular trailer got off lightly, and b) there’s not much anyone can do for you. This is a movie that delights in showing off its various boxes of tricks, but as so often happens in these cases (where ambition should have been strangled at birth), once the tricks have been showcased, it becomes obvious that there wasn’t any substance behind them at all. And this is what this movie wants you to forget: that it’s made up of various boxes of tricks and very little else.

“Misery acquaints a man with strange bedfellows” (The Tempest) – watching King Arthur: Legend of the Sword is an often painful, dispiriting way to spend a couple of hours, but it’s also one that should have no problem in uniting audiences in expressing their general displeasure at what they’ve witnessed. They say that watching movies at the cinema qualifies as a communal experience. It’s such a shame then that so many people are going to be disappointed by a movie that flails around looking for a cohesive story to tell, and which does so without any attempt at providing wit or panache to help it along.

“But, for my own part, it was Greek to me” (Julius Caesar) – in this reimagining of the Arthurian legend (complete with a Camelot that isn’t mentioned by name, only title caption), the once and future king is an East End brothel owner long before there were actual East End brothel owners, and long before anyone added the word “mate” to the end of a sentence. Ritchie and his screenwriter chums may believe this adds a certain piquancy to the dialogue, but instead it feels more out of place than organic, and on occasion, forced. It’s a verbal affectation that does the movie no favours and soon becomes distracting instead of part and parcel of the movie’s overall tone (as intended).

“It is a tale told by an idiot, full of sound and fury, signifying nothing” (Macbeth) – while Ritchie is by no means an idiot (libel lawyers take heed), this is still a movie that assaults the senses at every opportunity, and which never keeps still. This is a movie for people who can’t bear to see a shot last more than five seconds, who can’t watch an action sequence unless it’s cut into non-sequential chunks, and who like their soundtrack pumped up as much as the movie hopes they are already. The action lacks intensity (though it strives repeatedly to attain the intensity it needs in order to be halfway effective), and the spectacle soon becomes mind-numbing in its repetitiveness. And the occasional quiet moments? Just filler, until the next action sequence comes along.

Rating: 3/10 – you’ll laugh (unintentionally but often), you’ll cry (at the cumulative absurdity/lack of ideas on display), you’ll want to believe that somewhere, in an alternate reality perhaps, that Ritchie has made a masterpiece; alas, a terrible plot and central narrative counter any such notions, and King Arthur: Legend of the Sword reaches us adrift on a shoddy raft of its own making, taking on water with every swell, and capable only of letting off distress flare after distress flare.