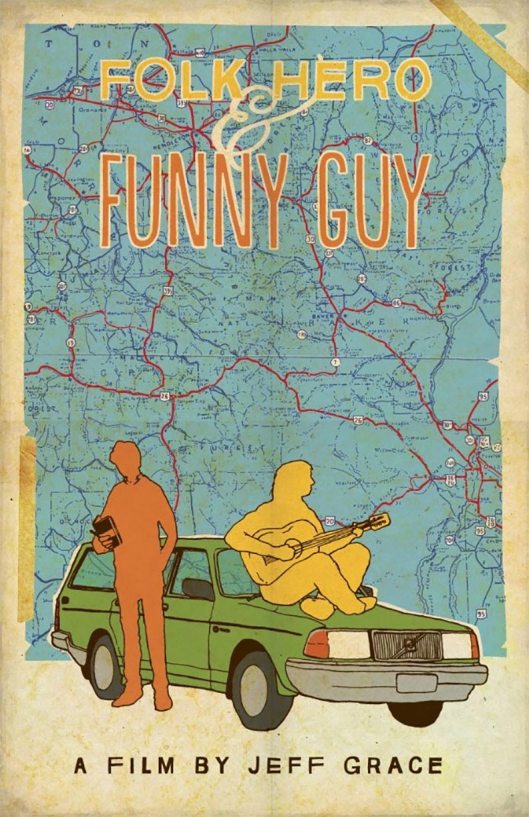 Paul Scott (Karpovsky) used to work in advertising, but he’s given it all up to be a stand-up comedian. His new career has its moments, but it’s still early days and he still has to refer to a notebook on stage for his material. Paul’s best friend since they were children is folk singer Jason Black (Russell). Jason’s career has brought him a degree of fame and popularity, and he’s the kind of carefree, live-for-the-moment guy that’s the complete opposite of Paul’s more grudging, dissatisfied approach to life (it doesn’t help that Paul’s just been dumped by his girlfriend). Seeing that his friend needs a bit of a lift, and some encouragement, Jason suggests Paul open for him on his upcoming solo tour. Paul thinks it might be a bit odd, a comedian opening for a folk singer, but Jason reassures him it’ll all be fine.

They set off in Jason’s battered old Volvo (his regular tour bus is too expensive for just the two of them), and on the first night of their trip they find themselves in a bar in Tom’s River, NJ, that has an open mic night. After hearing a very talented singer called Bryn (Hagner), Jason is cajoled into performing. While he does, Paul strikes up a conversation with Bryn, and they hit it off. The next morning, Paul is surprised to learn that Jason has invited Bryn along with them on the tour, and that she’s the new opening act, with Paul going on second. He’s a little flummoxed by it all, as he thought the tour was a chance for two old friends to spend some time together, but he’s also pleased because he’s attracted to Bryn and wants to get to know her better.

As the tour progresses, Paul and Bryn become good friends, while Jason pursues his usual vices. Bryn’s act goes down well with audiences, but Paul struggles to find the kind of form onstage that he can produce offstage. He begins to have second thoughts about being on the tour, and whether or not he should continue to pursue his dream. He and Bryn become closer still, until the revelation that she and Jason slept together that first night they all met, threatens to sever old and new friendships as Paul finds he’s unable to deal with it all…

Writer/director Jeff Grace – here making his feature debut – is also a stand-up comedian. Adam Ezra, who provides the movie’s original soundtrack, is a musician who it just so happens went on tour with Grace as his opening act. Using this as the basis of his screenplay, Grace has fashioned a perceptive, entertaining movie that has many pertinent things to say about the nature of old friendships, love and romance, and the downside of ambition. It’s a semi-serious comedy that isn’t afraid to show its three main characters in a less than flattering light, and it’s a very funny drama that highlights the difficulties involved in trying to start a relationship when you can’t articulate what you need from that relationship.

Paul is almost a classic underachiever, his personal life littered with regrets and misunderstandings that he can’t get past or overcome, and his new professional life proving to be just as frustrating. Part of the problem in both areas is that Paul doesn’t do enough to make things work in the way that they should. He makes the minimum effort required, and doesn’t see that this intransigence is what’s stopping him from achieving his goal as a stand-up, or committing fully to relationships. Even when he does try to commit, it’s done in such a way that the relationship is bound to founder as a result. Ultimately, Paul doesn’t trust in his own happiness, and he finds ways to sabotage things when they seem to be going well.

Jason is the exact opposite: confident, spontaneous, a risk taker, and someone who doesn’t overthink things. The tour is Jason’s idea of helping Paul regain some of the self-confidence that he had when he worked in advertising. He sees that Paul is down in the dumps, that his negative attitude needs challenging, but in the same way that Paul works against himself and any chance of contentment, Jason has the best of intentions but lacks the skill to reinvigorate his best friend’s life. He tries, but his efforts always backfire because he just can’t put himself in Paul’s shoes. Jason lacks the awareness that what pleases him and keeps him happy, isn’t going to work in the same way with Paul. There are times when you wonder just what it is that has kept them friends for so long, and Grace’s judicious script skirts this issue until the last night of the tour and the inevitable confrontation between the folk hero and the funny guy.

Grace handles the comedic elements with unsurprising aplomb, putting Paul on stage and letting him bomb in the same kamikaze way each time (“What is up with e-vites?”). It’s funny, sad and frustrating all at the same time, because before he gets to that point in his act, he always does so well. But Grace isn’t interested in making things easy for Paul – hell, even Paul isn’t interested in making things easy for himself – and Paul’s pent-up frustration leads to his being properly funny only when he lets things blow. It’s a good indication of the kind of stand-up comedian Paul could or should be, and Grace appears to be leading the audience in this direction when in fact he’s clever enough to steer everyone to a different place altogether. This makes the movie more intriguing than expected, and opens up the possibility that in good old indie movie fashion, things may not turn out so well for everyone at all.

Along the way, Grace gives Karpovsky some great routines to have fun with (until the rot has to kick in), and allows Russell and Hagner the chance to impress on more than one occasion with their soulful singing styles. All three give good performances in the kind of well written roles that only seem to come along in the indie sector these days, and in a brief supporting role, Melanie Lynskey proves yet again why she is one of the best character actresses working today. Grace does extremely well for a first-time director, drawing out the subtleties of his script with a sure hand and managing to avoid making it all look too obvious. If Paul’s intransigence becomes wearing after a while – and it does – then it’s a small price to pay for a movie that deals so effectively in portraying Paul’s downbeat persona, and counter-balancing it with Jason’s more hedonistic approach to everything. It all adds up to a movie brimming with heart and soul, and which never short changes its characters or its audience.

Rating: 8/10 – an appealing and thoughtful movie about the nature of unequal male friendships, Folk Hero & Funny Guy is also an irresistible road movie-romantic comedy-drama; with a great soundtrack and score, it’s a movie that signals Grace as a moviemaker to watch, confirms Russell to be an actor with an engaging, amiable screen presence, and features a screenplay that’s sympathetic and non-judgmental to all three of its main characters.