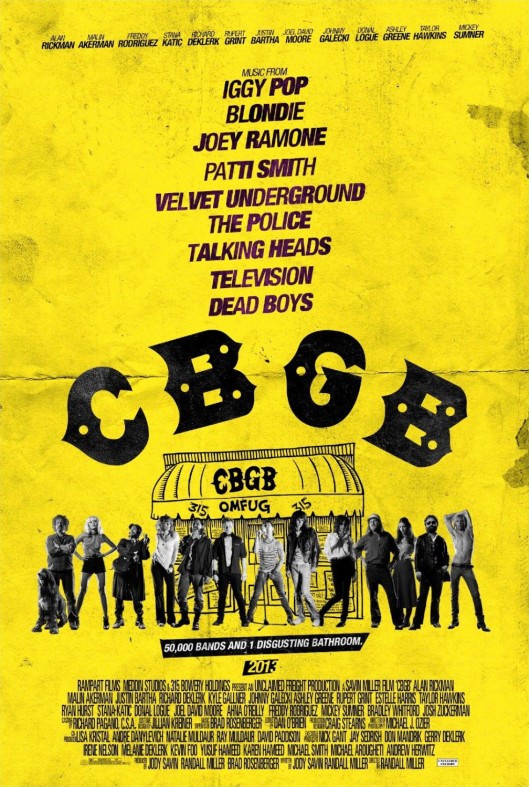 When a movie begins by telling its audience that punk began, not in the UK, but in a basement in New York in 1975, then you can be sure that the story you’re about to be told isn’t going to be too concerned with getting all the details absolutely correct. Admittedly, that’s the prerequisite of any movie portraying real events, but when it takes the time and effort to make such a statement (and such a questionable one at that), then it does tend to make the viewer question the validity of anything else that’s depicted. (That said, if you pay attention to the closing credits there’s an acknowledgment relating to Iggy Pop that’s more than a little relevant to any notions of fidelity to the truth.)

There’s a saying that, “If you remember the 60s, then you weren’t really there”. In truth you could substitute “the 60’s” for “CBGB’s” and the saying would retain the same meaning. And with the screenplay by director Randall Miller and Jody Savin not having been based on an article or a book or a memoir, how factual it all is becomes very much the issue. Because as a remembrance of (mostly) good times past, CBGB is a massive disappointment. This should have been a celebration of a period when underground music was making a bigger and bigger impact on the wider music industry, and helping to shape the future for emerging artists. Instead it quickly defaults into telling a piecemeal tale where CBGB’s owner, Hilly Kristal (Rickman), continuously mismanages the club to the point of near-bankruptcy, scenes revisit the same issues time and time again, characters pop in and out of the narrative with little reference as to why they’re there, and the viewer gets to play Spot the Famous Band Before They Were Famous. And that’s about it. 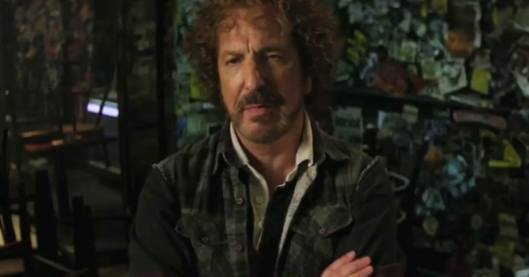 As an evocation of the late Seventies/early Eighties, CBGB rarely strays far enough away from its Bowery location to give any indication of the musical and cultural changes that were going on elsewhere, and relies on newspaper articles being read out to provide any sense that the club is having any greater impact than at a local level. As a result, the movie maintains an insular and largely passive tone that makes even the more dramatic events – a New York shakedown, band The Dead Boys crashing their tour bus – feel bland and uninteresting to watch. Part of the issue is with Kristal himself, who is portrayed as a man travelling the path of least resistance, and who seems passively intent on ruining the most successful business he’s ever had (when we meet him he’s in bankruptcy court for the second time). While his business partner, Merv (Logue), and daughter Lisa (Greene), continually berate him for ignoring the basics of owning a club (like paying the rent), Kristal floats above it all, oblivious to the risks to the club and focusing on the bands coming through his doors looking for a stage on which to express themselves.

With the main storyline – how did Kristal manage to keep the club open for so long? – failing to provide anything meaningful for the viewer to connect with, it falls to the music to add some flair and excitement to proceedings. However, despite the level of talent that appeared at the club over the years, and despite some very obvious choices – Television, Talking Heads, Blondie, Ramones, The Police – the musical interludes lack for energy, even when Justin Bartha throws himself around as Dead Boys’ singer Stiv Bators. When even the music that’s meant to be celebrated can’t make a difference to things then it’s time to close the club (or shutdown the movie) and send everyone home. 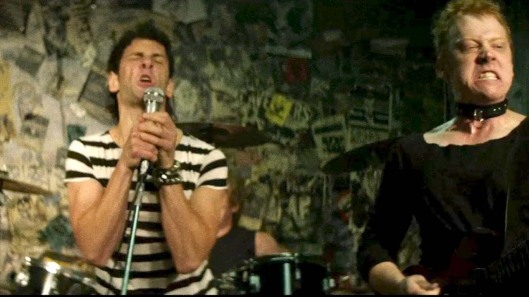 Thanks to the script the performances have no option but to range from adequate to perfunctory. Rickman is on good form in terms of expressing Kristal’s blasé attitude, but it ends up being the whole performance. Everyone else is a secondary character, with Logue, Greene and Hawkins (as Iggy Pop) faring best, and the rest contributing what are mostly extended cameos. Rodriguez is the junkie Kristal gives a kitchen job to, Grint looks out of place as Dead Boys’ bassist Cheetah Chrome (who really cameos as a cab driver), Harris is Kristal’s mother who when told Stiv Bators has been known to jerk off into Hilly’s Chili remarks that she’s “had worse in her mouth”, and Akerman is so stiff as Debbie Harry you’d be happy for the real thing to step in and take over (and despite Harry being seventy-two). When you have such a great cast and they’re given so little to work with, it definitely qualifies as a waste.

As alluded to above, the fault lies squarely with Miller and Savin’s script, and Miller’s direction. With the screenplay lacking purpose, and much of the dialogue sounding like the co-writers’ did a first pass and kept to what they’d written, there are too many occasions where what’s being said seems trivial and/or unlikely given the circumstances on screen. Miller seems unable to inject any verve or energy into proceedings, and the movie trails along in a functional, pedestrian way that saps what little vigour the movie does possess. By the movie’s end it’s hard to work out what the motive was behind making it, but if it was in tribute to Hilly Kristal and his championing of the underground music scene, then it’s unfortunate that his influence is best exemplified by an end credits sequence that shows real-life footage from the 2002 Rock and Roll Hall of Fame Induction Ceremony. Here we get to see Talking Heads accepting their award and inviting Kristal up on stage with them, and then thanking him for his support. Sadly, it’s the most poignant and moving moment in the whole movie.

Rating: 4/10 – lacking a clear purpose and repeating itself too often, CBGB at least has a killer soundtrack to fall back on – and thank heavens for that; less a biopic than a slow trawl through a defining era in the history of rock music, the movie spends too much time trying to define the iconic nature of the club, and in doing so, fails to portray adequately its influence on the wider music scene. (5/31)