A movie examining the intellectual and professional battle between Carl Jung (Fassbender) and Sigmund Freud (Mortensen) may not be the most obvious choice for David Cronenberg to direct, but there’s long been a psycho-sexual element to his movies that fits in quite easily with Jung and Freud’s combative attitudes about notions of sexual repression (though even they may have balked at some of the ideas Cronenberg came up with during his Seventies output). What emerges though is a movie that concentrates as much on the machinations of the mind as it does on the pleasures of the flesh.

The movie opens in 1902, with the arrival of Sabina Spielrein (Knightley) at the Burghölzli, a psychiatric hospital in Zurich. Sabina displays extreme manic behaviour and contorts her body into uncomfortable positions as an expression of her illness. She is placed in the care of a young doctor, Carl Jung. He begins treating her using various techniques including dream interpretation (though mostly he just asks her how certain events in her childhood made her feel). Sabina responds to the treatment and soon she makes a breakthrough in understanding the root cause of her mania. Wishing to be a psychanalyst (the term Jung uses), Sabina begins to help Jung with his research. Soon, he begins corresponding with Freud, and before long they have a mentor/pupil relationship despite some of the differences in their approach to psychoanalysis (the term Freud uses).

When Freud recommends Jung treat one of his patients, Otto Gross (Cassel), the man’s indulgence of his sexual desires and his insistence that sexual repression is at odds with living a normal, healthy life, serves to make Jung confront his desire for Sabina. They embark on an affair, one that Jung’s wife, Emma (Gadon), tolerates, while Jung himself continues his professional and personal relationship with Freud. However, at the same time that their friendship begins to deteriorate over their different opinions about psychoanalysis, Jung is struck by guilt and seeks to end his affair with Sabina. She involves Freud on her behalf but while he sympathises with her (and more so because Jung has lied to him about the affair), he is unable to intervene. Soon, he and Jung end their relationship, and Sabina strikes out on her own as a psychoanalyst.

Adapted partly from the book, A Most Dangerous Method by John Kerr, and partly from screenwriter Christopher Hampton’s play, The Talking Cure, A Dangerous Method is a beautifully shot movie (by DoP Peter Suschitzky) that features a marvellous, deftly arranged score by Howard Shore (based on leitmotifs from Wagner’s Siegfried), and a richly detailed recreation of early 20th century Europe (some parts of which didn’t need to be de-modernised at all). It’s also a movie that outlines and explains in simple terms the differences between Freud and Jung’s different approaches to psychoanalysis, while at the same time doing so in a way that maintains the mystique that surrounded their differing approaches (and for many people, still does). It’s all down to Hampton’s intelligent, precise screenplay and Cronenberg’s effortless way of telling the story. There’s not a wasted scene or moment in the whole movie.

Cronenberg shows a sure hand throughout, and as the inter-relationships between Jung and Freud, and Jung and Sabina, and eventually Sabina and Freud, begin to grow more and more intense, he allows the viewer a glimpse inside the mind and the motivations of each character, whether it’s Jung’s fear of professional repudiation, or Freud’s unyielding pragmatism, or even the enjoyment Sabina derives from being humiliated. These are characters, real life people, that we can understand and, to a degree, sympathise with. They were all involved in the creation of a field of medicine that has since been of benefit to millions upon millions. That they had their own problems shouldn’t be a surprise, anf thanks to Hampton’s erudite and very adroit script, those problems are fleshed out with tremendous skill, and in Cronenberg’s hands, delivered with impeccable attention to professional and emotional detail. Jung may have been more willing to explore other avenues relating to the way in which our subconscious works, but even Freud’s rigid demeanour and intellect are presented credibly and with no small amount of rigour.

The director is aided by a trio of superb performances. Mortensen, playing older, gives Freud a shrewd gravitas, appearing always thoughtful, always seeking to understand the impulses that drive everyone around him (and especially Jung). It’s a role that requires the actor to appear ruminative for long stretches, passively observing and deducing, and Mortensen carries it off with his usual skill and ingenuity. He’s also the source of much of the movie’s dry, offhand humour. Mortensen is such a thoughtful, articulate actor that his presence acts almost as a guarantee of quality, and working with Cronenberg for the third time – after A History of Violence (2005) and Eastern Promises (2007) – he renews that acquaintance to incredibly good effect. As Jung, Fassbender gets the lion’s share of the narrative, and gives a detailed, insightful performance that shows the doubts and concerns that Jung had in terms of his work, and his marriage, and his relationship with Sabina. It’s a well rounded portrayal, not lacking in emotional precision, and gives the actor a chance to impress in a role that requires much of the character’s feelings to be expressed internally, as befits both the period and contemporary public expectations. 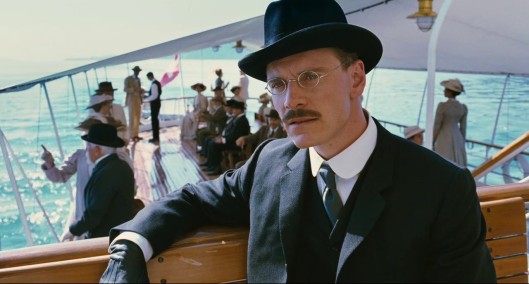 How different then for Keira Knightley, who right from the very beginning has to provide an hysteric performance, one that pushes her as an actress and one that pushes the audience’s acceptance of her as a dramatic actress (there’s no doubt that Knightley can act; it’s just that it gets easily forgotten when she’s also a celebrity). She brings a passion and a commitment to the role of Sabina that is powerful and uncomfortable to watch in her early scenes, and even though she gets “better”, the character’s mania remains there, just under the surface and ready to release itself at a moment’s notice. Here, Knightley’s angular features are used to strikingly good effect as Cronenberg keeps her looking as if every moment is a struggle to continue to be “normal”. She and Fassbender work well together, and their scenes are some of the most potent in the whole movie.

As a movie dealing with the birth of psychoanalysis as we know it today, the arguments for and against the theories of Jung and Freud are presented in a way that makes them both intriguing, and elusive, in terms of their true efficacy. Both men were convinced their own approaches were the correct ones, but the movie doesn’t side with either of them, leaving the viewer to make up their own minds as to which man is “right” and which man is “wrong”. Cronenberg orchestrates these discussions with admirable finesse, and if some scenes seem too clinical or distant from the heated passions they’re depicting, it’s in keeping with the notion that Jung and Freud, and even Sabina, were first and foremost observers, and that their own lives were just as worthy of inspection (or introspection) as anyone else’s. And perhaps even more so.

Rating: 8/10 – a vivid and captivating examination of the ways in which early forms of psychoanalysis drew on the experiences and sentiments of its practitioners, A Dangerous Method is absorbing and exhilarating in equal measure; with Cronenberg handling the material so sensitively and without over-simplifying things, it’s a movie that stands out for being about complex ideas as to what makes us tick, and isn’t just a vapid exploration of carnal desires. (14/31)