In 1939, Orson Welles (Schreiber), the “boy wonder”, signed a movie contract with RKO Pictures. He was given unprecedented freedom to make whatever movie he wanted (though RKO hoped he would make a movie version of his infamous War of the Worlds radio broadcast). After two attempts at making his first picture, Welles, along with old friend and writer Herman J. Mankiewicz (Malkovich) came up with the idea of making a loosely fictionalised version of the life of publishing magnate William Randolph Hearst (Cromwell). Welles regarded Hearst as a hypocrite and a monster, a man richly deserving of being exposed in much the same way that Hearst’s newspapers had done to others. Welles considered he had nothing to lose by making such a movie, but before long it became something much more personal, and with a great deal of meaning for him. RKO 281 – Citizen Kane‘s production number – shows how the movie came to be made, some of the pitfalls along the way, and the pressure Hearst tried to exert in order to make the movie disappear without the public ever seeing it.

Like many an acknowledged classic, Citizen Kane didn’t just appear out of nowhere. In RKO 281, we see the genesis of both the myth and the legend, and the movie itself. After a year in Hollywood, and with nothing to show for his efforts, Welles was already being looked upon as a failure, a circumstance that didn’t bother him in the slightest, but which would spur him on to make a movie that is generally regarded as the best American movie ever made. Based in part on the documentary The Battle Over Citizen Kane (1996), RKO 281 begins with Welles’ arrival in Hollywood, his fame preceeding him. Persuaded to come out there by RKO head George J. Schaefer (Scheider), Welles attends a dinner held by Hearst and is appalled by the man’s attitude and takes immediate offence. Soon he’s telling Mankiewicz that Hearst is the perfect subject for his first movie. But Mankiewicz isn’t so sure and tries to warn Welles of the trouble he’ll face if he goes ahead with his plan. 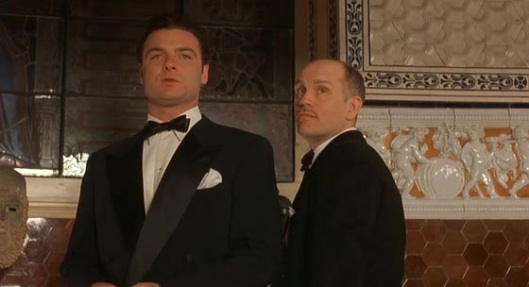 Soon, however, they have a screenplay, and though the two men have a falling out over Mankiewicz’s name being removed from the final script, the movie goes ahead and production begins in earnest. But Welles is soon behind, his quest for perfection causing delays and production overspends. The industry, still unaware of the content of Welles’ movie, predicts it will be a disaster. It’s only when news of its focus reaches the ears of Hearst that the possibility of its truly being a disaster becomes more likely. Determined to ensure that the movie, originally titled American, is never shown in cinemas, Hearst brings pressure to bear on the heads of the other studios, partly by playing the race card – that the heads were all Jewish wasn’t widely known or acknowledged – and partly by threatening to expose the immoral activities of their stars. While everyone else around him views Hearst as being entirely capable of destroying Welles’ career, and their own if he so wishes, it’s left to Welles to fight for his movie. Help, though, comes in an unexpected form…

The story behind the making of Citizen Kane is often as fascinating as the actual movie itself, and though RKO 281 uses The Battle Over Citizen Kane as its template for John Logan’s vigorous screenplay, there’s still a sense that this is a movie going over old ground, and without achieving the same effect. Logan certainly hits his mark as it were, and there are some priceless lines of dialogue – Mankiewicz on San Simeon, the massive estate where Hearst lived: “it’s the place God would have built if he had the money” – but once Hearst becomes aware of just how much of his life Welles has appropriated for Citizen Kane, the movie makes an unjustified attempt at becoming a thriller, with Welles’ career on the line versus Hearst’s reputation. And despite a passionate performance by Schreiber, and with the outcome already known in advance, the movie struggles to make Hearst’s threats as worrying as they must have been at the time, and he comes across as a petulant control freak. The same can be said for Welles also, and the movie makes the point several times over that the two men were very similar, but in doing this so often, it lessens the impact of what the movie is trying to say.

Before then, the movie focuses on the making of Citizen Kane, and here the movie is on firmer ground, replicating the ups and downs of the production with a great deal of enthusiasm, and recreating events such as the time that Welles had a massive hole dug in the studio floor to facilitate a particular low-level shot he wanted (apparently he never thought of raising the set instead). His relationship with the cinematographer, Gregg Toland (Cunningham) is also explored, but ultimately it’s his friendship with Mankiewicz that gets the most screen time, and the ways in which Welles exploited his friend’s talent. Both Schreiber and Malkovich relish the dialogue they’re given in their scenes together, and these scenes are some of the best in the movie, with both men sparking and feeding off each other to very good effect. Cromwell injects a little bit of pathos into his portrayal of Hearst, but it’s not enough to offset the idea that here is a man whose monomania – himself – has become a lifestyle choice. As the former silent actress Marion Davies, Griffith gives a sympathetic and sincere performance, while Scheider is equally good as the put-upon studio head who puts his career on the line to ensure Welles succeeds in getting his own off the ground.

The movie is attractively shot and lit by DoP Mike Southon, and there are some well chosen contemporary numbers on the soundtrack, but though the script is good enough to tell the story in a slightly lumbering fashion (there are very few highs and lows to help capture the intensity of the production itself), Ross’s direction is too pedestrian to elevate the material above that of solid and dependable. Too many scenes lack the energy to push the narrative forward with any real conviction, while others are repetitive in nature, as if the audience wouldn’t understand things the first time. And that’s without the scene near the end where the story contrives to have Welles and Hearst alone in an elevator – let the verbal sparring commence! It’s an unnecessary cinematic cliché that’s included in a movie about another movie that was anything but clichéd.

Rating: 7/10 – a mixed bag of a movie, with good performances overcoming several narrative slip-ups, RKO 281 is mostly intriguing if you don’t know the story, and fairly run of the mill if you do; still, it’s a movie that’s largely entertaining despite itself, and as a passive recreation of the making of one of the most influential features of all time, it’s effective without being too demanding. (18/31)