In recent years, low budget horror thrillers have had something of a resurgence, what with It Follows (2014), The Witch (2015), Split (2016), and Get Out (2017) all making an impact with audiences and critics alike. While there are still too many similar movies out there that lack the attention to detail or the originality of these particular examples, it’s heartening to see that some movie makers aren’t just content to rehash familiar stories and plots, and are willing to bringing something different to the table. In addition to the makers of the movies listed above, we now have to add the name of Trey Edward Shults. Making only his second feature, Shults has made a movie that is by turns eerie, unnerving and undeniably tense. It’s a post-apocalyptic thriller that slowly tightens the screws on its characters from the start, and makes no promises of a happy ending for any of them.

We discover things are bad right at the beginning, with Paul (Edgerton), his wife Sarah (Ejogo), and their teenage son, Travis (Harrison Jr), transporting an old man in a wheelbarrow to a clearing in the woods. The old man – who is Sarah’s father – is visibly ill. Paul shoots him, and he and Travis put the body in a shallow grave; they then burn it. The message is clear: anyone found to be contaminated by the disease that has ravaged the rest of the world, will be despatched in a similar fashion. They return to their home deep in the woods, where they barricade themselves inside. This is their life now, and Paul is determined to keep them from harm. That determination is put to the test the next night when they capture an intruder trying to break in. The man’s name is Will (Abbott), and he manages to convince Paul that he was only looking for food and water for himself and his wife, Kim (Keough), and young son Andrew (Faulkner). Satisfied that Will doesn’t have the disease, Paul agrees to travel with him to collect his wife and son. 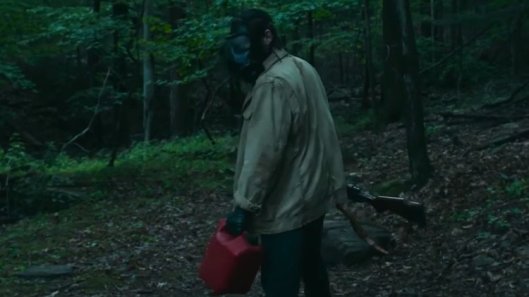 With Will’s family in the house as well, Paul impresses on the newcomers the rules that have kept him and his family safe, in particular ensuring the only entrance door is kept secure at night. The two families begin to learn to trust each other, but there are odd moments where Travis wonders if the stories Will and Kim tell are entirely true. On an excursion into the woods, Travis’s dog, Stanley, runs off and doesn’t come back. That night, Travis wakes from a nightmare, and in turn, discovers that the entrance door is ajar. Having wakened his father and Will, they discover a badly wounded Stanley just inside the door. Tensions mount when Sarah suggests that a sleepwalking Andrew might have opened the door, while Will and Kim accuse Travis. Tensions mount even further when Travis learns that Andrew may be infected, and Paul decides to finds out for himself…

For much of It Comes at Night, the audience is only given enough to appreciate the immediate situation, and what it means for the two families concerned. There’s no extended scene where someone describes the outbreak of the disease and how it happened, or how quickly it spread, or how easily society fell apart in the wake of the spread. Instead, it’s enough to know that the world has become an entirely dangerous place, and that trust may have become the most precious commodity on the planet. It’s easy to see that Paul is doing his best to protect his family, and it’s clear that he’s given their situation a lot of thought, but it’s also obvious that he’s had to make other, more personal sacrifices along the way, and though much of the story’s focus is on Travis and how he perceives events happening around him, Edgerton’s quiet, brooding performance is the movie’s touchstone. He’s a man who’s dispensed with the idea of social niceties, and if killing means survival, then that’s what he’ll do. Edgerton brings all this to the character, and though he’s sometimes on the periphery of a scene, his presence is as accurate a monitor of the movie’s overall mood as you’d need.

And that mood is pretty intense for most of the movie as the audience waits for the inevitable disintegration of the uneasy combination of two families with differing agendas co-existing in the same claustrophobic property. A veritable maze of a place, the house is a distorting labyrinth that allows for various spy holes and hiding places, and which allows Travis to be the conduit through which the viewer gains a broader understanding of the dynamics of both families, as well as his own growing understanding of the fault lines developing between them. Travis has recurring nightmares relating to the disease, and it’s his fear that gives the audience a way into a scenario that could otherwise have been just a mood piece. There’s a grim inevitability to the way in which this new, insular “society” breaks down, and Shults makes good use of the dread that comes along with it. Will Paul be able to protect his family or will events determine otherwise? And are Travis’s nightmares a foretaste of what’s to come?

For most of the movie’s well-judged running time, Shults handles the character dynamics with confidence and a consistent use of sparse, realistic dialogue. He also ensures that the mottled colour scheme of the property and the surrounding woods adds a melancholy layer to proceedings that is both dispiriting and oppressive. This isn’t a movie that provides much in the way of humour, and though smiles are appropriate on a couple of occasions, what Shults does is to use these moments as a way of leavening the pervading sense of anxiety that he’s building, and to help soften some of the blows to come. Inevitably though, there are a couple of issues that hinder the movie from becoming a complete success. There’s an awkward moment involving Travis and Kim that could best be described as a “seduction scene”, but which isn’t developed any further, and the issue of who opened the entrance door is left unsolved, which feels like a clumsy misstep from a writer/director who for the most part, is in firm control of everything else. It’s a frustrating lapse, as well, because it leaves the viewer waiting to find out who did open it, and for some, it’s likely to occupy their thoughts for the last twenty-five minutes. Those issues aside, though, It Comes at Night is a movie that continues that recent run of effective horror thrillers with more than a dash of style.

Rating: 8/10 – a slowburn thriller with horror overtones, It Comes at Night is also a sombre, doleful survivalist drama that is well-paced, confidently handled by its writer/director, and features a terrific performance from Edgerton; with a palpable sense of impending doom to weigh the characters down, it’s a movie with nihilist leanings and very little intention of sending the viewer away in a happy mood, but in terms of what it wants to achieve, it has to be considered a definite success.