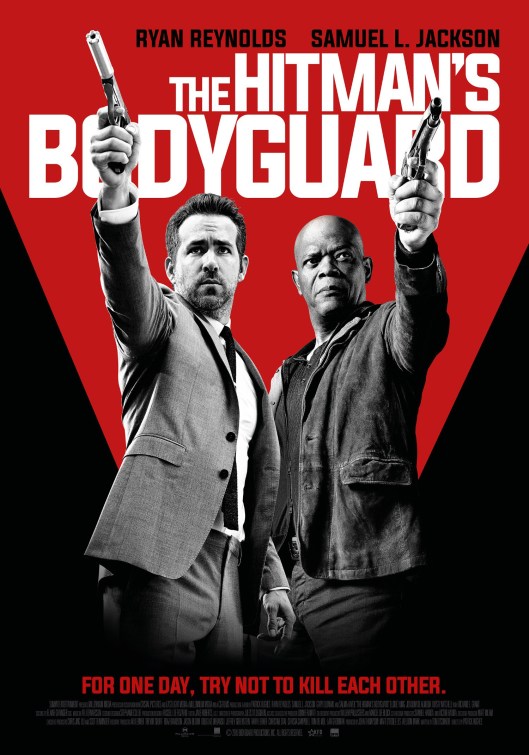 There are several moments during The Hitman’s Bodyguard, Hollywood’s latest attempt at the mismatched buddy genre of action thrillers, when the movie’s humour seems to come on a little too strong, as if it’s fighting its way into the script and looking to be front and centre. More often than not it’s a moment of physical comedy, such as the extended scene where Ryan Reynolds’ triple-A rated protection agent, Michael Bryce, is sitting at an outdoor Amsterdam café complaining about the behaviour of Samuel L. Jackson’s veteran assassin, Darius Kincaid. While he vents, chaos erupts all around him, as everyone in the vicinity ducks for cover, and bullets fly indiscriminately. The barman cowers, Bryce keeps on complaining, and eventually a car plows through the tables behind him. On the surface, it’s a funny scene, with Reynolds’ deadpan expression the counterpoint for all the mayhem going on behind him. But watch it a second time and the humour isn’t there anymore. Now it’s a technically clever scene that relies entirely on Reynolds’ performance. Watch it a third time, and it’s a scene to be endured. Should a scene like that provoke such a response so quickly? If it’s really that funny, then the answer is No.

For much of the rest of the movie, the script’s attempts at levity only serve to highlight just how uneven the material truly is. The humour is largely forced, the action is perfunctory (a chase along the canals in Amsterdam should see Kincaid’s commandeered boat reduced to splinters, or the involvement of at least one Dutch police car), and the basic plot is ludicrous before it’s even begun: Gary Oldman’s brutal Belarussian dictator, Dukhovich, on trial at the Hague for being a brutal Belarussian dictator, can only be brought to justice by the testimony of Jackson’s veteran assassin. Cue a race against time from Manchester, England to said trial, with the usual hundreds of disposable bad guys trying to stop Bryce and Kincaid from getting there. Along the way, Bryce’s back story takes up more and more time but never becomes interesting enough to warrant it (he’s still sulking over the death of a client under his protection, though technically the circumstances mean It doesn’t count), while Kincaid is ratting on Dukhovich as a way of getting his wife, Sonia (Hayek), out of jail (yes, folks, he’s doing it for love, the old softie).

It all plays out predictably enough, with supporting characters straight out of Stock City, including Yung’s Interpol agent, Amelia Roussel, who just happens to be Bryce’s ex-girlfriend, and de Almeida’s shifty Interpol boss who may well be in cahoots with Dukhovich (what are the odds?). No matter how much Tom O’Connor’s script tries to instil proceedings with freshness and vitality, the banal nature of the material as a whole brings those attempts crashing down like Redwoods. In the director’s chair, Hughes, who made more out of The Expendables 3 (2014) than was required, has no option but to go with the flow and let his stars do the heavy lifting. As long as he can get them from A to B, Hughes’s work is done, and often before the end of a scene. Others, but particularly those that feature Hayek’s apoplectic performance as Sonia, don’t appear to have had Hughes’ involvement at all. (Sonia looks and sounds like a character brought in from another movie altogether.) By the time we reach the end and justice is done, it’s become possibly the most generic action movie of the year.

But what of the chemistry between Reynolds and Jackson? Surely that’s in the movie’s favour? Well, strangely enough, the pair work better when they’re apart. Reynolds’ lovelorn, soppy-headed protection agent is like a man-child dropped into a war zone, while Jackson – well, Jackson trots out the same hard-headed “motherfucker”-spouting character he’s been portraying ever since the word was invented. Cue angry stare, mad-as-hell stare, glary stare, and angry mad-as-hell glary stare, all of them trotted out at regular points in the movie, and almost as if they qualify as their own action beats. Jackson is seriously wasted here, and not in a good, been-to-Amsterdam-for-some-of-them-chocolate-brownies kind of way either. When they’re together, Reynolds and Jackson spar like an old married couple, an old tired married couple who can no longer stand each other. Oldman grabs his pay cheque with both hands and hams it up accordingly, while the rest of the cast do their best to get through all the absurdity and nonsense with their dignity intact. 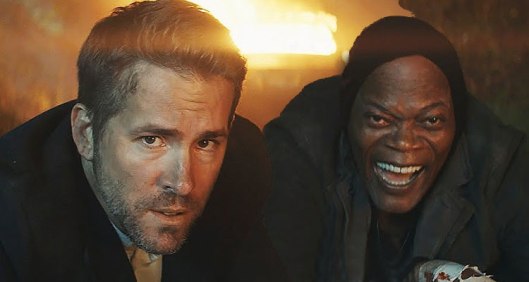 All of this indolence and protracted inertia – Bryce and Kincaid have twenty-four hours to get to the Hague but it feels like they’re taking twice as long – allied to the kind of comedy that comes pre-marked as “strained” is all the more dispiriting when you realise that O’Connor’s script was another Black List screenplay, this time from 2011. But back then it didn’t have any comedy. Instead it was a straight drama. But a few weeks before filming began, a two-week rewrite meant less drama and more comedy. And now we have the end result: a poorly assembled collection of scenes that hint constantly at what might have been. Maybe one day the movie will be remade with its original format, but until then this is all we have. It’s just that overall, it’s not enough.

Rating: 4/10 – an idea that probably looked great on paper – Reynolds! Jackson! Comedy! Action! – The Hitman’s Bodyguard translates into something that never takes full advantage of its basic premise, and chugs along quite amiably without ever doing anything to reward the viewer for their patience; with a cast that should have known better, it’s a movie that quickly fades from the memory soon after it’s watched – so it gets something right at least.