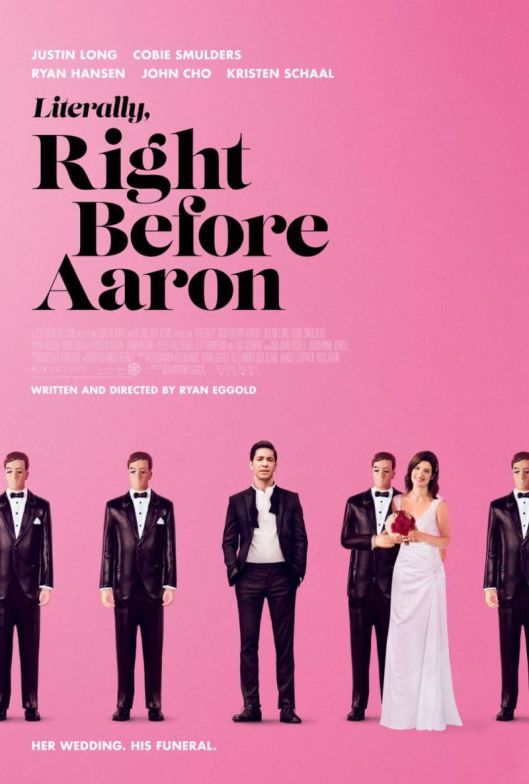 How you feel about Adam (Long), Literally, Right Before Aaron‘s main protagonist, may depend largely on your reaction to something that his ex-girlfriend, Allison (Smulders) says as he replays their first meeting: “I can’t tell if you’re charming, or just being an asshole”. It’s a salient point, as Adam is, by and large, an asshole, another of cinema’s eternal losers, the guy who not only loses the girl but also loses a big part of his identity as well. He behaves inappropriately at times, is ignored and/or put upon by others, and has at least one friend (Cho) who isn’t afraid to point out the obvious: that he’s an asshole and one of [life’s] eternal losers. He’s a hard character to like, and to spend time with, and despite several attempts by writer/director Eggold, it’s hard to feel any sympathy for him. He’s the author of his own downfall on too many occasions, and seems intent on making the same mistakes over and over.

In terms of the movie, Adam’s first big mistake is to accept Allison’s invitation to her upcoming wedding to Aaron (Hansen), literally the next guy she dated after breaking up with Adam. Adam is naturally conflicted. It’s been eighteen months since he and Allison split up, and though he has a new girlfriend, Julie (Heelan), he still loves Allison and still wants to be with her. He accepts the invitation in the hope of getting her to change her mind and start over, but his own indecision and social awkwardness keeps him from making any kind of impassioned plea that might do the job. He gets to spend a little time with Allison, reminisces about all the fun times they had, and then does nothing. Heartsick, and doomed to witness Allison and Aaron get married, Adam does allow his friend to provide him with a plus one, dollmaker Talula (Schaal), but the wedding goes ahead as planned. It’s not until the reception and a combination of too much alcohol and being desperate that Adam decides to do anything at all…

Eggold is returning to the characters and milieu he first created through an award-winning short movie of the same name that was released in 2011. Like so many features expanded from an original short movie, Literally, Right Before Aaron suffers from a surfeit of extraneous scenes – Adam runs into an old college friend (Barrett) at the library and feigns knowledge of Allison and what’s she’s up to, and then does the same with his mother (Thompson), literally two scenes later – and loses some of the impact that a shorter running time requires. And instead of exploring the characters and their motivations in greater detail, Eggold the writer paints them in broad strokes and has them repeat the same actions or mistakes over and over. One question is likely to be at the forefront of viewers’ minds right from the start – why did Adam and Allison split up after eight years together? – but when it is finally addressed, the answer is conveniently interrupted. It’s important to know because it’s Allison’s wish that they remain friends; but why if they broke up, and as it appears from the opening scene, they haven’t seen each other since they split up.

Adam’s misplaced sense of relationship masochism sends him to the wedding, and while that’s understandable as an urge to try and restore things to happier times – Adam is often asked if he’s happy, and mostly because he doesn’t look it – once there Eggold has no choice but to make things even more difficult for Adam, and whether it’s a credulous hotel clerk (Cheena), or the all-encompassing charisma of Aaron himself, Adam is left trailing in everyone’s wake, invisible or simply not worth acknowledging. And strangely, Adam is made an accomplice to all this, his weak-natured sense of self respect leading him into awkward situations and a degree of emotional distress that he almost encourages by remaining silent. It’s not until the reception and several drinks that Adam takes courage from a piece of graffiti – Carpe diem – and finds the wherewithal to confront Allison over the cause of their break up. And though by then you might still be interested in hearing her answer, it really doesn’t matter because you’ll have decided, rightly, that it was because Adam was just “being an asshole”.

As the beleaguered Adam, Long copes well with the demands of a character who is inherently obtuse, and his innate likeability as an actor goes some way to offsetting Adam’s emotional stubbornness, but he’s unable to overcome Eggold’s insistence that the character remain churlish and insipid (a difficult combination to pull off at the best of times) right up until almost the very end. With Adam being the primary focus – he’s in nearly every scene – Allison is reduced to a secondary character, the deus ex machina that drives the story forward but Eggold doesn’t make her involvement or her situation as vital, even though her motivations should be more integral to the story. Smulders has only one scene in which to shine, but thanks to Eggold’s limitations as a writer, even then she’s given far too little to work with. The rest of the cast provide solid if unremarkable performances, with the likes of Delany, Thompson, and Guzmán making what amount to cameo appearances.

As well as wearing a director and a screenwriter’s hat, Eggold also co-produces and edits the movie, and contributes to the score alongside David Goldman, and though it’s admirable that he’s taken on all these roles, it’s tempting to feel that maybe he’s taken on more than he can adequately deal with. As a writer, he’s not as focused or as insightful as he could have been, though as a director he’s on much firmer ground, guiding the story in a simple, immediate fashion that doesn’t rely on directorial frills or fancy camera work to show off what he’s capable of. It’s an approach that suits the material as well. As an editor though, Eggold doesn’t always know when it’s right to cut from one character to another in a scene, and there are times – mostly during the reception sequences – where it’s hard to tell if an issue is due to the editing or the continuity. For the most part the movie is appealing to watch thanks to Seamus Tierney’s cinematography, and San Francisco is exploited to good effect, but overall this is a movie that, like it’s central character, is “a little rough around the edges”, but not enough to make it more successful.

Rating: 5/10 – a comedy that’s only sporadically funny, and a drama that’s only sporadically dramatic, Literally, Right Before Aaron is a mixed bag thanks to its having a main character who’s hard to engage with; there are flashes of what could have been, and some of the minor characters make it more enjoyable, but Eggold’s feature debut also consists of too much padding to be truly effective.