Sometimes, and even in the best of movies, characters will do or say something that makes the viewer take a breath before uttering that immortal phrase, “What the hell?” (or some similar version). It might be something that’s out of character, or that doesn’t make any sense, or both, but it’s something that always takes the viewer out of the moment and leaves them wondering, “what idiot came up with that idea?” There’s such a moment in The Mountain Between Us, an adaptation of the novel by Charles Martin, that sees Idris Elba’s moody neurosurgeon Ben Bass, and Kate Winslet’s overly inquisitive photo-journalist Alex Martin, stranded in the High Uintas Wilderness (in Utah) after their charter plane crashes there. It would be unfair to mention this moment in detail, but any prospective viewer will know it when they see it. The problem with this moment in particular is that once it happens, the movie – already teetering on the brink of credibility – decides not to bother anymore and appropriately given Ben and Alex’s predicament, it’s all downhill from there.

Ostensibly a survival thriller, The Mountain Between Us isn’t content with being one type of movie: it wants to be a romantic drama as well. This would be all well and good if both approaches worked well together, but in the hands of director Hany Abu-Assad, and writers Chris Weitz and J. Mills Goodloe, the movie begins well enough with a well conceived and executed plane crash, and places its two main characters in a great deal of jeopardy, but then settles down to ensure that they become attracted to each other, and that their reliance on each other in order to survive becomes something greater. Yes, love is the order of the day, and is as clearly signposted as the various trials and tribulations they’ll face on their trek out of the wilderness. What this romantic development means though, is that the movie can’t decide which is more important in terms of the narrative: finding safety, or falling in love (and not into a frozen lake as Alex does).

This uncertainty leads to the movie feeling schizophrenic at times, as it develops a tendency to focus on the relationship/burgeoning love affair storyline for a while, before remembering it’s also a survival thriller and focusing on that before remembering again that it’s a romantic drama. As a result of this narrative to-ing and fro-ing, the movie never settles into a consistent groove, and as noted above, it loses its way once a certain point is reached, and from there it consequently loses traction. What could have been a tense, enthralling tale of two strangers learning how to survive against perilous odds, and using their combined wits and ingenuity to make it out of the wilderness alive (if not exactly in one piece: Ben has broken ribs, Alex has a leg injury), is left unrealised thanks to the romantic angle. And what could have been an emotive, touching love story borne out of an unexpected mutual attraction is made unlikely and annoying by the conventions used to tell said story.

As the movie unfolds it becomes obvious that the romance between Ben and Alex is more important to the overall story than whether or not they survive (though the outcome is entirely predictable). This means there are plenty of those odd, awkward moments that only seem to occur in the movies where characters remain reticent and hold back their emotions for no other reason than that the script needs them to, and misunderstanding is piled on top of further misunderstanding as the same script keeps both characters from openly declaring their love for each other until the very end. Someone, somewhere, has decided that this makes for good viewing. Someone, somewhere, needs to know this isn’t true. And if you’re a viewer watching this kind of thing drag itself out, you’ll be annoyed and frustrated and want to yell things like, “Kiss her/him already!” or “Just get on with it!” Ben and Alex do exactly this, andthe script can’t find adequate reasons for them to be so afraid of talking openly to each other. 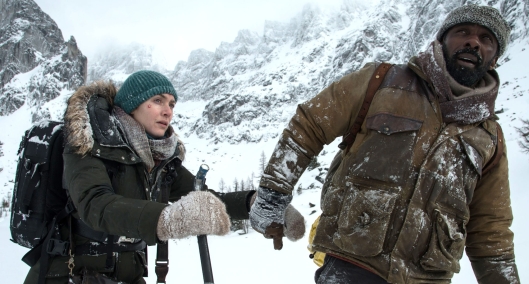 Fortunately, and though the characters are somewhat insipid and stereotypical, they’re played by Idris Elba and Kate Winslet, two of the best actors working today. Doing their best to compensate for the vagaries of the script, the pair make Ben and Alex more sympathetic than they perhaps have any right to be, and though their inevitable coming together is less than convincing, they at least make it less dispiriting than it could have been. Elba uses his familiar taciturn demeanour to good effect throughout, while Winslet always seems to be thinking about what her character is doing and why. True, she looks puzzled more often than not, but it’s in keeping with the way that Alex views things and tries to make sense of them. Together they share a definite chemistry; it’s just a shame that the script and Abu-Assad’s direction can’t provide a suitable scenario for them to build on more effectively. And there aren’t many actors who could take the last couple of scenes in the movie and make them work as well as Elba and Winslet – and that’s no mean feat.

Alas, the movie is further undermined by its refusal to put Ben and Alex in anything truly like harm’s way. Problems arise and are quickly overcome, whether it’s Ben’s broken ribs (which don’t seem to slow him down at all) or Alex’s injured leg (she proves equally adept at getting about despite the pain she’s in), or a cougar looking for an easy lunch, or the aforementioned dip in the frozen lake that Alex enjoys: none of these problems pose much of a realistic threat, or give any indication that they might stop Ben and Alex from reaching civilisation. With any and all peril removed so easily and consistently, the movie loses any sense of urgency it might have been able to assemble, and Abu-Assad’s flaccid direction ensures that any thrills to be had are left behind with the plane crash. That said, the Canadian locations have been beautifully photographed by DoP Mandy Walker, displaying their snowy peaks and valleys to often striking effect, and emphasising the vastness of the wilderness Ben and Alex are stranded in. Sadly, it’s really only these aspects of the production that Abu-Assad and his team have managed to get completely right, leaving a movie that’s good in some places, but (mostly) not in others.

Rating: 5/10 – Elba and Winslet are the main draw here, an acting dream team who can only do so much against a script that lacks conviction and somewhat counter-intuitively at times, a clear purpose; another of the many missed opportunities that 2017 has seen fit to put in front of us, The Mountain Between Us just doesn’t register strongly enough to make much of an impact, and comes perilously close at times to wasting the talents of both its stars, something that should be regarded as unforgivable.