The movie that really kickstarted Jackie Chan’s career, Snake in the Eagle’s Shadow is a compendium of established martial arts stylings with added humour that remains as fresh today as it was forty years ago. Which, on the face of it, seems unlikely, as the story is so conventional that the average viewer could work out what’s going to happen even if they’ve never seen a Hong Kong martial arts movie before. There are two rival clans, one that uses the Eagle Claw style of fighting, and one that uses the Snake style. The leader of the Eagle Claw clan, Lord Sheng Kuan (Hwang), has sworn to kill each and every member of the Snake clan, and is on the trail of one of the last surviving masters of said clan, Pai Cheng-Tien (Yuen). Fleeing Kuan, Pai ends up in a small town where he befriends Chien Fu (Chan), a janitor at a kung fu school who is mistreated by his masters. Pai teaches Chien how to defend himself using the Snake style of fighting, and Chien proves a fast learner… which proves to be a huge benefit when Kuan makes his presence known in the town.

The master and the pupil is a popular storyline in martial arts movies, and here it’s the source of much of the humour, as Pai uses a variety of (often) humiliating techniques to help Chien learn faster. The rival clans, necessarily good and bad, are another staple, and proud fighters squaring off against each other with determined faces is yet another, but though the movie provides enough familiarity to keep audiences reassured that they’ll have a good time, what it does so much more effectively is in depicting each individual fight scene in a way that makes each one seem fresh and unforced. With so many fight scenes crammed in to what is a relatively short running time, there’s the likelihood that they’ll all merge into one by the end, but the choreography is so expertly done, and so focused on showing the technique involved as well as the speed and the precision, that much of what is shown is breathtaking in both its simplicity and its impact (and it’s the only movie where you’ll see Jackie Chan kill someone with a groin strike). The only disappointment comes with the final showdown between Chien and Kuan, a sequence that suffers from some very choppy editing, and which lacks the flow of earlier encounters. 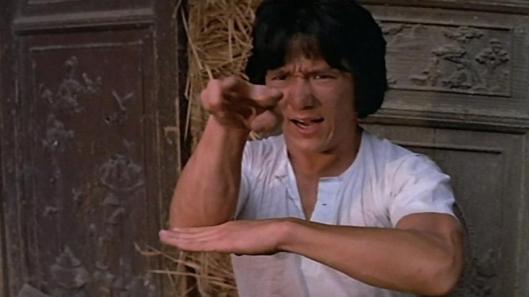 Away from the action there’s mileage to be had from Shek’s turn as the abusive Teacher Li, a character so rotten you wish for a better comeuppance than he receives (though he is part of a marvellous piece of physical slapstick with Chan that is one of the movie’s several highlights), and an equally enjoyable turn by Yuen (the director’s father) as the impish and badly be-wigged Grandmaster Pai. Hwang proves to be a smooth and likeable villain (for a change), even though his obsession with killing the Snake clan is a little genocidal, and the presence of Horan as a sword-wielding Russian masquerading as a priest adds an extra dimension to the fighting styles on show. But this is Chan’s breakthrough role, and the movie trains its focus on him at every turn, capturing every knowing smile and perplexed expression. You can argue that in his early movies Chan wasn’t really required to “act” because his physical presence and abilities were more important, but it’s clear that he’s aware of his limitations. This helps him give an enjoyable, spirited performance, and one that remains as entertaining now as it was then.

Rating: 8/10 – the debut feature of Yuen Woo-Ping, Snake in the Eagle’s Shadow is a martial arts movie that overcomes its prosaic storyline and simple plotting to provide a hugely satisfying experience; with intricate, complex fight choreography and very basic (and amusing) sound effects to accompany every blow, this is Cat’s Claws above the majority of Hong Kong martial arts movies made at the time, and a bona fide classic of the genre.