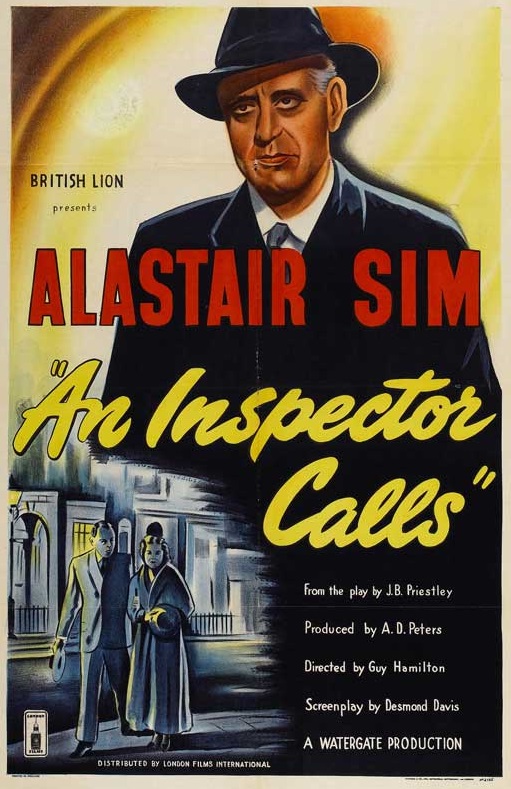 For the Birlings, a prosperous middle-class family living in the Yorkshire town of Brumley, an evening celebrating the engagement of their daughter, Sheila (Moore), to Gerald Croft (Worth), the son of one of Mr Birling’s competitors (Birling is a successful mill owner), is interrupted by the appearance of a police inspector named Poole (Sim). Poole is there to make enquiries relating to the death of a young woman at the local infirmary. Poole reveals that the young woman, Eva Smith (Wenham), appears to have committed suicide, and that she left behind a diary which mentions her connection to Mr Birling at least. At first, no one in the family – or Croft – admits to having known her, but as Poole relates her story over the last two years, it soon becomes clear that each one of them has had an effect on the direction the young woman’s life has taken, and that they may ultimately share a combined responsibility for her death. But a chance enounter reveals a truth about the inspector that none of them could have been prepared for…

The first screen adaptation of J.B. Priestley’s stage play, An Inspector Calls is a movie with a sense of political and social purpose. Set in 1912, it acts as a critique of post-Victorian middle-class hypocrisy, and in its own measured way, paints a searing portrait of the innate superiority that the middle-classes felt they were entitled to feel when dealing with the working-classes. Birling fires Eva from his mill because she was asking for better wages; he takes offence because he already feels he’s doing more than enough for his workers. Croft meets her at a low-point in her life, but his good deeds lead to her being set up as a mistress, and exploited accordingly. And at another point, when Eva is in dire need of help, Mrs Birling’s chairmanship of the local committee for financial aid, allows her to pour scorn on Eva’s request because she won’t reveal certain details of her situation out of pride. Desmond Davis’ screenplay highlights the self-satisfied, arrogant nature of the older Birlings, entrenched in their views and unwilling to accept responsibility for the consequences of their actions, while Priestley’s own socialist message is reflected in the younger Birlings’ ability to see why concern for others should be a necessary part of repaying earned privilege.

As Eva’s story plays out, and the scale of one family’s involvement in her tragic death is revealed, Davis and director Guy Hamilton tighten the emotional screws, and strip away the pretence and denial avowed by Croft and the Birlings until, as Sheila states, they’re all different people thanks to the inspector’s arrival. Sim is excellent as the gentle yet forceful Poole, his often mournful expression reflecting not just the sad fate of one young woman, but the inability of the older Birlings to admit their culpability. Lindo and Young deliver performances full of arrogance and bluster, while Moore is suitably anguished as the one person who can see why Poole’s presence is so meaningful for them all. Worth is a little stiff at times, but Forbes shines as Eric, the son whose drinking problem can’t be acknowledged by his mother because of how it will reflect on her. In many ways, the movie is a classic “drawing-room drama”, but spiked with an element of mystery. It draws in the viewer confidently and with a clear understanding of the story’s themes and values, and deftly skewers the institutional glibness and bigotry of the period. And by the time it reveals the hidden twist in its tale, its deconstruction of moral lassitude is complete.

Rating: 9/10 – a perfectly judged exploration of the class divide existing in pre-World War I Britain, An Inspector Calls offers an unassuming yet powerful dissection of that period’s social inequality; Sim has rarely been better, Hamilton’s direction is precise and uncompromising, and as theatrical adaptations go, it’s in a league of its own.

NOTE: Sadly, there’s no trailer available for An Inspector Calls.