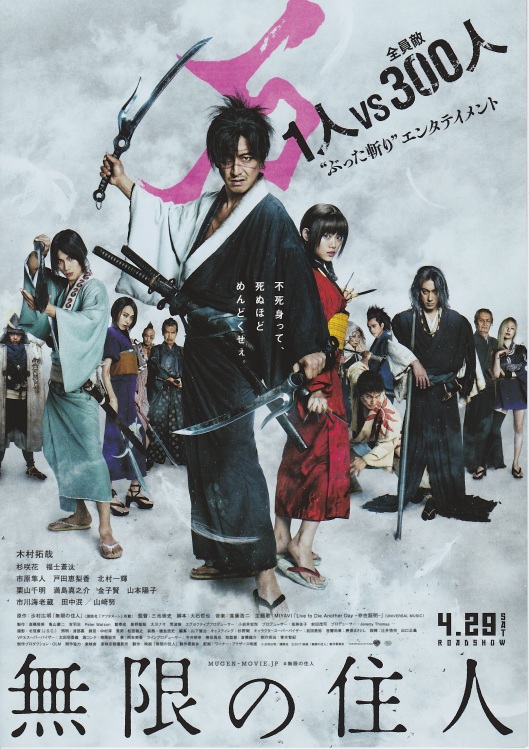 Manji (Kimura) is a man haunted by a tragic past involving the death of his sister, an incident that left him unable to die thanks to the intervention of a mysterious woman (Yamamoto). Fifty-two years later, a young girl, Rin (Sugisaki), approaches him to be her bodyguard and help gain revenge for the death of her father at the hands of Kagehisa Anotsu (Fukushi), the head of a new martial arts school. Manji refuses at first, but when Rin is attacked by one of Kagehisa’s men, he changes his mind. When news reaches Kagehisa that his man is dead, so begins a series of encounters as Kagehisa’s followers – aware that Manji cannot be killed – try various ways and means to defeat him. Meanwhile, Kagehisa attempts to influence the Shogun training school into joining his own school, but his plan fails. As Manji’s body suffers more and more from each encounter, circumstances bring him and Kagehisa together against an army of Shogun warriors, and if fate has a hand, then against each other…

Blade of the Immortal is Takashi Miike’s one hundredth movie, a feat that he’s achieved since his debut in 1991 (and he’s made two further movies since). Returning to the samurai arena he visited so effectively in 13 Assassins (2010), Takashi takes on another manga/anime adaptation and throws the audience headlong into a world of treachery, violence, political intrigue, vengeance, and misplaced codes of honour. As expected, it’s a bravura piece of movie making from Takashi, visually striking – the opening sequence is in black and white – bold in its execution with several stunningly mounted action set pieces, and a central character in Manji whose plight is weighing him down with every passing year. There’s a melancholy air to Manji’s situation that the script by Oishi Tetsuya maintains throughout, imbuing the character with a fatalism that gives depth to the part and helps ensure Manji isn’t just another invincible hero. Kimura is terrific in the role, Manji’s scarred features reflecting the pain of being immortal, and his interaction with Rin (who is a dead ringer for his sister; as she should be, as Sugisaki plays both roles) offering him both unexpected hope and potential redemption. 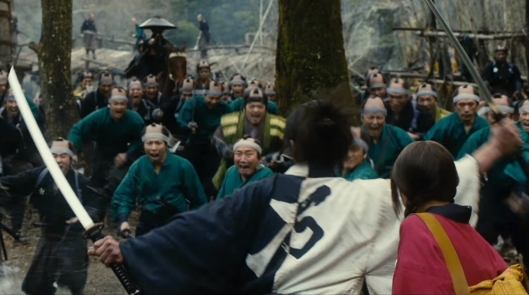 These themes play out against the kind of feudal backdrop that we’ve all become familiar with, and it’s these elements that don’t have the effect they should have. Kagehiso’s plan to appropriate all the teaching schools under one banner (and leader) never quite grips as a villainous ambition, though the personal reasons for his actions revealed later in the movie almost make it more convincing. The middle section of the movie suffers accordingly, as Kagehiso’s machinations and an unlikely alliance between Manji and members of a school who’ve yet to be assimilated stretch out the running time unnecessarily. Thankfully there’s a handful of superbly choreographed action scenes to offset what feels like too much filler, particularly in terms of the various examples of exotic weaponry on display, and the endlessly roving camerawork of Kita Nobuyasu. The performances are uniformly good as well, the quality of the characterisations allowing the likes of Sugisaki, Fukushi, Tanaka (as a duplicitous advisor to Kagehisa), and Toda (as a repentant member of Kagehisa’s clan) to add layers to their roles that might not otherwise have been possible. But at the end of the day it’s Takashi’s movie, and while this may be one of his more accessible movies, it’s clear that the enfant terrible of Japanese cinema is showing no sign of slowing down or avoiding challenges.

Rating: 7/10 – though Takashi’s propensity for extreme violence is dialled down, there’s still more than enough bloodshed on display in Blade of the Immortal to keep long-time fans, and newer viewers, happy; bold and thrilling (for the most part), this is stirring stuff supported by strong characterisations and a knowing sense of how outlandish it all is.