aka The Forest of the Lost Souls

A young woman (Lopes) travels to a remote area of forest that’s a favourite destination for people looking to commit suicide. She comes to a lake and takes a dose of poison. Wading out into the water she waits for the poison to take effect. When it does she collapses into the water. Some time later, an old man, Ricardo (Mota), also comes to the forest. There he meets a young woman, Carolina (Love); both are there (ostensibly) for the same reason: to take their own lives. Ricardo is there because he believes himself to be a failure as a father and a husband. Carolina is fearful of getting old and suffering the ill effects that old age brings. They venture deeper into the forest, and talk about their reasons for being there, and the lies they’ve told in order to be there without raising any suspicions amongst their friends and families. When Ricardo asks Carolina if she knows where the lake is, it leads to a turn of events that suggests their meeting wasn’t entirely accidental… 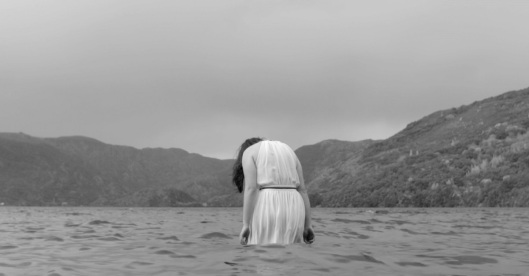 The first feature from writer/producer/director Lopes, The Forest of Lost Souls is a darkly disturbing psychological horror movie that spins its own version of Japan’s Aokigahara Forest, and in doing so depicts an unexpectedly grim portrait of extreme personal need. The poster sadly gives away something of the dynamic between Carolina and Ricardo, and acts as a warning as to where the movie is heading once they meet, but even with that marketing mis-step, Lopes does more than enough with his stripped back narrative to ensure that viewers will be wondering if Carolina’s “secret” will be matched or exceeded by Ricardo’s. As they challenge each other’s views and feelings on the mistakes they’ve made that have led them there, the pair spar in ways that hint at deeper motivations lurking beneath the pain that Ricardo is experiencing, and the jaunty cockiness that Carolina expresses (it’s not her first time in the forest, and she’s quick to point out the pros and cons of committing suicide if you’re not fully prepared to die). As they venture nearer to the lake, and a friendship of sorts develops between them, Lopes adroitly holds back from revealing which one of them might leave the forest alive. And then…

Well, and then the movie takes a left turn into vastly different, and yet completely related territory (there are hints of this in the trailer, but thankfully they’re not too blatant). Leaving behind the solitary, isolated forest with its occasionally discovered corpses, Lopes takes the movie and one of its two central characters off in a new direction, and cleverly links past and present through the use of a mobile phone and a sense of dread that’s borne out of knowing what must come next. As Lopes allows these scenes to play out in an unsettling and matter-of-fact manner, there’s the temptation to feel that this new direction is an unnecessary transition from the realm of psychological horror into more predictable slasher territory, but Lopes has a further trick up his sleeve, and connects the two halves of his movie with a coda that explains a great deal of what’s happened, and which does so in a way that wraps things up neatly and with a great deal of confidence and skill. It’s all enhanced by Francisco Lobo’s often beautiful widescreen compositions, with their sense of space and detachment, and the characters seemingly lost amidst the wider, wilder landscape.

Rating: 8/10 – for once, a movie’s brevity is a positive, as The Forest of Lost Souls and its deliberate pacing provide rich dividends for the viewer prepared to see it to the end; brutal in places but not gratuitously so, it’s a movie that is spare and unflinching when it needs to be, and is possibly the only psychological horror outing to name drop Nick Hornby not once but twice.