It’s Halloween 1934, and glamorous socialite Honey (Eve) is hosting her annual Halloween costume party. But this year’s event is tinged with bitterness and revenge, for on the same night the year before, Honey’s husband was killed, and the killer never caught. Tonight, Honey has invited everyone who was there the year before on the assumption that one of her guests was the murderer. Enlisting the help of newly appointed police Inspector Shoerope (Scolding), Honey is determined to uncover the killer’s identity, and see justice done. With the party well under way, Shoerope begins his investigation and soon finds that there a number of possible suspects, from local real estate broker Mr Conick (McGuire), to German businessman Herr Werner (Taubman), and even Shoerope’s own Commissioner (Eve). Matters are further complicated when it’s suggested by one of the guests that Honey isn’t being as honest with Shoerope as she seems, raising the possibility that his investigation is a means to a far different end than justice. But as the evening continues, various clues fall into place, and Shoerope discovers that there’s more to the murder of Honey’s husband than either of them could have imagined… 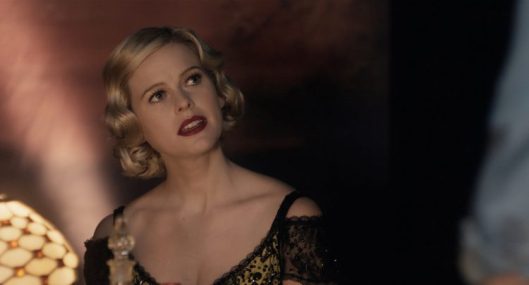 Something of a family affair – Alice and Jack Eve are siblings, while Trevor Eve is their father – Bees Make Honey is a period murder mystery comedy-drama that flirts with a lot of ideas as to how to present its story visually, and then decides to include them all. And so we have a movie that throws in all manner of cinematic trickery as if someone has opened a Pandora’s Box of visual effects (leaving Hope cowering at the bottom). When a movie is this visually erratic, it’s too often a sign that the material isn’t as lively as the makers have intended, and for long stretches, this is the case with Jack Eve’s honest yet overwrought pastiche of Thirties drawing room mysteries. A huge – and this is no understatement – part of the problem is the dialogue, which is meant to be clever and dazzlingly erudite, but which causes further problems for many of the cast, lumbered as they are with lines such as, “But one can never repeat the past with complete sincerity. There’s is always the possibility, if not inevitability, of a fleeting fancy throwing a spanner in the works.” 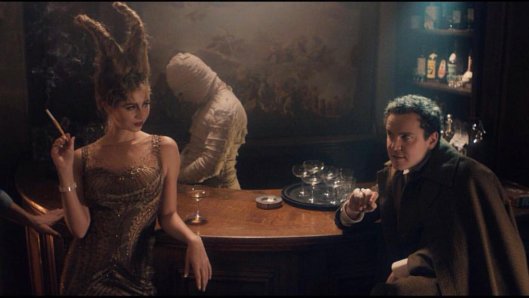 There’s also an anachronistic use of music, with the likes of The Libertines’ What a Waster, and The Clash’s Lover’s Rock littering the soundtrack as literal counterpoints to the action, but all these incidences do is to jar the viewer out of whatever temporary mood the material has just got them into. With such a lack of focus, it’s a shame also that any mystery is undermined by a massive visual clue given away when the murder is committed at the movie’s beginning. These and other directorial decisions made by Eve make the movie a stop-start affair that never really gels or fully entertains as the high-spirited romp it could (and should) have been, and viewers may find themselves hitting the fast-forward button more than they’d like. The cast are game, however, and muddle through in support of their director, though Trevor Eve is clearly having fun with a role he wouldn’t normally be asked to play. By the end, a kind of weary acceptance sets in, allied to the knowledge that the movie isn’t going to raise its game any higher. There’s a good idea in there somewhere, but this sort of murder mystery has been done too often before, and to much better effect.

Rating: 4/10 – when a movie tries to make an apple-bobbing competition one of its highlights, you know there’s a problem, and in this respect, it’s one of many that hamper Bees Make Honey from being a success;  one to approach with caution, it’s a movie that never settles on a through line, or maintains a consistent tone – unless not maintaining one was the original idea.