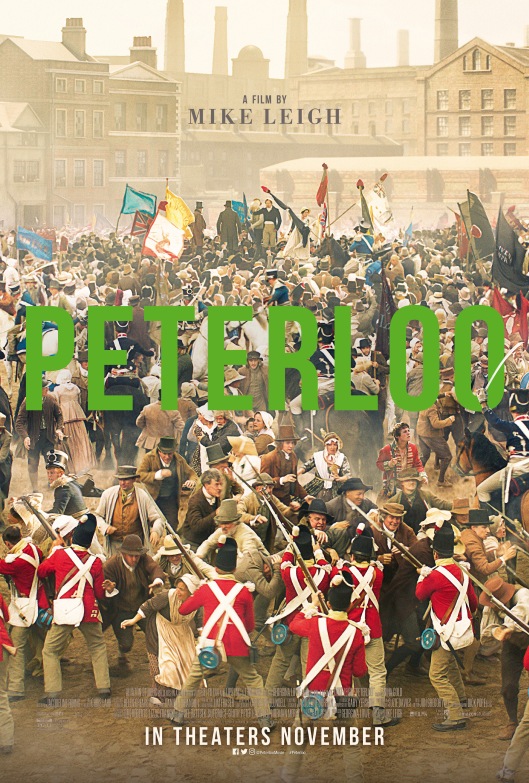 In the wake of Napoléon Bonaparte’s defeat on the Continent in 1815, the working classes in the north of England turn their attention to protesting against the lack of fair political representation, and asking for extended voting rights (one vote per household). Getting wind of this, and viewing it as impending sedition, the British Government – as represented by the Home Secretary, Lord Sidmouth (Johnson) – decides to do all it can to ensure that this new movement is unsuccessful, and preferably crushed before it can begin. While local radicals from the Manchester Observer, including its founder, Joseph Johnson (Gill), organise a great assembly to take place at St Peter’s Fields in Manchester on 9 August 1819, with a speech to be delivered by the great reformist orator Henry Hunt (Kinnear), government spies and local magistrates plot to have Hunt arrested and the crowd dispersed by force if necessary. With a crowd of around 60,000 people attending, the local militia’s attempts to break up the gathering lead to a terrible tragedy… 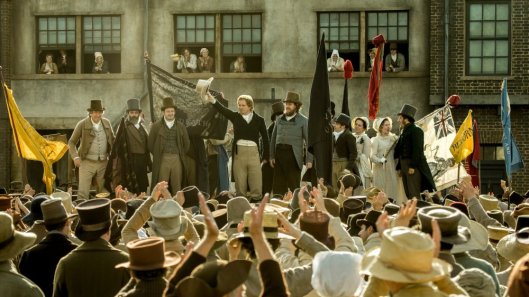 Beginning on the battlefield in 1815, Mike Leigh’s latest movie features several firsts for the director in terms of action and bloodshed, but Peterloo is also his most fiercely political movie to date. In telling the story of one of Britain’s worst tragedies, Leigh takes us on a vital history lesson, ranging from the semi-rural mill towns of Lancashire and their inhabitants’ clamour for fair political representation, to the richly decorated rooms of the Establishment and their unwillingness to ease the yoke of political oppression, to the austere courtrooms of the local magistrates and their callous disregard for the lives of the working class. In meeting rooms and at outdoor venues, Leigh explores and illuminates the political and social climate of the period, and through the use of lengthy speeches and extended conversations, brings to life a time when liberty was a luxury afforded only to the ruling elite, and the working classes were so beaten down they were constantly in danger of dying from starvation and disease. Leigh brings all this to life, and gives powerful voice to both the ideals of the radicals and their supporters, and the arrogance of the Establishment. By the time the massacre gets under way, the audience knows exactly what is being fought for (albeit peacefully), and why it matters. And why the elite are so determined to impede any progress.

If all this sounds irredeemably dry and didactic, then nothing could be further from the truth. Like Eric Rohmer, whose movies often consist of just two people talking at length but which are still fascinating to watch, Leigh has the same ability to draw in the viewer and make the expression of ideas as compelling as the action that inevitably follows in their wake (though if anything, the massacre itself isn’t as well realised as the rest of the movie, and carries a strangely muted impact, as if Leigh didn’t want to go too far in depicting the violence). There are real emotions on display, however, from the peacock-ish pride of Henry Hunt, to the cautious reticence of Peake’s unconvinced wife and mother, to the fervour and enthusiasm of the leaders of the nascent Manchester Female Reform Society, to the priggish belligerence of the Prince Consort (McInnerny). In this, the cast are uniformly excellent, with special mention going to Bell as radical reformer Samuel Bamford, and Franklin as the vituperative, apoplectic Magistrate Rev Etlhelson. With expressive, beautifully composed cinematography by Dick Pope that further brings the period to life, along with Suzie Davies’ highly impressive production design, this is a gripping account of a despicable act of state-organised domestic terrorism.

Rating: 9/10 – not for all tastes, but a compelling and revealing look at a key moment in 19th century British history nevertheless, Peterloo sees Mike Leigh working at the height of his considerable story-telling powers; absorbing, intelligently handled, and brimming with vitality, this does border on being unashamedly polemical at times, but when the quality of the material is this good, it’s something that can be easily forgiven.