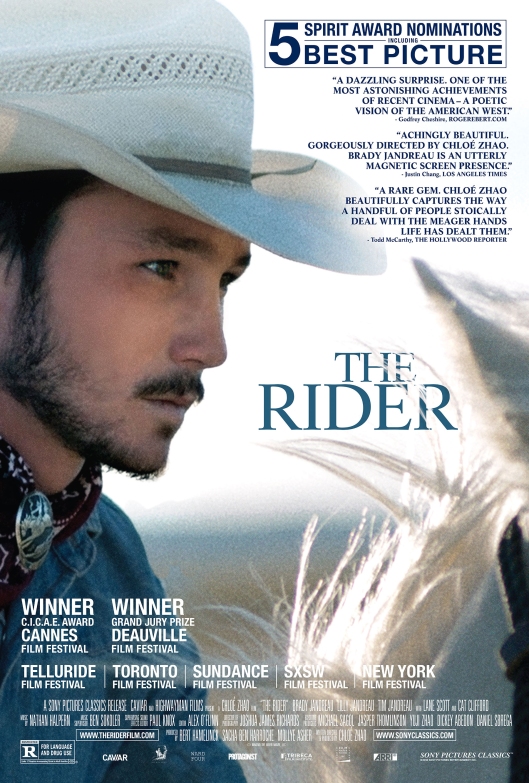 Following an accident at a bull riding event, Brady Blackburn (Brady Jandreau) has a metal plate in his head and recurring moments when the motor function in his right hand seizes up. Living with his father, Wayne (Tim Jandreau), and younger sister, Lilly (Jandreau), who has autism, Brady knows he has to take it easy, and that a return to the rodeo circuit isn’t going to happen any time soon, but being a cowboy is the only thing he knows how to do. His friends all seem to think his return to bull riding is a foregone conclusion, and Brady hopes they’re right, but as time goes on, and his motor seizures don’t improve, he takes to breaking in wild horses instead. Inevitably, Brady starts to ride again, but this proves to be a problem as well, and he collapses while out on a horse he’s bought after breaking it in. Still wanting to live the life he wants to lead, and on his terms (and despite medical advice and his father’s counsel), Brady decides to enter the next rodeo event, and return to doing the one thing he’s good at…

In her follow up to Songs My Brothers Taught Me (2015), writer/director Chloé Zhao returns to the Pine Ridge Indian Reservation in South Dakota (and some of the same non-professional actors she used before), and again uses real life incidents – Jandreau suffered the head injury depicted in the movie – as the basis for a story that examines and explores what it’s like to have your livelihood taken away from you when your personal situation is already pretty bleak. Brady and his family live on the edge of poverty, with his father wasting much of his wages on gambling and alcohol, and along with many others on the reservation, opportunities that would enable Brady to start again are slim to non-existent. Having nothing else that can motivate him as much, Brady clings on to the idea that he can continue to be a cowboy, but he’s somehow forgotten that being a cowboy isn’t just about staying on a bull for eight seconds, it’s a way of life – and he’s already living it. Zhao highlights Brady’s pride and resilience, and his determination to resume the life he’s used to, but she also shows how this isn’t as good for him as he thinks. Sometimes, Zhao makes clear, letting go of our dreams is better for us than trying to live them.

Once again, Zhao uses the backdrop of the South Dakota Badlands to reflect the mood and tone of the material, its sprawling vistas and huge skies providing a sense of freedom that can’t be achieved through the characters’ daily lives. And once again the movie is beautifully photographed by DoP Joshua James Richards, his trenchant eye for intimate compositions amidst the rolling hills and grassy plains offering an elegiac feel to the narrative, and underlining the mythology of the cowboy. There’s sadness and pessimism here, and disillusionment too, but there’s also hope, and in the unlikeliest of places, such as the brain-damaged form of Brady’s friend, Lane (Scott), and the relationships Brady is able to form with horses. As with Songs…, Zhao focuses on the good things in her main characters’ life, the things that truly matter, but which we often don’t recognise, or worse, take for granted. She’s rewarded (again) by a number of terrific performances from her non-professional cast; the realism they bring adds to the sincerity and honesty of Brady’s story. Though necessarily downbeat because of the declining social structure of reservation life, this is ultimately an intelligent, thought-provoking, and above all, moving, portrait of an important turning point in a young man’s life.

Rating: 9/10 – directed with confidence and skill by Zhao, and offering a pensive yet richly detailed examination of a way of life that still holds meaning for many living in the American Midwest, The Rider is a beautifully realised movie about loss and hope that is simply breathtaking; simply told but with a scope that puts it in a league all its own, Zhao’s sophomore feature is an immersive, exceptional movie that, like its predecessor, shines a light on a corner of America that rarely recieves such illuminating attention.