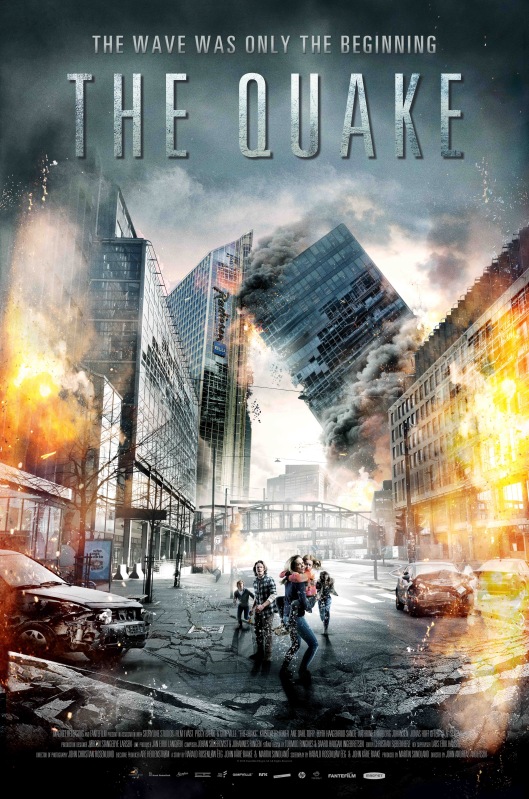 Three years after saving hundreds of lives in the tsunami disaster that struck his home town of Geiranger, geologist Kristian Elkjord (Joner) is separated from his wife and family. While he still lives in Geiranger, they have moved to the capital, Oslo. The death of a colleague, Konrad (Frisch), in what is regarded as a rare seismic shift while working in a road tunnel, prompts Kristian to investigate further. Making contact with his former boss, Johannes (Amdam), Kristian’s suspicions that the seismic shift that killed Konrad could be an indicator of a bigger problem to come, is refuted. But when Kristian discovers that Konrad has been researching the possibility of another devastating earthquake similar to the one that struck Oslo in 1904, his suspicions appear to be well founded. With the help of Konrad’s daughter, Marit (Johansen), Kristian does his best to alert his family – wife Idun (Torp), teenage son Sondre (Oftebro), and young daughter Julia (Haagenrud-Sande) – but with all three of them in various parts of the city, getting to them in time and keeping them safe becomes even more perilous when Kristian’s fears become reality…

An unexpected but welcome sequel to The Wave (2015), The Quake is pretty much the same movie but on a grander, more devastating scale. There’s the usual long build up before the titular disaster happens, and there are the usual scenes where the hero tries to convince everyone around him that he’s not crazy or alarmist or both, and there are the standard, minor precursors to the main event to help build up the tension. It’s formulaic, and for the most part entirely predictable, but thanks to an astute script – courtesy of returning writers John Kåre Raake and Harald Rosenløw-Eeg – and Andersen’s confident handling of the material, this is that rare sequel that is as as good as the original. Having the same cast back to play the Elkjord family helps too, and the decision to have Kristian estranged from them due to his suffering from debilitating survivor’s guilt, gives many of the movie’s earliest scenes more of an emotional impact. So much so, that when it comes time for Kristian to take on the mantle of rescuer, the increasing peril everyone finds themselves in is all the more effective for the viewer in that there’s no guarantee they’ll all survive.

As with the scenario in The Wave, Raake and Rosenløw-Eeg have taken a real event in Norway’s history – the 1904 earthquake referred to hit 5.4 on the Richter Scale – and then explored the current research which advocates the strong possibility of another earthquake on the same scale happening at some unguessable point in the future. This plausibility adds to the credibility of the movie, and makes the actual earthquake depicted feel as if it could actually happen (there’s a restraint too in the amount of devastation that’s caused that also feels right). Joner and Torp reprise their roles with the same integrity and commitment they brought to The Wave, and there’s strong support from the rest of the cast, though Amdam is stuck playing the kind of blinkered character you hope will end up being taken out by a collapsing building. The cinematography is suitably bleak with a subdued colour palette and often gloomy lighting, but this is in keeping with the pessimistic nature of the material. The special effects are impressive without going over the top, and the various obstacles and problems that Kristian has to overcome to keep his family safe are well crafted and well thought out. The last thirty minutes are as tense and as nerve-wracking as anything else you’re likely to see in the disaster movie genre this year, but it does make you wonder, what next for the unfortunate Elkjords?

Rating: 8/10 – with a slow start that concentrates on its characters and promoting the inevitable danger they’ll face later on, The Quake offers a number of edge-of-the-seat moments in amongst all the mayhem, and it does so with a great deal of shrewdness and self-assurance; with a surfeit of suspense, and a handful of visceral shocks, this is an object lesson to how to make a disaster movie feel realistic, and how not to lose sight of the characters once it all goes spectacularly wrong.

On the morning of 19 September 1985, the staff at an office building in Mexico City begin arriving for work. Already there is the building’s caretaker, Martin Soriano (Bonilla), who is waiting to go home having been there overnight. As he waits, the building becomes busier and busier, with cleaners and maintenance workers getting on with their tasks while people who work in the various offices arrive and chat at the beginning of their day. It’s an average Thursday, until at 7:19 am precisely, an earthquake registering 8.0 on the Richter Scale hits the seven storey building and brings it crumbling to the ground. Once the debris has settled, there are survivors, but they’re trapped beneath tons of rubble. There’s Dr Fernando Pellicer (Bichir), who’s a lawyer as well as a doctor, and who’s legs are trapped. He discovers a flashlight that’s just within reach. When he turns it on, he finds that Martin is trapped several feet away. As time passes, other survivors in other parts of the rubble make themselves known, and as they wait to be rescued, they all try to keep each other from despairing or losing hope…

In terms of its timing, this shortlisted entry for the Academy Award for Best Foreign Language Film at the 89th Academy Awards (it wasn’t selected), appears to be a movie that’s arrived at too far a remove from the original event to make much of an impact. It’s a simple, straightforward movie as well, devoid of any major special effects sequences – the earthquake itself is depicted from within the lobby of the building, and is effectively handled if brief – and focusing on Pellicer and Martin as they struggle to maintain their composure and their strength while trapped under a building that has collapsed on top of them. Anyone familiar with Oliver Stone’s World Trade Center (2006) will recognise the basic set up, as Bichir and Serrano (until very late on), are the only people we can see. We hear others, and one character has a radio that keeps everyone in touch with what’s happened and what is happening, but otherwise this is a two-man show. As the beleaguered pair, Bichir and Serrano acquit themselves well, and display mixed feelings of courage and fear that highlight the uncertainty of their situation. For them, every shudder and shift of the debris around them could mean a crushing death.

With the decision made to concentrate on Pellicer and Martin, Grau and co-scripter Alberto Chimal opt for a visual conceit post-quake to emphasise the horrible nature of their circumstances. The frame is reduced considerably, almost to an Academy ratio, as we focus closely on Pellicer. As he comes to terms with his plight, so the screen widens and expands to encompass the two men and the apparent unlikelihood of their being rescued. It’s a move designed to put the audience in the thick of things, to help them feel as helpless as the characters, but it’s also oddly distracting, a visual motif that keeps you watching for the changes in scope rather than the inevitable issues that Martin has with Pellicer. Grau switches back and forth between the two men in an unfussy, severe style that plays down the chances of any visual flourishes, and the disembodied voices, along with a number of distinct sound effects, illustrate the range of emotions felt by those who have been trapped. There’s little in the way of subtext or broader social themes, just a no frills, stripped back exploration of the will to survive against overwhelming odds in a seemingly impossible situation.

Rating: 7/10 – simply told, and with a minimum of artifice or glamour, 7:19 is a sobering, grimly effective story of quiet heroism and strength in adversity; dour for the most part – but deliberately so – this doesn’t always carry the emotional wallop that might be expected, but it is a finely tuned, true-to-life drama nevertheless.

NOTE: Alas, there isn’t a trailer with English subtitles available for 7:19.