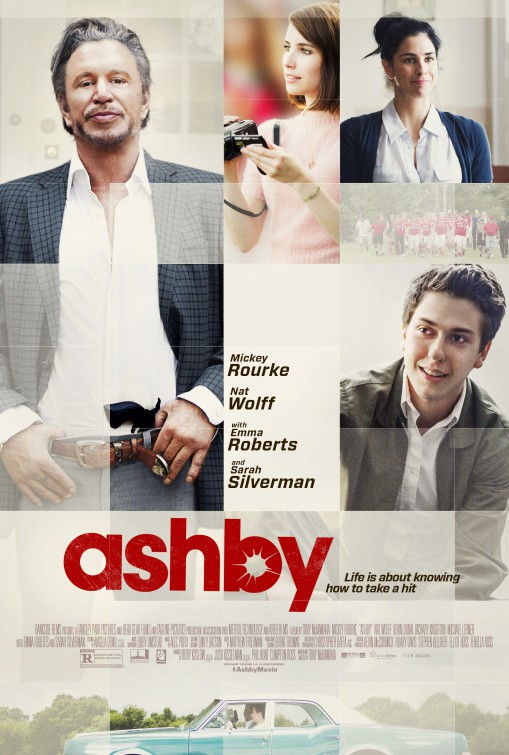 Seventeen year old Ed Wallis (Wolff) and his mother, June (Silverman), have moved into a new neighbourhood following June’s divorce from Ed’s father. Ed is a self-contained, quietly determined, well-read teenager who is struggling to make sense of his life and where it’s going. When his English teacher instructs Ed’s class to write a report about an “old person” – one they actually have to talk to – Ed decides to write his report about his neighbour, Ashby Holt (Rourke).

Unknown to Ed, Ashby has a brain tumour that has left him with only three months left to live. When Ed knocks on his door, Ashby tales advantage of the situation, and in return for talking to Ed about his life, gets him to drive Ashby around. On their first trip, Ashby tells Ed he was a napkin salesman, but later, when Ed helps Ashby through a potential seizure, he discovers that this particular “napkin salesman” has a small arsenal of weapons in his basement and a clutch of passports in different names. Despite Ed’s attempts to cover his tracks, Ashby knows what’s happened, and the next day he and Ed go for a drive where he reveals that he was actually a CIA assassin, and has killed over ninety people. When Ed asks him if he has any regrets or doubts about what he did, Ashby’s response isn’t as unequivocal as Ashby himself would have liked.

Back in high school, Ed attracts the attention of Eloise (Roberts), a student whose class project involves her studying the effect of violent collisions on the brains of the football team. Ed wants to be a part of the team, but his slight frame and nerd-like appearance doesn’t inspire much confidence, but when he reveals his talent as a wide receiver, he wins his place. Meanwhile, Ashby becomes concerned that one of the people he killed wasn’t as deserving as he believed at the time. When he looks into the man’s life and career, Ashby discovers that his bosses lied to him, and he determines to make amends before he dies, even if it means their deaths. While Ashby searches for redemption, Ed tries his best to deal with his mother’s habitual dating (and inferred one night stands), his father continually failing to visit him, his fear of being hit during a football match, and navigating the tricky waters of his relationship with Eloise. And then he learns about Ashby’s latest “mission”…

A coming-of-age tale that features a handful of winning performances, and an uneven but engaging storyline, Ashby is an independent feature that just about works thanks to the spirited commitment of its cast and the relative originality and quirkiness of the script by director McNamara, who also made the wonderful The Rage of Placid Lake (2003).

As a coming-of-age tale the movie relies heavily on making Ed a bit of a coward, and he’s whiny too, justifying his reluctant behaviour at every turn and always making excuses for the people around him, such as his father, whom he always speaks well of, even when they don’t deserve it. Ed is continually defending these people, even the jock who assaults him; he spends so much time understanding why people treat him so badly, this very “understanding” marks him out as one of Life’s perennial victims. He also complains too much when things don’t work out as he’d like them to, which leads to Ashby telling him he’s got to stop “bitchin’ like a sheep on crystal meth”. With all this, it’s a tribute to Wolff’s performance that the viewer doesn’t dislike Ed on principle, and it’s a further tribute that when things do start to go right for him, the viewer is completely on his side and urging him on.

But while Ed’s journey is paved with good intentions rarely achieved, Ashby’s is more soulful and melancholic. As he helps Ed manoeuvre the minefield that is becoming an adult, Ashby looks to put his affairs in order before he’s reunited with his wife and daughter in the afterlife (even though he knows there’s no guarantee he will be). There’s a sombre, religious and philosophical consideration here that doesn’t quite fit in with Ashby’s character as a whole, and there’s a scene where he visits the local priest (Knighton) for absolution that holds up the movie and feels out of place, mostly because this takes place during the period he’s looking to “take care” of his old bosses. That said, Rourke is on terrific form as Ashby, his usual mannered approach to a role here left off and replaced with a restrained, careful take on a character that could so easily have been a caricature if it weren’t for the combination of Rourke’s portrayal and McNamara’s writing (and for once, it looks like Rourke is really enjoying himself).

Where McNamara does stumble though is in his treatment of the secondary characters, with Roberts’ Eloise possessing the kind of confidence and self-awareness that only teenage females in the movies have, while Silverman’s love-hungry June openly admits to Ed that she likes sex in a scene that again, is only likely to happen in the movies. The writer/director also has trouble judging the length of a scene, leaving some to run on (the locker room scenes), while others feel truncated (the early scenes between Ed and his mother). But even though these problems intrude from time to time and break the movie’s rhythm, they’re not enough to ruin the mood of the piece as a whole, which finds clever ways to celebrate both the beginning of one adult life and the end of another.

First and foremost a drama, Ashby finds room for some much-needed and relishable humour, from some terrific one-liners to occasional visual gags that are as unexpected as they are hilarious, and McNamara is often on surer ground in these instances. But it’s Rourke and Wolff who make this work so well, their scenes together displaying a keen sense of timing with both actors sparking off each other to great effect. Aided by some very crisp, stylish photography from Christopher Baffa, and a succinct, gently supportive score by Alec Puro, the movie overcomes many of its failings to become a heartfelt, meditative examination of an unlikely but mutually rewarding friendship.

Rating: 7/10 – some viewers may feel that Ashby is too good-natured or lightweight to be entirely successful, but it has a likeable, winning nature that’s hard to ignore, and what it has to say it says without too much prevarication or pontificating; with Rourke giving one of his best performances for quite some time, and Wolff reminding audiences just why he’s one of the best young actors working today, the movie is a small-scale treat that would have benefitted from some judicious script editing and a more streamlined storyline, but still retains a charm all its own.