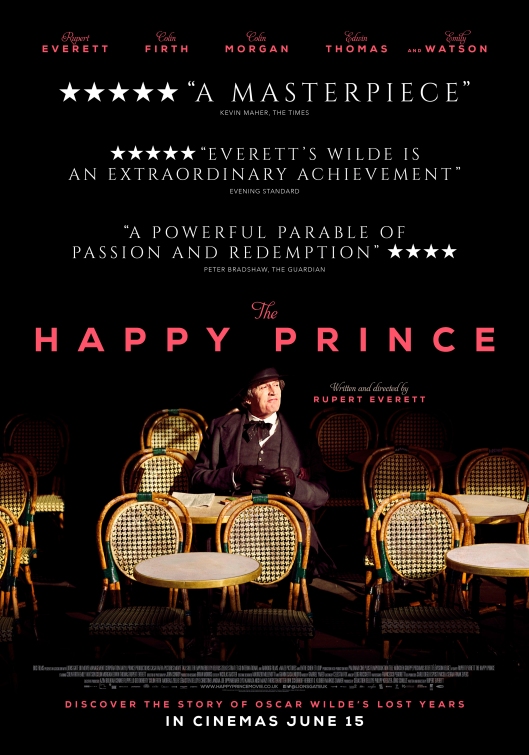 Oscar Wilde (Everett) has served his time in Reading Gaol and is living in France, supported by the kind attentions of one of his few remaining friends, Robbie Ross (Thomas). Suffering from ill health as a result of his stay in prison, Wilde is a shadow of his former self, wracked by torment and disillusionment, and his passion for writing exhausted. Against the better judgment and advice of his friends, including Reggie Turner (Firth), and his estranged wife, Constance (Watson), Wilde is reunited with the source of his downfall, Lord Alfred ‘Bosie’ Douglas (Morgan). They live together, though the relationship is strained, and Douglas’s selfish behaviour begins to drive an irreversible wedge between them. When their families each threaten to remove their financial support for the pair, the relationship founders completely, and Wilde becomes a lonely figure wandering from café to café spending what little money he has on alcohol. With his health deteriorating even further, Wilde becomes incapacitated, and is forced to see out the remainder of his days in a dingy Paris hotel room…

When actors or directors announce that their next movie will be a long cherished passion project, it’s often time to nod sagely and mutter, “that’ll be nice”. Rupert Everett had been trying to get a movie made about the final three years in the life of Oscar Wilde for over five years, and he’s finally succeeded. You can imagine the pitch to potential investors, though: a movie about an alcoholic writer in the decrepitude of his final years, and without any chance of a happy ending. Full marks then to Everett for his perseverance, because despite the downbeat nature of the material, and the sadness of seeing a once great man reduced to abject penury, The Happy Prince is a fascinating and poignant examination of the last three years of Wilde’s life, and how those years took a further, irrevocable toll on him after two years in prison. It’s a largely melancholy, subdued account, but there are moments of joy and laughter and hope in amongst the heartbreak and despair, as Wilde reflects on his success and his subsequent downfall. Unafraid to show Wilde at his worst, and with the worst happening to him, Everett presents an unflinching portrait of the artist as an old man robbed of all his powers.

The movie has all the hallmarks of a grim tragedy, from Wilde, Turner and Ross being pursued in Italy by English thugs looking to intimidate and bully a great man brought low, to the inevitability of Douglas’ rejection of Wilde when money becomes an issue. Everett is magnificent in a role that he’s often unrecognisable in, the quality of the make up obliterating the actor/director’s angular features; he’s like a poster child for rampant, self-inflicted dissolution. What Everett captures perfectly is the sense of a man who knows his life is effectively over, but who clings to it, desperately, and however he can, even if it’s inappropriate (his drinking etc.). Everett, who also wrote the script, is a confident, detailed director, and he has a good eye for composition that some more practiced directors would be envious of. He’s an unselfish actor too, allowing the likes of Morgan and Thomas to shine in roles that might otherwise have appeared to be in subservience to the orbit of Everett’s own. That the movie isn’t as heavy going as it looks is another testament to the skill with which Everett assembles the various elements of Wilde’s post-prison experiences, and the way he weaves the story of the Happy Prince through the narrative, and has it reflect the state of Wilde’s own life depending on where the story has gotten to. For a first-time writer/director, Everett has revealed himself to be someone who should be encouraged to get behind the camera again as quickly as possible.

Rating: 8/10 – though the movie examines the tragedy of Wilde’s final years, The Happy Prince isn’t the depressing, maudlin experience that some viewers might be expecting, and instead is a quietly powerful expression of the will to survive in the bleakest of circumstances and surroundings; with effective supporting turns from the likes of Firth, Watson and Wilkinson, and appropriately gloomy cinematography by John Conroy, this is yet another potent reminder of Wilde the man, and his legacy.

Set in Bradford, two young friends, Arbor (Chapman) and Swifty (Thomas), are looking for ways to earn a bit of money to help their respective families.  Arbor and his older brother, Martin (Tittensor) live with just their mother, Michelle (Manley); she’s struggling to pay their bills, while in Swifty’s household, too many children and not enough income means his dad (Evets) is known as “Price-Drop” because he’ll always take a lower price when trying to sell something.  As they try and take on more adult roles, the duo get involved with a local scrap dealer, Kitten (Gilder).  Begrudgingly at first, he takes the scrap they find here and there, until their persistence pays off and they win his quiet approval.  A fight at school sees both boys excluded and they take the opportunity to collect as much as they can.  They also find that Kitten has a horse that, when it’s not harnessed to a cart to collect scrap, is entered in local horse-and-cart races.  When Kitten discovers that Swifty has a natural way with horses, he begins to favour him over Arbor.

This sours the boys’ friendship and leads to arguments between them.  It also leads Arbor to steal some valuable copper plating from Kitten and try and sell it to another scrap dealer in another town.  However, Arbor’s luck runs out when the men who sold Kitten the plating also arrive at the scrap dealer’s and take not only the plating but the other scrap Arbor has amassed and leave him with nothing.  Forced to make amends with Kitten, Arbor has to steal some underground cabling that’s part of the nearby power plant complex.  He persuades Swifty to help him, but their plan goes awry, and with serious consequences.

From the outset, The Selfish Giant paints a grim picture of life in the North of England, with its run-down urban settings, permanently overcast skies and scrapheap metaphor.  This is a depressing, often angry, often frustrating slice-of-life movie that sets up its two main characters as good-hearted kids who are just trying to do what they can for their families – even if their methods are not exactly legitimate – and whose friendship is probably the only really good thing either has in their lives.  With Life proving a daily struggle in so many ways, it’s this attachment and commitment to each other that gives the movie its heart and provides a welcome respite from the harsh realities that hinder them from having a better life.  Their reliance on each other, quietly understated but the glue that binds their friendship, is the one positive that keeps them going when everything else around them is so transitory.

Given the gloomy backdrop, you could be forgiven for thinking that there isn’t any humour to be found in the movie, but thankfully there is, borne out of the two boys’ experiences and offering occasional relief from the somber drama.  Of the two of them, Arbor is the joker, the piss-taker who doesn’t realise he’s being tolerated rather than included, while Swifty’s softer, more approachable personality gives rise to the probability that of the two of them, he’s the one most likely to make something of his life (and maybe escape their grim surroundings).  Once Swifty becomes more involved with Kitten’s horse, it’s clear that Arbor is aware of this too, and the rift that develops between them becomes inevitable.  It doesn’t help that Arbor feels alienated from everyone else around him – even his family – and that his options for the future are dwindling fast; he’s only thirteen but already his potential seems exhausted.

It’s a terrible realisation, and under the auspices of many other directors, would leave most viewers feeling dismayed and hollow inside at the (perceived) injustice of it all.  But under the careful eye of award-winning documentary filmmaker Barnard – she made the hugely impressive The Arbor (2010) – The Selfish Giant is an absorbing, thoughtful, intelligent, heartfelt, and ultimately redemptive movie that pulls very few punches in its depiction of “slum” life, and has no time for sentimentality or anything even remotely maudlin (just as the characters don’t).  Barnard handles the material with a surety that draws in the viewer and makes them root for Arbor and Swifty all the way, and shows she has an instinctive appreciation for the trials and tribulations the characters experience.  She also has marvellous support from DoP Mike Eley and editor Nick Fenton, and elicits exemplary performances from her two leads (both making their acting debuts).

Inspired by Oscar Wilde’s short story of the same name (though it’s hard to find any real relation between them), the movie owes more to Of Mice and Men than anything else, but is as much its own thing as to make any real comparisons irrelevant.  What is clear is that Chapman and Thomas are both actors with very bright futures and Barnard’s move to feature filmmaking has been way too long in coming.

Rating: 8/10 – often tough to watch, and not afraid to leave its audience as battered and bruised as its two protagonists, The Selfish Giant is as far from a feel good movie as you’re likely to get, but an impressive achievement nevertheless; raw, ambitious and unexpectedly moving in places, this is a movie that continues to resonate long after it’s been seen.