Set in the (very) snowy Canadian wilderness, Edge of Winter begins with an awkward meeting between Elliot Baker (Kinnaman), his ex-wife, Karen (Lefevre), their two sons, Bradley (Holland) and Caleb (White), and Karen’s new husband, Ted (Benson). The reason for the meeting is due to Karen and Ted heading off on a cruise holiday and needing Elliot to look after the boys. Everyone looks and feels uncomfortable, and it’s clear from Karen’s behaviour that Elliot isn’t exactly her first choice, but he is the boys’ father.

We never learn the reason why Elliot and Karen’s marriage ended, other than that the boys were “more mature” than their father. But his nervous attitude and eagerness for their visit to go well serves as a signal that all is not well with Elliot himself, and that it’s unlikely he’ll get his wish. Of the boys, Bradley is the more withdrawn and unhappy at having to spend time with his father. He’s a teenager and probably remembers more about the breakup of his parents’ marriage than he’d like (though how long they’ve been divorced is something else we never learn). On the other hand, Caleb, who is a few years younger, is more open to the idea.

The boys’ discovery of Elliot’s hunting rifle should be the opportunity for him to lay down some boundaries, but instead he offers to take them where they can learn to shoot. On the trip, Elliot lets his sons know just how important their visit is to him, and even goes so far as to confiscate Bradley’s mobile phone so that it doesn’t become a hindrance to their all getting on. When they arrive at the place where they can learn to shoot, Bradley’s first experience of firing a rifle concludes with his being embarrassed and refusing to carry on. Caleb is more enthusiastic, and he does well. When it comes time to leave, Elliot lets Bradley drive, but an argument between the brothers leads to their car skidding off the road and into a ditch. Unable to get the car free, the trio are forced to spend the night there. And while they wait, Elliot learns something that has a tremendous effect on him.

The next morning, and with Elliot claiming that it’s too far for them to walk back to the highway, they head off to reach a cabin by a lake that Elliot says is near enough for them to get to. When they get there, both Bradley and Caleb begin to wonder just how long their father is planning to stay there before trying to get home. Elliot himself is less than forthcoming, and the sudden arrival of two fishermen leads to the realisation that their father may not even want to get back home, and that maybe what he really wants is for the three of them to stay at the cabin indefinitely…

From the very first moment we see Elliot – dealing with a debt problem on the telephone – we know that all is not well with him. He looks pale and uncertain about things, anxious and agitated in a way that speaks volumes about his character right from the off. Whether this is the way the script describes him, or a decision made by Kinnaman in terms of his portrayal, or the way that first-time feature director Connolly advised the actor to portray Elliot, his agitated state works as a clumsy kind of cinematic shorthand: this is a man on the edge. But aside from having money problems, we never learn very much about Elliot, or the reasons for his being so anxious. Instead we’re left with a poorly constructed portrait of a man trying to connect with his sons who doesn’t understand the difference between appropriate and inappropriate, and who has no cognisance of the harm he’s doing in trying to bond with them.

As a result, Elliot’s behaviour stretches the viewer’s patience. With little or no back story to fill in the gaps, he becomes the movie’s weakest link, called upon to propel the narrative forward by virtue of some equally weak plotting. The arrival of the fishermen inevitably leads the movie into confirmed thriller territory, but it’s at the expense of what little credibility has been achieved so far. Elliot’s determination to keep his sons with him becomes increasingly preposterous (just how deluded is he to believe that hiding out at the cabin indefinitely is a good idea?), and his efforts to “keep them safe” are as equally preposterous on both a dramatic and a conceivable level. 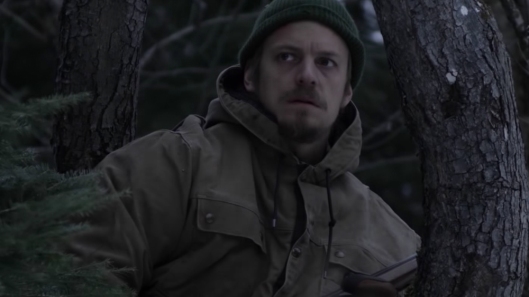 The movie isn’t helped by the pedestrian pace adopted throughout. Connolly, along with editor Greg Ng, fails to realise that this isn’t an indie character study (even though there are elements of this buried in the script), but a slowburn thriller that should be highlighting the horror inherent in its basic storyline: that the biggest threat to the two boys’ safety is their own father. Instead it downplays any terror in favour of clumsy interactions between the characters, developments in the plot that defy rational explanation (the burning of the cabin, for one), and a reveal that begs the question, how could Elliot have done this without anyone else knowing? There’s no sense of urgency to help make the final twenty minutes more exciting than the rest of the movie, and no sense that the boys are in any real danger. Instead, the script (by Connolly and Kyle Mann) lumbers through an unconvincing series of confrontations and encounters until ending on a whimper rather than a bang.

Rating: 4/10 – with its cast able to provide only adequate performances thanks to the under-developed script, Edge of Winter is a disappointing and unrewarding experience; not even the beautiful Canadian locations can compensate for a movie that consistently avoids meeting its audience’s expectations, and which wastes too much time in achieving very little of merit.