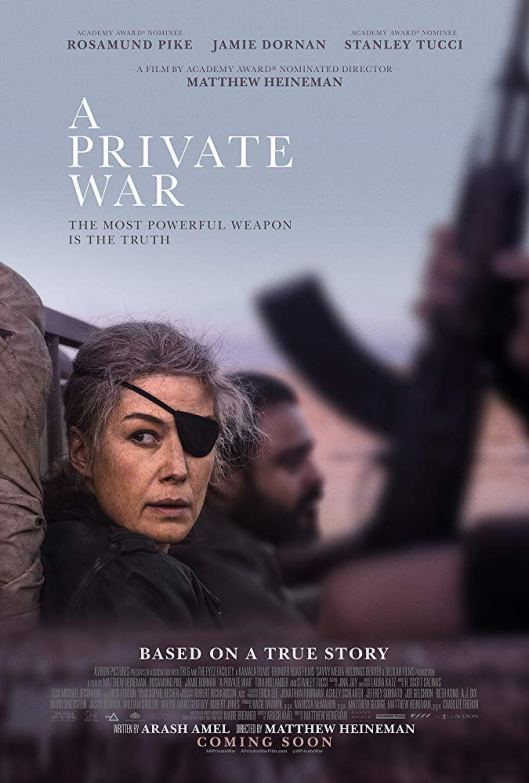 Marie Colvin (Pike) is a journalist and war correspondent working for the Sunday Times. She goes where most other journalists wouldn’t even think of going, but her work is highly personal and highly praised. However, in 2001, while in Sri Lanka, her return journey from a meeting with the Tamil Tigers is ambushed and Marie is wounded in the attack, losing the sight in her left eye. Back home she adopts an eye patch, and after a period of recovery, throws herself back into the fray by visiting Afghanistan and Iraq, and despite suffering from post traumatic stress disorder. She also meets freelance photographer Paul Conroy (Dornan), and they form a dedicated partnership, as they document the effects war has on the people of these countries, and the atrocities they have had to endure. But continued exposure to civil wars and the suffering of others has made Marie erratic and unpredictable, and her editor, Sean Ryan (Hollander), is concerned about her continuing to travel to war zones. But then, in 2012, comes news of the humanitarian crisis in Syria, and what’s happening in the city of Homs, and Marie determines to see for herself how bad it is… 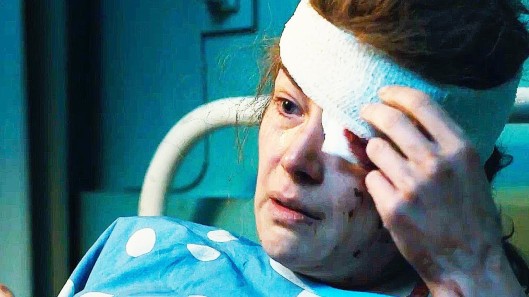 Adapted from the article Marie Colvin’s Private War by Marie Brenner, which was published in Vanity Fair in 2012, A Private War begins (and ends) with a quote from Colvin: “You’re never going to get to where you’re going if you acknowledge fear.” It’s an appropriate message, as the movie shows just how fearless Colvin was when she was in the middle of a war zone, or if her life were in immediate danger. Her fierce determination and selfless behaviour allowed no time to be afraid; that was for when she was at home, and dealing with the nightmarish images that she’d seen over the years, and which continued to haunt her. At one point, Conroy states what may well have been the truth: that Colvin was addicted to her work, and that being waaaay past the front line in any given conflict was what she lived for. Brave or foolish, the movie doesn’t judge. Instead, Arash Amel’s psychologically complex screenplay, and Matthew Heineman’s tightly controlled direction highlight the ambiguity of emotion that prompts someone to only truly feel alive when they’re in the midst of death. And the ways in which Colvin rejects any concern for her safety shows just how addicted she became. 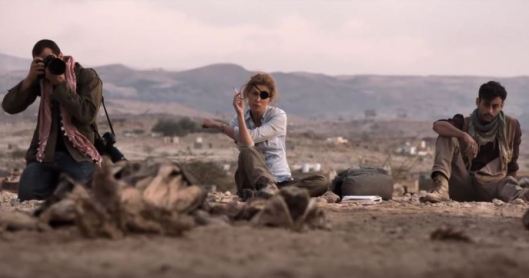 To show all this, the movie doesn’t attempt to lionise its heroine, or sugar coat the fact that Colvin could be abrasive and demanding. She also had a drink problem, but Amel’s script acknowledges this and then moves on; it doesn’t define her, her passion for the truth of an issue does. All of this is brought out by an incredible career-best performance from Pike. Tough, vulnerable, overwhelmed, arrogant, devastated, removed, passionate – Pike is all these things and more as Colvin, and she shows an understanding of the journalist’s mindset that adds an emotional resonance to the material. When Colvin’s story reaches Homs, the movie manages to be both hopeful and triumphant even though the outcome is inevitable, and Pike plays the part as if Colvin is invincible. This makes the ending all the more heart-rending, but in keeping with the serious tone adopted throughout, any melodrama is avoided, and Heineman’s matter-of-fact approach to the material wins out. Given the intensity and power of Pike’s performance, the rest of the cast don’t fare quite as well, and secondary characters such as Colvin’s best friend, Rita (Amuka-Bird), and late arrival lover, Tony (Tucci), pop up now and then to little effect, while some of the London-based scenes border on perfunctory, but otherwise this is a gripping exploration of one woman’s need to make a difference when no one else could – or would.

Rating: 8/10 – an intelligent, fascinating movie about an altogether different form of addiction, A Private War is sobering and thoughtful, and not afraid to reflect the horrors we inflict on each other in the name of religion or ethnicity or just plain hatred; visceral and uncomfortable in places, and as determined not to apologise for this as Colvin would have been, the movie acts as a reminder that heroism comes in many different forms.

For Amer and Raghda, love began in a Syrian prison in 1989. They had both been arrested for protesting against the Syrian regime, but on their release they married and soon had four children, all sons: Shadi, Fadi, Kaka, and Bob. In 2009, Raghda was imprisoned again for writing a book that was critical of the Syrian government. When she was released, the Arab Spring protests that began sweeping the country made the family’s situation untenable, and they fled to Lebanon, and the now notorious Yarmouk Camp. There, the French Embassy granted them political refugee status, and they moved to Albi in France. But life in France brought with it a new set of problems: as the family adjusted to being in a foreign country, the relationship between Amer and Raghda began to fracture. With both unable to reconnect with each other following Raghda’s incarceration, the stresses and strains of living “peacefully” began to drive a wedge between them that made life difficult for Amer and Raghda and their children. While their country sank further and further into ruin thanks to the still continuing Syrian Civil War, Amer and Raghda fought their own war of attrition, one that threatened to tear them asunder as irrevocably as their homeland was being torn asunder…

Shot over a five year period from 2009 onward, A Syrian Love Story is a heartbreakingly raw examination of a relationship in freefall. Director Sean McAllister, having gained the trust of Amer and Raghda and their children, has assembled a movie that is often unbearably painful to watch. With his camera often positioned uncomfortably close to the “action”, McAllister captures the depth of feeling and distressed emotions of both parents. In the beginning, Amer is a loving father and devoted husband – his affection for his youngest son, Bob, is lovely to see – dedicated to looking after his family in Raghda’s absence, and it’s his solid presence that anchors the movie until her return. Up until then, all we’ve seen of Raghda is photographs that show a lively, vibrant woman with a ready smile. But the Raghda we finally meet is a pale shadow of her former self, silent, withdrawn, and seemingly unhappy with being away from her home country; whatever trauma she suffered while in prison is still with her. Faced with this change in his wife, Amer proves unable to cope, and as their marriage begins to crumble, we’re witness to moments that are so uncompromisingly raw and honest, they’re by turns difficult to watch and unavoidably compelling.

That it never feels exploitative is due in large part to the relationship McAllister has built up with the family. At times he’s brought into the conversations (and the rows), and asked what he thinks. McAllister cannily avoids being pinned down by either side in the marital divide, but over time he does provide support for the children, allowing them an outlet for their own feelings of confusion and anger and loss. These moments are some of the most affecting in the whole movie, as the effects of leaving Syria and their parents’ break up are expressed calmly and rationally, while their expressions point to the turmoil going on inside them. Particular attention is paid to Bob, for whom the whole experience at times seems to be having the greatest impact, as when he expresses his desire to return to Syria and take a knife with him to kill President Bashar al-Assad (he’s only five or six when he says this). Death and murder, always there in the background, intrude more towards the end as Shadi points out all his friends who have died, pointing them out from photographs showing much happier times. It’s a poignant moment, and a potent one too – one of many in the movie – a reminder of what they’ve escaped from, and how important it was that they did.

Rating: 9/10 – an unflinchingly honest and emotionally devastating documentary, A Syrian Love Story juxtaposes the breakdown of a marriage with the struggle to find a foothold in a foreign land; ably balancing the personal with the political as well, this is illuminating, superbly assembled, and an invaluable glimpse into the effects of a refugee crisis that, sadly, shows no sign of abating.