A modern-day adaptation of W.R. Jacobs’ classic horror tale, The Monkey’s Paw begins promisingly with a well-staged, condensed version of the original tale as seen through the eyes of Gillespie (Kelly) as a child. Years later, Gillespie is working as a supervisor at a factory. Also working there are pals Jake (Thomason) and Cobb (Lang). A mistake with an order gets Gillespie fired. Later that night, Jake and Cobb run into Gillespie at a local bar. He tells them about the monkey’s paw, and how it grants three wishes to whomever owns it; once the wishes are used, it can move on to another owner. Jake takes hold of the paw and makes a wish: that a car in the parking lot should be his. When Jake and Cobb leave, they look at the car and find the keys are in it. With Jake driving they go for a spin along some of the back roads. Swerving to avoid an alligator in the road, Jake loses control of the car and hits a tree; the impact sends Cobb through the windshield, killing him. In a panic, Jake wishes his friend was alive, then when it doesn’t work straight away, he flees the scene. After he’s gone, Cobb comes back to “life”.

So far, so good. Some real thought has been put into the set up, and the car crash is effectively staged. Cobb returns to “life” with some facial scarring, but otherwise, apart from some jerky movements, looks pretty normal. Jake throws away the paw in an abandoned building, and after a day or two brooding about what’s happened, tries to get on with his life. Until Cobb shows up, demanding that Jake use his third wish to bring Cobb and his estranged young son together again. Jake sees that Cobb’s return has made him dangerous and he refuses to do so. At this point, Cobb begins targeting the people Jake knows, including their boss Kevin (Favreau), his wife (and Jake’s ex-girlfriend Olivia (Pearce), Gillespie, and Jake’s brother and sister-in-law (Berry, Gennarino). 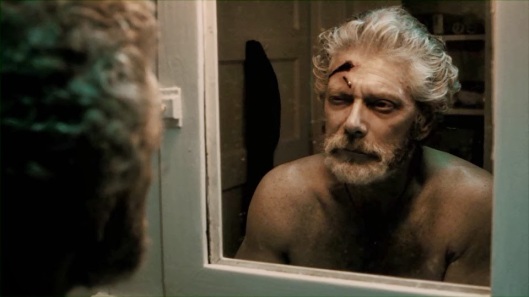 At this point, the movie starts to lose its way, opting for a Friday the 13th/slasher style approach as Cobb picks off Jake’s friends and family one by one. The previous slow-build of tension is left behind as Jake struggles to deal with what’s happening while at the same time trying to get back with Olivia. Motivations and logic are put aside as Cobb goes on an undetected killing spree, where the police, led by Detective Margolis (Dutton) are so far behind they might as well not be involved. Cobb kills with impunity time and again and seems able to vanish at will in-between times. Eventually, Jake retrieves the paw and there is a showdown at the home of Cobb’s estranged son.

The extended premise of The Monkey’s Paw, that those we bring back from the dead may want more from their new life than they could have had before, is an interesting one that could have been explored a lot further. Lang brings an initial pathos to his role, but it’s quickly put aside so he can become the script’s required psycho. (A mention here for how Cobb looks as the movie continues; aside from the facial scarring, he also shows more and more decay, courtesy of special makeup effects artist Emily Burka.  It’s an intriguing look, which, if the movie had taken place over a longer period, would have added another layer to the character’s mental and physical decline.) Jake goes from cocky to desperate in the time to takes for Cobb to crash through the windscreen, and although Thomason – back in familiar territory after Simmons’ Husk (2011) – struggles to maintain a grip on the character as the movie goes on, he’s still a likeable presence on screen.

The script, by Macon Blair, as noted before has some interesting aspects in its first half hour, and if The Monkey’s Paw had retained this psychological approach, it may have turned out better. As it is, the movie suffers by lurching from one (admittedly) well-executed kill scene to the next, leaving the viewer in unnecessarily unoriginal waters and hoping for a better resolution (which doesn’t come). Simmons shows occasional flashes of creativity that bolster the script (the kill scenes), but ultimately he can’t get around the lack of imagination the script settles for.

Rating: 6/10 – there’s a better movie here than might have been expected but it’s severely let down by it’s need to fit in with an already overcrowded market; psychological horror movies are few and far between these days – this could have been one of them.