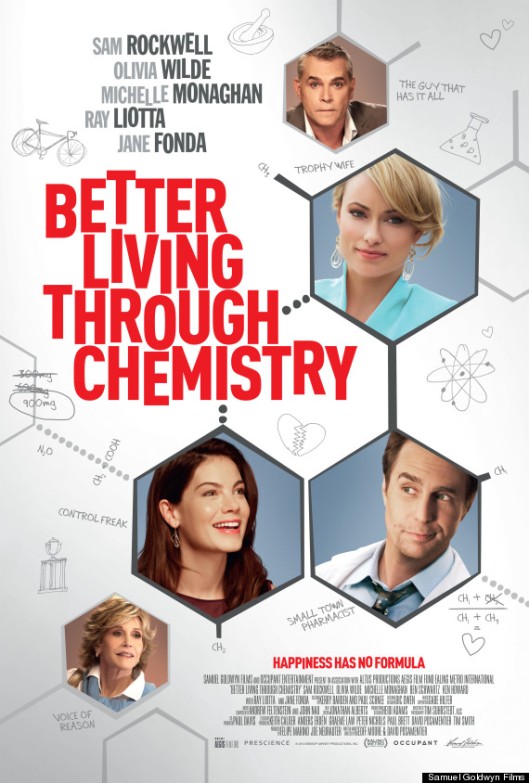 Another slice of American small-town life, Better Living Through Chemistry introduces us to pharmacist Doug Varney (Rockwell).  Doug is married to Kara (Monaghan) and they have a twelve year old son, Ethan (Holzer).  Kara is too absorbed in her work as a fitness instructor to pay Doug much attention and they haven’t had sex for ages, while their son is getting into trouble at school.  At work, Doug has just taken over his father-in-law’s pharmacy business but is dismayed to find the sign isn’t changing from Bishop’s Pharmacy to Varney’s Pharmacy.  Browbeaten and ignored by the people closest to him, Doug continually finds it difficult to stand up for himself, or make any lasting changes in his life.  Seeing no way out of his predicament, he coasts along resignedly… until he meets Elizabeth (Wilde).

Elizabeth has recently moved to town with her husband, Jack (Liotta).  She takes a lot of pills and drinks a lot of alcohol and tells Doug about her troubled marriage.  They begin an affair, during which Doug takes one of Elizabeth’s pills, the first time he’s ever taken any drug, prescribed or otherwise.  Gaining a liking for how drugs can make him feel, Doug begins to make his own, mixing various pills in order to maintain and then boost the wellbeing he’s experiencing.  The drugs boost his confidence, and this in turn, helps him address matters at home.  He reconnects with Ethan, and devises a plan to beat Kara in the annual cycling race she has dominated for five of the last six years.  And as well as juggling work, his home life, and his affair with Elizabeth, Doug also has to deal with a routine investigation by DEA agent Carp (Butz), that might uncover his misuse of his stock.

Doug and Elizabeth’s affair becomes more serious and they plan to leave town together, but Elizabeth has signed a pre-nuptual agreement, and Doug will lose what little he has in a divorce.  They decide to bump off Jack by making a slight change to his prescription.  Elizabeth leaves town to establish an alibi, and Doug arranges for Jack’s medication to be delivered by assistant Noah (Schwartz).  But their plans go awry, and in a way neither of them could have foreseen… 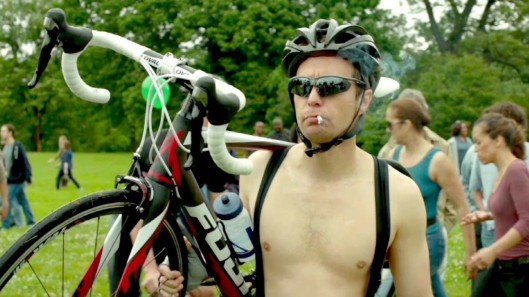 A bittersweet drama with comedic episodes woven into the movie’s fabric, Better Living Through Chemistry is an enjoyable though perilously lightweight movie that benefits tremendously from Rockwell’s confident central performance.  There’s little here that’s entirely new but co-writers/directors Moore and Posamentier have done a good job in bringing together and exploiting both the humorous and the dramatic elements.  The movie switches focus with ease from scene to scene, offering different moods at different times, but there’s nothing forced or contrived about the way events unfold, or how the characters react to or deal with them.

This is largely due to the script, which (as mentioned above) only occasionally strays towards depth, but does have a few things to say about love and marriage (even if we’ve heard and seen them many times before).  Where it does do well is in its ability to upset the audience’s expectations.  After the cycling race, Doug and Kara have sex, and it’s the most satisfying sex they’ve had in ages, but it doesn’t presage a sea change in their relationship.  Instead, it reinforces Doug’s decision to leave Kara for Elizabeth.  It’s this kind of twist in the tale that the movie does so well, and this and some other surprises stop it from being entirely predictable.

Unfortunately, the characters are mostly one-dimensional, especially as written, but thankfully the cast are more than up to the challenge of breathing life into them.  Rockwell excels as the mild-mannered pharmacist turned would-be killer for love (you’ll never look at him in the same way again after seeing him in a leotard), and carries the movie effortlessly, making Doug an everyman character we can all sympathise with and root for.  Wilde has the glamour role, and carries it off with ease, subverting expectations as to Elizabeth’s motivations at every turn.  Monaghan has the least developed role but still manages to make Kara a shade more interesting than if she was just a hard-nosed bitch, and in minor roles, Liotta (providing what amounts to a cameo) and Butz add flavour to the proceedings.  The oddest role goes to Jane Fonda who not only narrates the movie as if she’s been witness to everything that happens, but also appears briefly at the end, and is listed as herself in the end credits.

With its well-chosen cast and its carefree approach to recreational drug use, Better Living Through Chemistry is neither a cautionary tale nor an exposé of small town secrets.  At its heart it’s a look at one man’s road to emotional self-recovery, and on that level it works splendidly.  But without any appreciable depth to proceedings, the movie misses out on being as effective as it could have been.

Rating: 7/10 – a charming movie given life by its well-chosen cast (it’s hard now to envision first choice Jeremy Renner in the role of Doug), Better Living Through Chemistry often comes close to letting itself down but just manages to avoid doing so; an undemanding movie, but still a winning one for all that.

2 thoughts on “Better Living Through Chemistry (2014)”