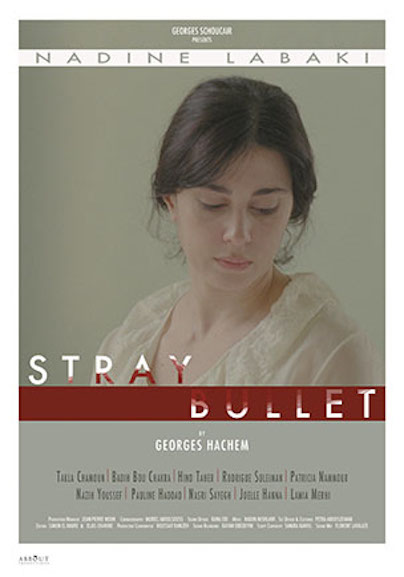 Set in Palestine at summer’s end in 1976, Stray Bullet examines the increasing tensions that arise a fortnight before Noha (Labaki) is due to marry Jean (Youssef).  Noha is unsure if she wants to go through with the wedding; talking to her friend Wadad (Nammour), it becomes clear that Noha still has feelings for Joseph (Sleiman), the man she was seeing up until three years ago.  She tells her friend that she has arranged to meet Joseph, but she doesn’t know if her feelings for him are strong enough to convince her to cancel the wedding.  Confused about her own emotions, and unsure of how Joseph feels about her, Noha goes ahead with the meeting already aware that her family will not agree to her seeing Joseph, and that if they find out it will cause a rift between herself and her brother Assaf (Chakra).

Noha meets Joseph and they drive out into the nearby countryside.  They talk about how they feel but Noha is disappointed with Joseph’s reactions and gets out of the car.  She walks out of sight of Joseph and finds herself witness to a female revolutionary murdering someone tied up in a sack.  Joseph appears having heard the shot.  While Noha remains in hiding, Joseph is taken away by the revolutionary’s men.  Left with no other option, Noha walks back home.

Later that evening, Noha, her mother (Taher), and her older sister Leila (Chamoun) attend a pre-wedding get together at her brother’s.  Jean is there too, along with his mother, while the female revolutionary Noha saw earlier, Alexandra (Haddad), is also there (though it’s never made clear how she fits into the family dynamic).  There follows a debate about the war – so recently over and yet so clearly on the verge of being resumed –  and further discussion about the wedding.  As the evening progresses, circumstances provide Assaf with the knowledge that Noha has seen Joseph.  He assaults his sister before throwing her out and telling her she isn’t his sister anymore and he doesn’t know her.  As she reaches home, tragedy strikes and Noha’s life is turned completely upside down.

Stray Bullet, with its theme of family loyalty versus personal freedom, is a dour piece, deliberately paced, and gloomily lit.  The visual style sits well with Noha’s emotional demeanour and her struggle to come to terms with her own feelings.  The conflict she feels towards Joseph highlights the way in which she also feels estranged from everyone else around her, particularly her sister, who being older and still unmarried, is who she fears she will become if she doesn’t marry.  Noha wants to get married and avoid becoming like Leila, but at the same time she has no feelings for Jean.  Family pressure has got her this far, to a point where if she doesn’t act, it will be too late.  But which is the worst option: to be married to someone she doesn’t love, or to remain single and unloved by anyone else?

Labaki is a strong screen presence and convincingly portrays Noha as a woman determined to find her own path in life and not the one her family thinks she should take.  Noha is wilful, at times scornful, of her sister and mother’s concerns about her commitment to the marriage, and Labaki’s performance is a fierce exercise in emotional warfare, burying Noha’s vulnerability so that she can survive the battle she knows is ahead of her.  The moment when Noha rails against Assaf is a short but gripping one, and in that moment, Labaki gives voice to all the pain and insecurity that Noha has been keeping in check for so long.  It’s a stand-out moment, and a mesmerising one thanks to Labaki’s committed performance.

Director Hachem has assembled a fine cast, and his script – while at first glance a little predictable – gives everyone plenty to do, even in the smaller roles.  Chamoun is particularly good as Noha’s spinster sister and the monologue she gives detailing the failure of her engagement is etched with deep-rooted regret and self-pity.  Hachem also makes good use of close-ups, cutting in tight on the characters’ faces, leaving nothing to the audience’s imagination as to how these people are feeling, and how it’s all affecting them.  Anger, disappointment, expectations, loss, distress, rage – all these and more are clearly visible.  The undercurrents can that affect family life are highlighted with unflinching directness. As a result, the movie’s coda is nothing more than devastating.

Rating: 8/10 – a short but powerfully realised movie that lingers in the memory thanks to good performances and a straightforward visual style; with clear direction and a streamlined, character-driven script, Stray Bullet is a poignant, rewarding experience.