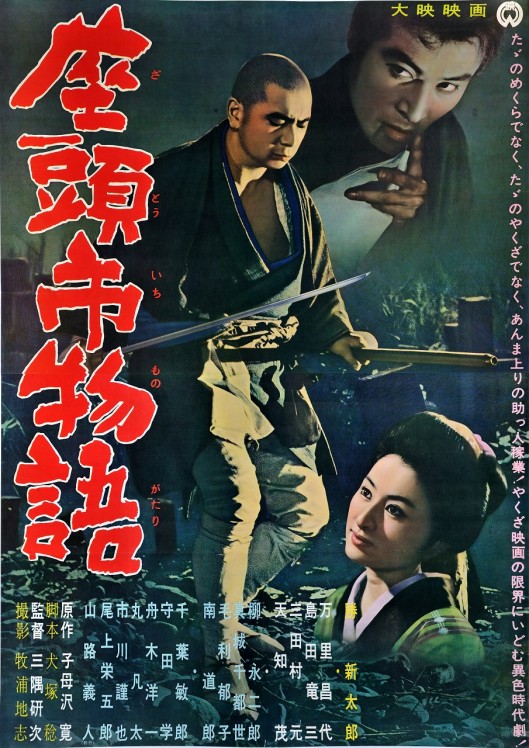 The first of twenty-five Zatoichi movies* made between 1962 and 1973, and all starring the magnificent Shintarô Katsu, The Tale of Zatoichi introduces us to the famous blind masseur turned wandering swordsman.

When we first meet Zatoichi he’s approaching a small village, Iioka.  He knows a yakuza boss there called Sukegorô (Yanagi), and accepts an offer to stay as Sukegorô’s guest.  He soon arouses the enmity of Sukegorô’s men, particularly Tate (Minami), but also the warm attention of Tate’s sister Otane (Banri).  It’s not long before he learns of the enmity between Sukegorô and Shigezô (Shimada), another yakuza boss in the neighbouring village of Sasagawa.  Both sides are looking to escalate the bad feeling between them into all out war, but neither has a tactical or manpower advantage, or the confidence to attack the other.  With Zatoichi as his guest, Sukegorô plans to persuade him to fight on Iioka’s side; he also hopes Zatoichi’s fame as a swordsman will give them an easy victory.  But Shigezô has his own guest who’s good with a sword, Master Hirate (Amachi), and so the two rivals wait for a break in the stalemate.

Zatoichi and Hirate meet and find they have a mutual respect for each other.  Hirate reveals that he is ill with consumption; Zatoichi is filled with concern for him, and while they talk about the impending war between the yakuza gangs, Zatoichi knows that his new friend would not be a fair opponent to take on.  He decides to withdraw from any fighting, much to Sukegorô’s disgust.  When Hirate collapses, Sukegorô seizes his chance to attack.

Alongside all this, Zatoichi becomes involved in the welfare of Otane.  She has split from her lover Seisuke (Morita), who enlists Tate’s help in winning her back.  Her continued refusals, allied with Zatoichi’s kindly and protective nature toward her, leads Otane to fall in love with him, thus adding to the problems it seems he will be compelled to solve.  With a showdown between Zatoichi and Hirate proving to be inevitable, the reluctant swordsman must do what he can to resolve matters before he can leave. 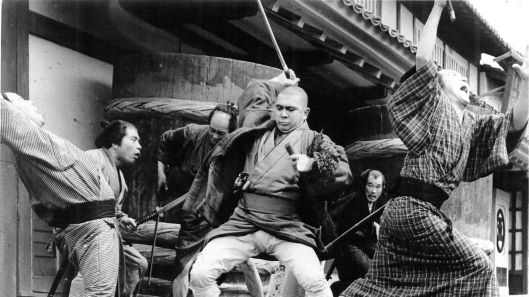 It’s easy to see why Zatoichi was such an unexpected success when the character debuted in 1962.  As brought to life by the splendid Katsu, Zatoichi is a wonderfully realised character, fully rounded from the outset, and possessed of a readily identifiable personal code, one that’s entirely separate from the accepted codes of the yakuza or samurai.  He has a wry, self-deprecating sense of humour and relishes the physical pleasures in life (though he espouses any romantic attachments, at least while in Iioka).  He is fiercely loyal to those he respects, and in his relationship with Otane shows signs of being an early proto-feminist.  He hates injustice, rails at corruption, refuses to suffer fools gladly, and yet is reluctant to take up his sword unless it is absolutely necessary – and only he decides when this will be.  In this first movie we discover all this and more about Zatoichi, and taken as the nearest there is to an “origin” movie, The Tale of Zatoichi does such an incredible of introducing him that by the movie’s end we feel like he’s an old friend.  As the titular hero, Katsu is simply superb, juggling the physical demands of the role with a raft of emotional demands that are surprising for what must have been viewed as “just another” lone samurai movie.  It’s rare when an actor inhabits a role so completely from the beginning, but Katsu does it with consummate ease.

Of course it helps that Minoru Inuzuka’s script (based on the short story by Kan Shimozawa) pays as much attention to the human and emotional aspects as it does to the swordplay, investing time in the rivalry between the gangs, Otane’s domestic situation, the bond between Zatoichi and Hirate, and the myriad jealousies and resentments that Zatoichi’s presence ignites.  It’s a wonderfully layered screenplay, replete with moments of regret, sadness and tarnished hope.  From this, director Misumi has fashioned a wonderful piece of Japanese cinema, a more than worthy rival to Kurosawa’s Yojimbo (whom Zatoichi would meet later in the series), and a classic in its own right.  The movie looks beautiful as well, Misumi opting for a slightly off-kilter framing style that nevertheless keeps things fresh throughout (the highlight of this approach is when Sukegorô’s men approach Sasagawa via the river; even in black and white it’s simply stunning).

Rating: 9/10 – breathtaking and completely absorbing with an amazing central performance, The Tale of Zatoichi is an almost perfect start to the series; an outstanding movie with more going on during its ninety-six minutes than some movies achieve in twice the running time.

*All the Zatoichi movies will be reviewed in the coming months.