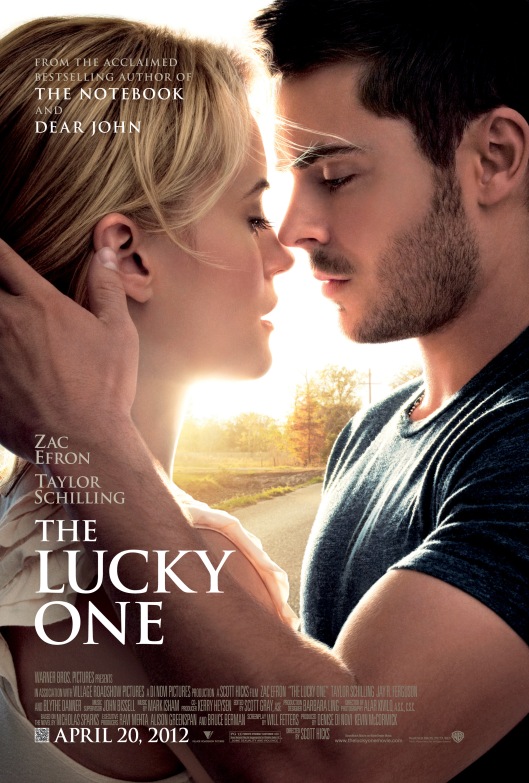 Adapted from the novel by Nicholas Sparks, The Lucky One opens in Iraq and a night mission where Logan (Efron) and his platoon run into Aces (Tuttle) and his platoon. There is a firefight with some Iraqis and Aces is killed. The next morning, Logan spies a picture of a woman in the rubble. He picks it up just seconds before an incendiary device goes off, killing several of his comrades. Logan survives, and for the rest of the tour he keeps the photo with him and it acts as a talisman, warding off harm and keeping him safe. He also tries to find out if anyone knows who the picture belongs to, but no one recognises it.

Back home, Logan traces the location where the picture was taken, and with his dog, Zeus, heads off on foot across country from Colorado to Louisiana, and the small town of Hamden, where after asking around, he discovers the woman’s name is Beth Green (Schilling) and she runs a kennels on the outskirts of town. When Logan goes there to tell her about the picture he finds he doesn’t know how to, and the situation is further complicated by Beth’s assumption that he’s there to apply for a job. Accepting the job, but with Beth having reservations about someone who walks so far just to work at a kennels, Logan makes himself useful doing repairs and general chores.

Beth’s grandmother, Ellie (Danner) takes to Logan from the start, as does Beth’s seven year old son, Ben (Stewart). The one person who doesn’t is Beth’s ex-husband, Keith (Ferguson), a deputy sheriff whose jealousy and violent temper have him believing that Logan is trying to usurp his position as Beth and Ben’s protector. With Keith making it difficult for Beth to move on with her life, Logan becomes increasingly close to her, and soon they are looking at each other with more than curiosity. They begin a hesitant romance, but Logan still finds it impossible to tell Beth about the photo, even when it becomes clear that Aces was her brother.

When Keith finds out that Logan was showing Beth’s picture around town he wastes no time in telling Beth (he also has the picture, stolen from Logan’s home). Beth confronts Logan and she asks him to leave. Keith makes an attempt to reconcile once more with Beth but when she rejects him, he threatens to take Ben there and then. Ben runs away, but in doing so, puts his life in danger…

With its typical stranger-with-a-secret-comes-to-town storyline, The Lucky One doesn’t bring anything new to the romantic drama genre, but in many ways that’s its strength. Its reliance on minor soap opera clichés to reinforce both the romantic and the dramatic aspects helps establish the movie as a straightforward telling of a familiar story, and one that the audience can take a great deal of comfort from. As Logan and Beth circle each other, there’s never any doubt as to how their romance will proceed, and the familiarity of the situation is aided greatly by the performances of Efron and Schilling, his brooding reticence complimenting her fragile beauty.

Beautifully set (and shot) in Louisiana, the movie moves easily from one reassuring plot development to the next, almost casually hitting its emotional high points, and thanks to Will Fetters’ astute screenplay, never trying to subvert or over-complicate matters. Hicks, who shot to fame with the altogether weightier Shine (1992), directs with a confidence that is reflected in the ease with which the cast inhabit their characters, and the credibility of their interaction. Efron plays the strong, silent type effortlessly but for long stretches Logan is almost a secondary character, as the movie sets up the family dynamic around Beth, Ben, Keith and Ellie. Once the romance kicks in, Efron gets to show just why he’s become one of the most sought after actors working today, showing a vulnerability the likes of Channing Tatum and Josh Duhamel (both male leads in other Sparks’ adaptations) would struggle to portray. It’s a low-key performance and one that befits the character of an ex-Marine trying to rebuild his life one step at a time.

Schilling also impresses as the put upon single mother putting a brave face on being divorced and bereaved at the same time, as well as looking for some way to rebuild her own life. Beth and Logan are kindred spirits in that sense, and when they begin their romance, their need for each other ignites a coming together that breathes new fire into both their lives (surprisingly, their love scenes are quite steamy for a PG-13 movie, but that’s not a bad thing). As Keith, Ferguson (mostly known for his TV work) makes more of the dastardly ex-husband role than appears to have been a part of the script, and the scene where his armour cracks during a recital given by his son is both unexpected and affecting in equal measure. Danner outshines them all, of course, but then if she hadn’t then something would have really been wrong.

The movie does have some faults, however. Logan’s PTSD is clumsily dealt with and is forgotten once he’s met Beth, and there’s a few too many occasions where the central conceit struggles to fend off its own implausibility, and Ben behaves a little too much like the semi-adult he clearly isn’t at seven years old, but these are minor complaints. All in all, The Lucky One is a rewarding experience, cleverly presented, and if things are a little too predictable at times – fans of this type of movie will be able to spot the outcome from a mile off – as noted above, the filmmakers’ determination to embrace the customary elements of such a storyline is a benefit and not a detraction.

Rating: 7/10 – a solid if unspectacular production, The Lucky One will please fans of the genre for its straight on approach and for treating its main characters with sympathy and respect; bolstered by often beautiful location photography, it’s also blessed with a score by Mark Isham that avoids all the usual emotional cues.