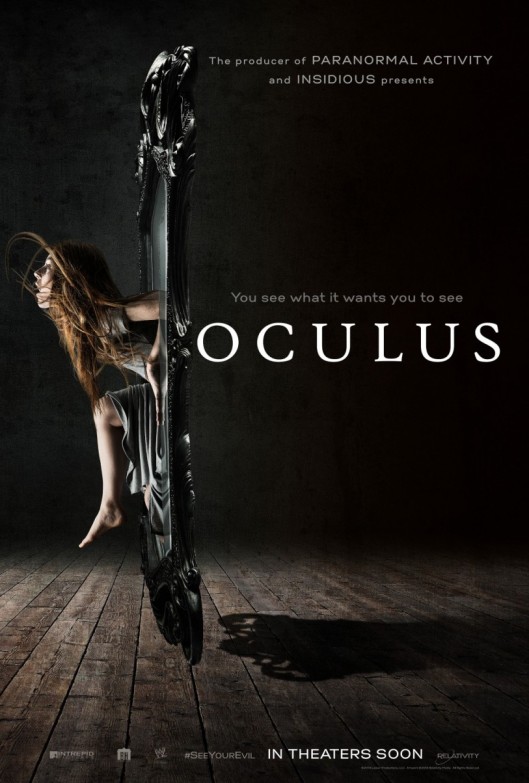 Upon his release from a psychiatric hospital, Tim Russell (Thwaites) is met by his sister, Kaylie (Gillan) and reminded of a promise he made when they were children: to destroy the mirror she believes was responsible for the deaths of their parents eleven years before.  Tim has done his best to overcome the trauma of that event, and has no wish to relive it.  But Kaylie has become obsessed with destroying the mirror, and since its time in their childhood home, she has kept track of it and has managed to get it put up for sale at the auction house where she works.  On the pretext of having it checked for any necessary repairs before sending it off to the buyer, Kaylie takes it to their old home; there she has set up cameras and various recording devices in an attempt to prove that the mirror is possessed of an evil force.  Tim is less than convinced, despite the number of bizarre deaths that have happened to the mirror’s owners over the years.  As the plan progresses, Tim begins to remember more and more about the past, and the events that led up to the deaths of their mother, Marie (Sackhoff), and father, Alan (Cochrane).  With the mirror increasingly able to manipulate their minds into seeing what it wants them to see, Tim and Kaylie fight to stay one step ahead in their efforts to destroy it. 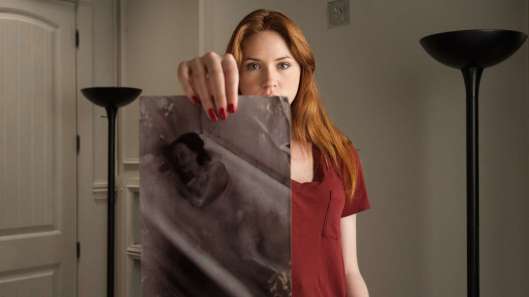 At first glance, Oculus looks and feels like a throwback to early Seventies horror, with its slow build up and emphasis on tension and suspense.  The early scenes, where Kaylie and Tim are introduced both as adults and as children (Basso, Ryan) are well constructed and as the movie unfolds, they show clearly how Kaylie and Tim have become the people they are now.  Young Kaylie is headstrong and a little rebellious; adult Kaylie is forceful and determined.  Young Tim lacks confidence and is easily scared; adult Tim is reticent and emotionally withdrawn.  The conflict between the two siblings is well handled and credible – even if what they’re attempting to deal with is incredible – and the dynamic of their relationship as children is echoed in their behaviour as adults.  It’s a smart move on the part of co-writer and director Flanagan, and helps keep things grounded when the tension and suspense is dropped in favour of a more violent and gory approach.

The structure employed here is unusual too.  Both storylines are allowed to run side by side, and in doing so, the movie keeps Kaylie and Tim in peril in two different time frames.  Although we know their parents died all those years ago, the how is still a mystery, and as the two strands are allowed to dovetail closer and closer together, so events become inter-related, with scenes cutting from then to now, allowing us to see, for example, adult Kaylie running into a room and then young Kaylie facing what awaited her there in the past.  It’s a clever approach and serves to keep the audience on the back foot for most of the last thirty minutes, but sadly, becomes too clever for its own good.  A more linear retelling would expose some lapses in the movie’s internal logic, and its reliance on all the cross-cutting to hide some further inconsistencies in continuity (though the one big problem with the movie is never adequately addressed: why not just destroy the mirror in the first place, why go to all the trouble of setting up cameras etc.).

With the two storylines allowed almost equal running time, it also becomes clear that the events of the past, though occasionally sacrificing coherence for effect (Alan’s recurring fingernail problem, Marie’s apparent possession), are the more engrossing and thrilling, while there’s too much arguing amongst the adults (as it were) for those sequences to be completely effective.  And with the present’s dependence on its scientific hardware and Kaylie’s unwavering belief in its effectiveness, the ease with which she and Tim are regularly outmanoeuvred becomes wearing and just a little too predictable.  In contrast, the past has more of a “kids-trapped-in-a-house-with-a-psycho-killer” approach, and their fight for survival is played out more effectively.

It’s no surprise, then, that the younger actors provide the more compelling performances, and are ably supported by Sackhoff and Cochrane.  Gillan overdoes the older Kaylie’s obsession with the mirror to the point where it becomes uncomfortable to watch, while Thwaites is stuck with playing the older Tim as little more than a bystander.  There’s a couple of suitably nasty moments – older Kaylie making the wrong choice between an apple and a light bulb; Alan removing a plaster from over his fingernail (it’s worse than it sounds) – and there are undeniably creepy moments involving one of the mirror’s previous victims that add to the dread-fuelled atmosphere.  Flanagan, who made the even creepier Absentia (2011), is definitely one to watch and as a calling card for the big leagues, Oculus should secure his future.

Rating: 7/10 – a horror film that attempts to mix an original storyline with its sequel, Oculus is brim-full of ideas, most of which work with unexpected panache; it’s a shame then that the sequel strand lets the movie down by being so derivative and predictable.