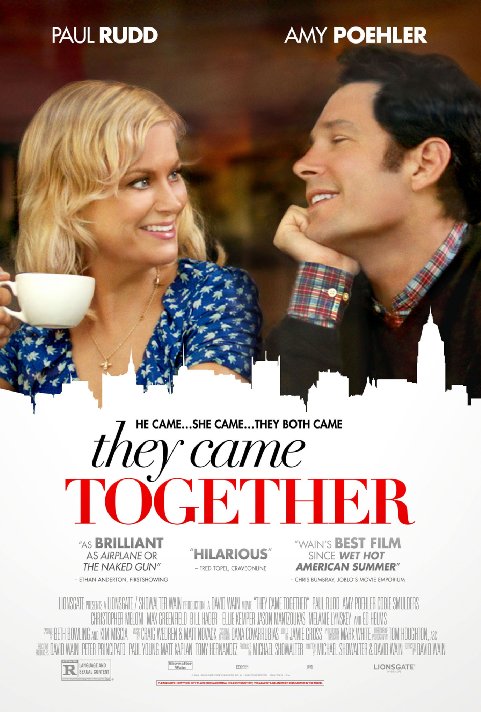 At a restaurant one evening, two couples – Joel and Molly (Rudd, Poehler), and Kyle and Karen (Hader, Kemper) – get to talking about how Joel and Molly got together.  Their answer: that it was like “a corny, romantic comedy kind of story”.  Molly was getting over the break up of a relationship, while Joel had just found out his long-time girlfriend Tiffany (Smulders) was cheating on him with a work rival (Black).  Cajoled into going to a Halloween costume party by friends, Joel and Molly literally bump into each other on the way, and an instant antipathy is born.  They bicker throughout the party, and Joel is unkind about Molly who overhears what he says; she walks out.  Some time later, they see each other again in a bookstore, and their mutual love of fiction brings them together.

They go for coffee, Molly introduces Joel to her son, Tucker (Skylar Gaertner), and both discover they have a (kind of) mutual connection through their work: Molly has an independent candy store, while Joel works for Candy Systems & Research, a candy store mega-company that is looking to put Molly out of business by building one of their stores directly opposite hers.  They fall in love but things don’t work out between them, and they split up.  Joel takes back Tiffany, while Molly begins dating Eggbert (Helms), her accountant.  Time passes.  Joel realises he doesn’t want to be with Tiffany and dumps her; at the same time Molly is all set to marry Eggbert.  Joel races to the stop the wedding but he’s too late: Molly has left Eggbert standing at the altar.  Joel tracks her down and declares his love for her.  Molly and Joel are reunited, and this brings their story full circle with Kyle and Karen… albeit with a twist in the tale.

From the outset, They Came Together is not your typical romantic comedy.  It takes the standard format of the genre – boy meets girl, boy loses girl due to silly row/misunderstanding/mistake, boy gets girl back again, they both live happily ever after – and messes with that formula to its heart’s content.  In many ways, the movie plays like a straightforward rom-com but director Wain and his co-writer Michael Showalter are far more interested in playing fast and loose with the format to let a little thing like fidelity get in the way.  Indeed, the movie lets the audience know  from the start that this will be a story told with a knowing wink and a nod, and it gleefully tramples all over all kinds of genre conventions: Molly’s parents prove to be white supremacists; Tiffany’s return is predicated on her not being able to be faithful to Joel – and telling him; and Joel and Molly’s first night together sees them fall into bed kissing for all they’re worth, only for them to be shown the next morning fast asleep and fully clothed but with their lips still locked together.

In its efforts to be both clever and outrageous, They Came Together – unsurprisingly – is very much a hit-and-miss affair.  There’s a fair degree of subtlety as well, but it’s often lost amongst the more uncomfortable, gross-out moments (Joel’s sudden attraction for his grandmother (Cohen) is a case in point, though it does go somewhere that’s completely unexpected).  When it sticks to poking fun at the often sappy nature of romantic comedies (and some romantic dramas for that matter), the movie is funny, charming, and pitch perfect.  When it’s out to claim ground from movies such as American Pie (1999) or Bachelorette (2012), it doesn’t fare as well.  It’s a shame because when it is gently skewering those staple ingredients, They Came Together is relentlessly inventive and downright hilarious.

Wain movie regular Rudd, along with Poehler, are a great choice as the cute couple, sparking off each other’s performances and expertly grounding the more extreme aspects of the script.  Rudd is an old hand at this kind of material, and while Poehler’s big screen outings consist largely of voice work, here she invests Molly with a kooky warmth that complements Joel’s often confused naiveté.  In support, Meloni as Joel’s boss Roland demonstrates what not to do when needing a crap and wearing a superhero costume with an unreachable zip, Smulders plays Tiffany as a self-aware bimbo who isn’t all she seems (which leads to the movie’s most unexpected, and brilliantly surreal, moment), and Helms is both unctuous and creepy as Eggfart (sorry, Eggbert).  There are a number of cameos in the movie’s last twenty minutes – one of which leads to a wickedly hysterical (and unfortunate) encounter with a policeman – and there’s a musical interlude featuring Norah Jones that breaks so many “fourth walls” it’s frightening and ingenious at the same time.

Overall, They Came Together is an enjoyable, wacky deconstruction of the romantic comedy genre, blackly humorous in places, dubiously amusing in others, but always entertaining.  Wain and Showalter’s story may run out of steam two thirds in, but they rescue things for a flat out funny finale that encapsulates almost every rom-com cliché you can think of (including one stupendously silly sight gag).  And things are left wide open for a potential sequel: They Came Together Again anyone?

Rating: 7/10 – when it’s funny it’s a riot, but They Came Together stumbles too often to be completely successful; even so, it’s joke to laughter ratio is pretty high, and with this much effort involved, the movie qualifies as a guilty pleasure anyone can be proud to admit to.