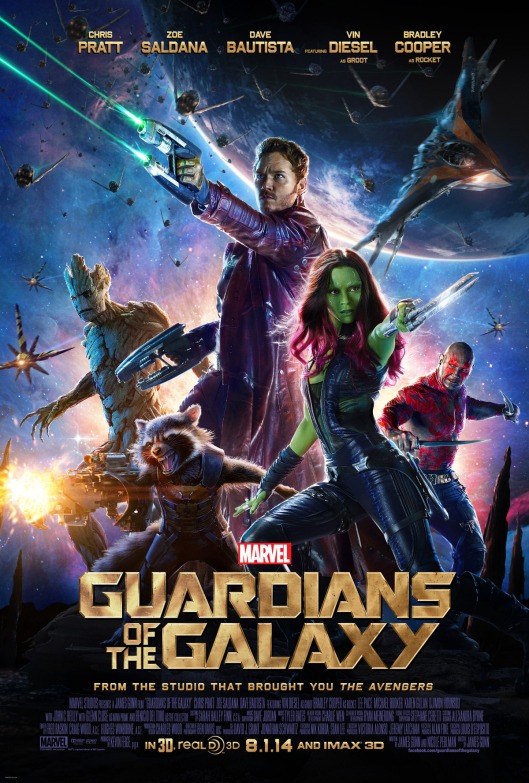 As a child, and following the death of his mother (Haddock), Peter Quill (Pratt) is kidnapped by aliens; as an adult, all he has as a memory of Earth and his past is a Sony Walkman and a cassette of his mother’s favourite songs.  Now a skilled thief working for the bandit who abducted (and raised) him, Yondu (Rooker), Quill steals a mysterious orb for an equally mysterious buyer but decides to sell it himself, taking it to the planet Xandar.  When the fence he tries to sell it to refuses to take it when Quill mentions the orb is being sought by Kree warlord Ronan the Accuser (Pace), the man who’d prefer it if people called him Star Lord finds himself attacked by Gamora (Saldana).  Gamora is the adopted daughter of Thanos (Brolin), sent by Ronan to retrieve the orb.  As they fight for possession of the orb it attracts the attention of Rocket Raccoon (Cooper) and his companion Groot (Diesel), who want Quill for the bounty on his head.  They all end up being arrested by the Xandarian police and are sent to the Kyln, a prison in orbit around Xandar.

Once there, Gamora reveals she means to betray both Ronan and Thanos, and wants the orb to be given over to another buyer who will know how to keep it safe.  The four become five when they convince inmate Drax the Destroyer (Bautista) to join them; he wants revenge on Ronan for the death of his family.  They escape, with the orb, and rendezvous with Gamora’s secret buyer, The Collector (Del Toro).  He reveals that the orb contains an Infinity Stone, a powerful gem that in the wrong hands could be used to destroy whole worlds.  One of The Collector’s assistants tries to use the Stone to kill him but she is unable to control the Stone’s power and she is killed, while The Collector’s base is partially destroyed.  Quill and the rest escape with the orb but are ambushed by Ronan; in a dogfight with her sister, Nebula (Gillan), Gamora’s ship is blown up and Nebula retrieves the orb, leaving Gamora adrift in space amongst the wreckage.  Quill rescues her, but not before he alerts Yondu as to his whereabouts.

On board Yondu’s ship, Quill convinces him to help retrieve the orb and join in the fight to stop Ronan (who has since absorbed the power of the Infinity Stone and has threatened even Thanos).  Quill devises a plan to stop him, and as Ronan heads toward Xandar in order to destroy it, the five disparate “friends” realise that only they can save the galaxy. 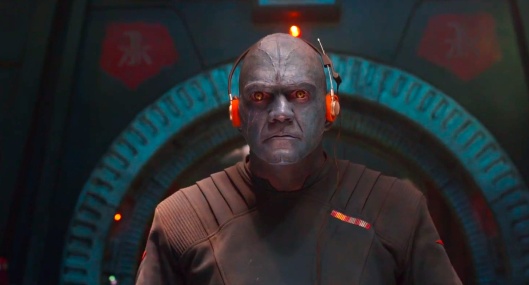 Long regarded as the riskiest move in Marvel’s assault on the box office, Guardians of the Galaxy is likely to be their most effective, most enjoyable and most well delivered movie for some time to come (and if there’s any justice in the cosmos, their most financially successful movie as well).  This latest instalment in Marvel’s ever-expanding Cinematic Universe is a joy to watch from start to finish, a winning combination of thrills, heroics, action, hugely impressive special effects, enthralling set pieces, well grounded characters, and laughs galore.  It’s a mix that could easily have gone wrong, but thanks to an assured hand at the helm in co-writer (with Nicole Perlman) and director Gunn, Marvel’s bold mov(i)e has paid off.

There’s so much to enjoy here that it’s hard to know where to start.  As an origin movie, Guardians of the Galaxy, at first glance, appears to paint in broad brush strokes, but as the movie progresses and we learn more and more about the characters and get to know them, their individual quirks and foibles become more established, until by the movie’s end, all five guardians seem like old friends.  Pratt takes Quill’s exuberance and cocky charm and establishes it as a cover for the more serious, more regretful character he really is, while Saldana takes Gamora’s hardened exterior – necessary as a daughter of Thanos – and gradually softens it to reveal a more caring demeanour underneath.  That they complement each other is expected, but their fledgling romance is played out with due reference to their differences, and never feels as stereotypical as it might have done given the conventions of the genre.

As Drax, Bautista takes his physical presence and subverts audience expectations – both of the character and his acting ability – by providing a clever, rounded performance that overcomes some arch dialogue and draws laughs from Drax’s literal interpretations of metaphors and analogies.  The WWE star has a great sense of comic timing and delivery and more than holds his own against his co-stars, even the CGI creations Rocket and Groot, whose odd couple pairing is the movie’s strongest suit, their friendship providing an indelible emotional heft.  Cooper invests Rocket with energy and devil-may-care recklessness, while Groot is just… Groot, Diesel investing his simple lines (“I am Groot”) with enough variation of delivery to make his meaning clear throughout.

With five great performances anchoring the movie so well, the supporting cast can only hope to hang on and keep up.  As Yondu, Rooker is all blue skin, pointy teeth and unconvincing thuggishness, while Gillan oozes venom as the villainous Nebula, her voice cleverly distorted to reflect her cyborg attributes.  Pace as Ronan is the antithesis of his role as Thranduil in The Hobbit trilogy, his sharp features broadened and cloaked in make up, his physical presence as threatening as his vocal manner.  And as Xandarians Corpsman Dey and Nova Prime, Reilly and Close offer sterling support (witness Nova’s conclusion after a less than satisfactory discussion with a Kree diplomat).

The performances are the icing on the cake, the story propelling itself forward with undisguised vigour, Gunn’s expert handling never losing sight of the wider story arc that is obviously to come in future movies and is hinted at towards the end.  The dramatic elements fuse well with the humour – Guardians may just turn out to be one of the funniest movies of 2014 – and the action set pieces are exhilarating, especially the aerial assault on Ronan’s ship, the Dark Aster.  There are a couple of missteps: Drax alerting Ronan to their presence at The Collector’s reeks of awkward (and unnecessary) plot advancement; and Thanos (Brolin) is just a guy on a throne, with no menace to him at all (no wonder Ronan betrays him).  But otherwise, the movie is a genuine winner, a crowd-pleaser for everyone of all ages.

Rating: 9/10 – a huge delight for fans and for newcomers alike, Guardians of the Galaxy cements Marvel’s position as global box office leader; with a post credits scene that is just sublime, this is one movie set in a galaxy far, far away that is (almost) pure entertainment from beginning to end.