Asked to look in on an old woman as a courtesy, Fort Dundas police inspector Hazel Micallef (Sarandon) finds the woman has been murdered, her throat cut and her mouth manipulated to make it look like she’s screaming. With help from fellow detective Ray Green (Bellows) she begins to investigate the murder but when another victim is discovered in similar circumstances, she begins to suspect a serial killer is responsible. She asks for help on the case and is sent Ben Wingate (Grace), an officer from Toronto; he’s a bit wet behind the ears but eager to help.

As previous victims are identified, Hazel discovers a religious aspect to the murders. She consults with Father Price (Sutherland) who tells her of a biblical portent that relates to the belief in the resurrection of the dead through the sacrifice of twelve willing individuals. Further murders occur but clues lead to a man named Simon (Heyerdahl); they also show the trail he appears to be taking across the country and the way in which he chooses his victims. Armed with this knowledge, Hazel takes a risk and sends Wingate to the home of Simon’s next intended victim… 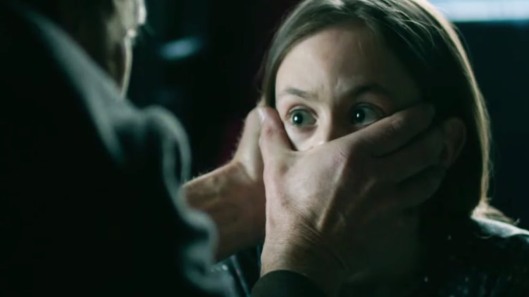 Pitched somewhere between Fargo (1996) and Se7en (1995), The Calling is a serial killer movie that, like many others before it, takes a biblical angle and makes it sound preposterous. It’s always difficult to provide a religious-minded serial killer with an entirely plausible reason for their actions, but this movie, with its otherwise cleverly constructed script by Scott Abramovitch (based on Inger Ash Wolfe’s novel), has a hard time making Simon’s motive credible, and fares even less well when it comes to the sacrificial elements – why does his victims have to be killed so horribly? It’s all too confusing and muddled to work properly and hampers a movie that goes about its business with a moody, unrelenting seriousness.

There’s a sterling performance from Sarandon as a detective with a drink problem, but even she can’t avoid comparisons with Frances McDormand in Fargo – though her level of world-weariness is more pronounced. Bellows and Grace offer solid support, as does Burstyn as Hazel’s over-protective mother, but it’s Heyerdahl who makes the most impact, his portrayal of Simon both unnerving and chilling in its quiet intensity. One scene with the daughter of a waitress is so unsettling it’ll stay with you long after the rest of the movie has faded from your memory. Stone directs with the eagerness of someone making their first feature (which he is), but reigns in the desire to show off and throw in everything including the kitchen sink. He has a pleasingly straightforward approach to framing and composition, and isn’t afraid to embrace some of the more awkward plot developments (basically, anything involving Sutherland). It’s a confident outing for Stone, but sadly, it only gets him so far.

Rating: 5/10 – an interesting premise that’s let down by its own explanation, The Calling is left feeling overcooked and underwhelming; fans of this sort of thing will see the final scene coming from a mile off, while anyone else will have lost any initial enthusiasm once Hazel consults with Father Price.